Cluster of micro-calcifications? Biopsy of the breast? Pathology? I was in information overload within about five minutes. I felt trapped inside myself with nowhere to go. I just wanted to sit in the middle of a lake and scream.

I reminded myself of the statistic that I was told by the radiologist -- 80 percent of the time this is nothing. I tried to be rational since I didn't have a family history of breast cancer, was under 40, and as an athlete led a very healthy lifestyle. I acted quickly and scheduled the biopsy within about 48 hours, as I just needed to get this over with. Every spare minute I had, I took more strokes on the water with my crew team. The water wouldn't talk back and I could release all of the feelings I had inside with good hard strokes on the water. 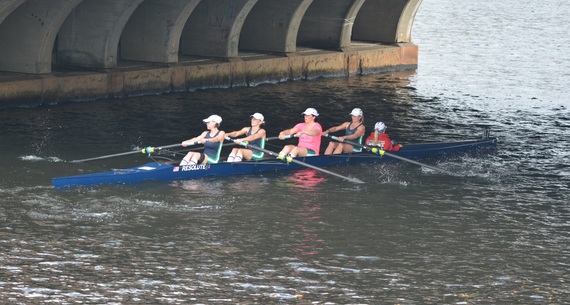 Right before the biopsy, I reached out to the two women who had been through this all before and that I had spoken to after the abnormal mammogram results. I felt like I needed to know what to expect with the biopsy and also the recovery. They both shared that I should go prepared with a tight fitting, front closing, sports bra. I was told this would be good to put on right after the procedure and to help with any swelling -- they were right.

Nothing seems to ever be straightforward with me, and the stereotactic biopsy itself wasn't either. For anybody that has been through a biopsy, you know how uncomfortable it is laying on your stomach with your breast hanging through the table. You are sitting there nervous as hell, though you are told to be completely still or they have to start it all over again.

I actually got through the whole procedure like a champ -- it wasn't until I was sitting up in a chair with a nurse pushing against my chest to stop the bleeding that I start to see spots and couldn't hear anything. The next thing I knew, I was surrounded by 20 people in white coats. Apparently I had passed out and triggered a hospital emergency -- my mom and husband saw the stretcher and flurry of white coats fly by them in the waiting room. Fortunately this was only a temporary setback that day, but the week to follow waiting for the results was unbearable.

The phone rang one afternoon when I was in the middle of a meeting and I instantly got a pit in my stomach. Within the first minute of the conversation, I entered a whole new world -- breast cancer.

In looking back over the year that followed recovering from a double mastectomy with reconstruction (and also caring for my mom who had the same surgery eight months after me which I'll talk about in the future) a lot has changed. While I can go back and look at the word "cancer" all over my notebook from that day last May, I like to focus on all the good that has come from this situation.