By Daren Butler and Jonny Hogg

MURSITPINAR, Turkey/ANKARA, Oct 8 (Reuters) - U.S.-led air strikes on Wednesday pushed Islamic State fighters back to the edges of the Syrian Kurdish border town of Kobani, which they had appeared set to seize after a three-week assault, local officials said.

The town has drawn international attention since the Islamists' advance drove 180,000 of the area's mostly Kurdish inhabitants to flee into adjoining Turkey. Ankara has infuriated its own restive Kurdish minority and its NATO partners in Washington by refusing to intervene.

Islamic State fighters hoisted their black flag on the eastern edge of the town on Monday but, since then, air strikes have been redoubled by a U.S.-led coalition that includes Arab Gulf states seeking to reverse the jihadists' dramatic advance across northern Syria and Iraq.

Intense gunfire and loud explosions could be heard on Wednesday morning from across the Turkish border, and huge plumes of grey smoke and dust rose above the town, where the United Nations says only a few hundred inhabitants remain.

"They are now outside the entrances of the city of Kobani. The shelling and bombardment was very effective and as a result of it, IS have been pushed from many positions," Idris Nassan, deputy foreign minister of the Kurdish-run Kobani district, told Reuters by phone.

"This is their biggest retreat since their entry into the city and we can consider this as the beginning of the countdown of their retreat from the area."

Islamic State had been advancing on the strategically important town from three sides and pounding it with artillery despite dogged resistance from heavily outgunned Kurdish forces.

Defense experts said it was unlikely that the advance could be halted by air power alone - a fact that left not only Washington but also the Syrian Kurds' ethnic kin across the border in Turkey demanding to know why Turkish tanks lined up within sight of Kobani had not rolled across the frontier.

The Turkish parliament voted last week to authorize cross-border intervention but President Tayyip Erdogan and his government have so far held back.

Many Turks prefer to risk alienating the Kurds rather than be sucked into a ground war in Syria, a prospect Erdogan says he would consider only as part of an international push that also sought to remove Syrian President Bashar al-Assad. 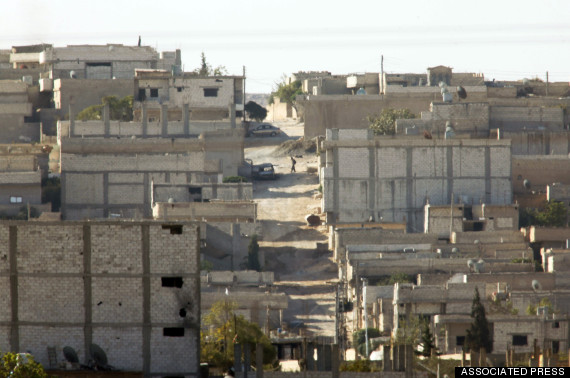 In this image shot with an extreme telephoto lens and through heat haze, as seen from Mursitpinar on the outskirts of Suruc, Turkey, at the Turkey-Syria border, a militant with the Islamic State group walks in the town of Kobani, Syria, during intensified fighting with Syrian Kurds, Wednesday, Oct. 8, 2014. (AP Photo/Lefteris Pitarakis)

At least 18 people died, Turkish media reported, and dozens more were injured on Tuesday as sympathizers of Turkey's outlawed Kurdish PKK militant group clashed with police and Islamists in the commercial hub Istanbul, capital Ankara and towns and cities across the predominantly Kurdish southeast.

Authorities imposed curfews in five southeastern provinces and sent troops and tanks onto the streets of Diyarbakir, the largest Kurdish city in the region, to try to quell the unrest.

An unnamed senior U.S. official told the New York Times on Tuesday that there was "growing angst about Turkey dragging its feet to act to prevent a massacre less than a mile from its border."

"This isn't how a NATO ally acts while hell is unfolding a stone's throw from their border," the official said.

Retired U.S. General John Allen, charged with building a coalition against Islamic State after it seized about a third of neighboring Iraq, was due in Turkey this week.

Ankara did say on Tuesday that it had urged the United States to step up air strikes against Islamic State to hold up its advance on Kobani.

But, while taking in Kobani's refugees and treating its wounded, Turkey has deep reservations about deploying its army, NATO's second largest, in Syria.

Beyond becoming a target for Islamic State, which is active along much of Syria's 900 km (550 mile) border with Turkey, it fears being sucked into Syria's complex civil war and perhaps even having to confront Syria's formidable army. 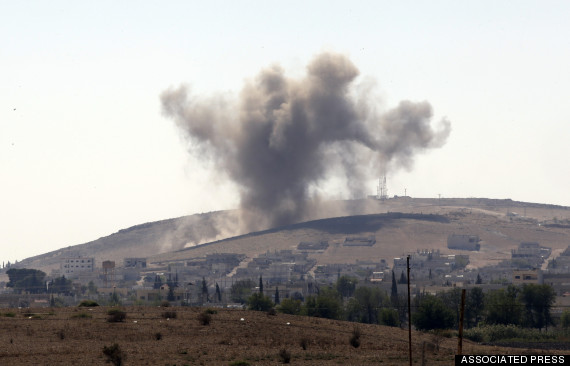 Smoke rises after a airstrike in Kobani, Syria as fighting intensified between Syrian Kurds and the militants of Islamic State group, as seen from Mursitpinar in the outskirts of Suruc, at the Turkey-Syria border, Wednesday, Oct. 8, 2014. (AP Photo/Lefteris Pitarakis)

Erdogan says Turkey will join the military coalition against Islamic State only if it also confronts Assad, arguing that the Syrian leader would otherwise take advantage of strikes against his foes.

Erdogan wants the alliance to enforce a "no fly zone" to prevent Assad's air force flying over Syrian territory near the Turkish border, and create a safe area for an estimated 1.2 million Syrian refugees in Turkey to return.

Washington, which has so far managed to bomb Islamic State positions in Syria without Assad raising objections, has not agreed to expand the mission to confront the Syrian leader.

Ilnur Cevik, a columnist in the pro-government Daily Sabah, said on Tuesday that Turkey would not allow weapons to reach fighters from YPG, the Kurdish armed group defending Kobani, or send troops into Syria unless it is threatened more directly.

YPG has strong links to the PKK, still viewed by Ankara as terrorists, despite the fledgling peace process.

"The government knows it cannot explain body bags coming from Syria to its Turkish majority with parliamentary elections only eight months away," he wrote.

"The only way Turkey will send its forces to fight (Islamic State) is if Turkish territorial integrity is threatened."

Abdullah Ocalan, jailed leader of the PKK, last week said a massacre of Kurds in Kobani would doom a fragile peace process with the Turkish authorities aimed at ending the group's 30-year fight for more autonomy, in which around 40,000 people have been killed.

The street protests across Turkey were already making the prospect of reconciliation with nationalists seem more remote, as protesters set fire to Turkish flags and attacked statues of the founder of modern Turkey, Mustafa Kemal Ataturk.

Selahattin Demirtas, co-chair of the HDP, Turkey's leading Kurdish party, condemned those acts, calling them "provocations carried out to prevent help coming to the east (Kobani) from the west." 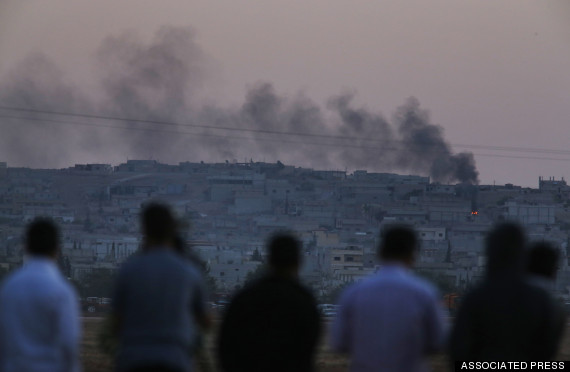 Turkish Kurds standing in the outskirts of Suruc, on the Turkey-Syria border, watch as smoke rises from a fire following an airstrike in Kobani, Syria, where the fighting between militants of the Islamic State group and Kurdish forces intensified, Tuesday, Oct. 7, 2014. (AP Photo/Lefteris Pitarakis)