(Reuters) - Turkey's president said the Syrian Kurdish town of Kobani was "about to fall" as Islamic State fighters pressed home a three-week assault that has cost a reported 400 lives and forced thousands to flee their homes.

The prospect that the town could be captured by Islamic State, who are now within city limits, has increased pressure on Turkey to join an international coalition to fight against the jihadists.

Islamic State wants to take Kobani in order to strengthen its grip on the border area and consolidate the territorial gains it has made in Iraq and Syria in recent months. U.S.-led air strikes have so far failed to prevent its advance on Kobani.

Turkish President Tayyip Erdogan said bombing was not enough to defeat Islamic State and he set out Turkey's demands for additional measures before it could intervene.

"The problem of ISIS (Islamic State) ... cannot be solved via air bombardment. Right now ... Kobani is about to fall," he said during a visit to a camp for Syrian refugees.

"We had warned the West. We wanted three things. No-fly zone, a secure zone parallel to that, and the training of moderate Syrian rebels," he said.

He said Turkey would take action if there were threats to Turkish soldiers guarding a historic site in Syria that Ankara regards as its territory. But so far Turkey has made no move to get involved in the fighting across the border.

Further pressure came from France, which said it was vital to stop Islamic State's advance on Kobani, and was discussing with Turkey what could be done.

"A lot is at stake in Kobani and everything must be done so that the Daesh (Islamic State) terrorists are stopped and pushed back," Foreign Minister Laurent Fabius told parliament. 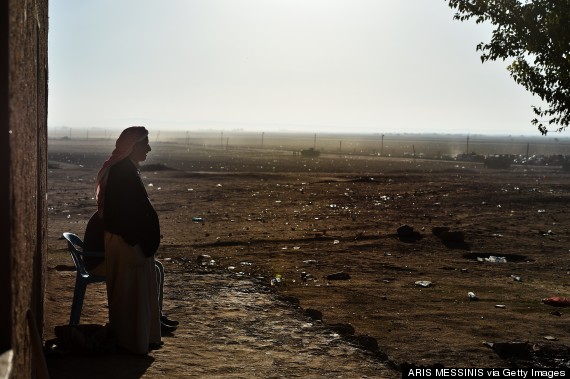 A Kurdish man looks across the Syrian town of Kobani from Suruc, Turkey, on Oct. 7, 2014. (ARIS MESSINIS/AFP/Getty Images)

But some analysts doubt the will exists among Western allies to take further action.

"It's the coalition of the unwilling, each country is doing the bare minimum, particularly in Syria," said Fadi Hakura at the London based think-tank, Chatham House.

From across the Turkish border, two Islamic State flags could be seen flying over the eastern side of Kobani. 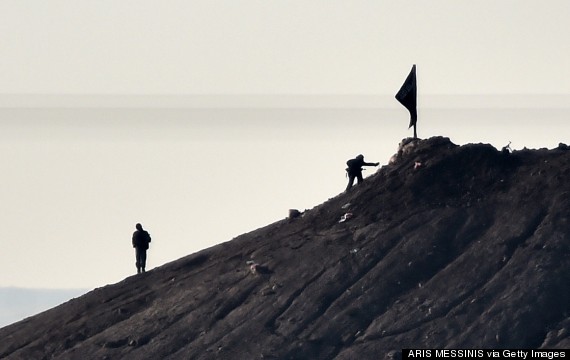 Alleged Islamic State militants stand next to a black IS flag atop a hill in the eastern part of Kobani, on Oct. 7, 2014. (ARIS MESSINIS/AFP/Getty Images)

The Syrian Observatory for Human Rights monitoring group said it had documented 412 deaths of civilians and fighters during the three-week battle for Kobani.

The U.S. military said it and allied air forces launched strikes on Islamic State in Syria on Monday and Tuesday. In the Kobani area the raids destroyed armed vehicles, a tank and a vehicle carrying anti-aircraft artillery.

On the ground, a burning tank, apparently belonging to Islamic State, could be seen on the western edge of town. There were also clashes on the northern fringe and mortar explosions could be heard to the northeast.

Islamic State, an al Qaeda offshoot, has ramped up its offensive in recent days against the mainly Kurdish border town, despite being targeted by U.S.-led coalition air strikes aimed at halting its progress.

"There were clashes overnight. Not heavy but ISIS is going forward from the southwest. They have crossed into Kobani and control some buildings in the city there," said Rami Abdulrahman, head of the Observatory, a group that monitors the conflict with a network on the ground. ISIS is a former name for Islamic State.

"They are about 50 metres inside the southwest of the city," Abdulrahman said.

An estimated 180,000 people have fled into Turkey from the Kobani region following the Islamic State advance. More than 2,000 Syrian Kurds including women and children were evacuated from the town after the latest fighting, a member of the Kurdish Democratic Union Party (PYD) said on Monday. 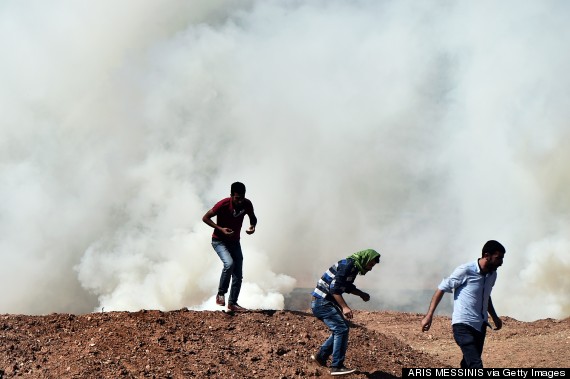 Kurdish people run away from tear gas as the Turkish army tries to remove them from the Turkish-Syrian border near Kobani in Turkey's Suruc, Oct. 7, 2014. (ARIS MESSINIS/AFP/Getty Images)

Before the offensive, Kobani, known as Ayn al-Arab in Arabic, was home to refugees from the civil war which pits rebels against President Bashar al-Assad and has deteriorated into hundreds of localised battles between different factions.

The most powerful of the myriad militias fighting against Assad, Islamic State has boosted its forces with foreign fighters and defectors from other rebel groups. It gained additional heavy weaponry after its fighters swept through northern Iraq in June, seizing arms from the fleeing Iraqi army.

The group released a video showing dozens of men said to be from Ahrar al-Sham, a rival Islamist group which has clashed with it in the past, pledging allegiance to its leader Abu Bakr al-Baghdadi, the SITE monitoring service said on Monday.

Westerners have also fought for the Kurds against Islamic State. A man describing himself as a U.S. citizen and former soldier from Ohio said in a video interview with Reuters inside Syria that he had come to join Kurdish fighters.

Identifying himself as Brian Wilson, he said other Americans had come to Syria to fight Islamic State.

The United States has been bombing Islamic State positions in Iraq since August and extended the campaign to Syria in September. Arab states have joined both campaigns, while other Western countries are participating in Iraq but not Syria.

Two months into the U.S. campaign, the U.S. military has added a new weapon to its arsenal in Iraq, using Apache helicopters for the first time, U.S. officials said on Monday.

Turkey, a NATO member which shares a 900-kilometre (500-mile) border with Syria and has the most powerful military in the area, has so far refrained from joining the campaign, but the plight of Kobani has increased pressure to act.

Turkey says the scope of the campaign in Syria should be broadened to seek to remove Assad from power. It has sought a no-fly zone in northern Syria, which would require the coalition to take on Assad's air force as well as Islamic State, a move Washington has not agreed to. 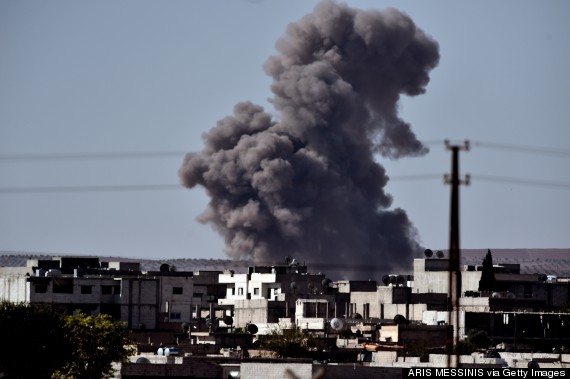 Smoke rises from the southwest of Kobani following air strikes, as seen from the Turkish-Syrian border in the southeastern town of Suruc on Oct. 7, 2014. (ARIS MESSINIS/AFP/Getty Images)

More than 20 Turkish tanks were parked on a hillside in circular formation around 1 km (half a mile) from the border.

Groups of mainly men travelled towards the border area to witness the clashes and protest against inaction by Turkey to protect Kobani. "Long live the YPG resistance" chanted a group of 20 men on a truck on the road to the town.

Turkish police fired tear gas and water cannon at dozens of demonstrating youths in a field near the border.

Thousands across Turkey’s predominantly Kurdish southeast have taken to the streets protesting in solidarity for Kobani.

In Geneva, angry Kurds held a protest at the United Nations, while in Brussels they invaded the European Parliament. They waved flags bearing the portrait of jailed Kurdish Workers Party (PKK) leader Abdullah Ocalan.

The brother of British aid worker Alan Henning, who was beheaded by Islamic State, said Britain should put troops on the ground in the Middle East to fight against the militants.

Kidnappings are common in Syria's civil war, often used for ransom. Catholic news agency Fides quoted Bishop Georges Abou Khazen, the Apostolic Vicar of Aleppo, as saying a parish priest and around 20 Christians have been kidnapped from a Syrian village near the border with Turkey.

A Kurdish man looks across the Syrian town of Kobani from Suruc, Turkey, on Oct. 7, 2014. (ARIS MESSINIS/AFP/Getty Images)