WASHINGTON -- A conservative advocacy group terrified young children and millennials on the National Mall with a hospital of horrors and knife-throwers Wednesday evening, an effort to scare them away from Obamacare.

Under a tent in the sweltering heat, the event featured games, junk food, a haunted hospital and a playlist that blared slightly dated songs such as Ke$ha's "Die Young." The catch was that all of the games were intentionally rigged against young people -- a metaphor for how Obamacare, some say, will disproportionately push costs onto younger generations.

The carnival was organized by Generation Opportunity, an advocacy organization that targets young conservatives and libertarians and is funded by the Koch brothers. According to spokeswoman Corie Stephens, the group has made health care a signature issue; last fall, it launched a campaign to persuade young people to opt out of health care, sending ambassadors to tailgating parties on college campuses. There they set up beer pong tables and ordered pizza, and they encouraged young adults to opt out of the health care law and pay the penalty.

Wednesday's event signaled the determination and occasionally absurd lengths that groups will go to as they try to keep the law as a political lightning rod four years after it passed. Attention has dwindled since the rocky rollout of the Obamacare website, when even Democrats were criticizing the administration. Since then, the law has become, seemingly, less divisive. An estimated 9.5 million people have signed up for health care coverage under the law.

Organizers of Wednesday's event tried to resuscitate some of the fear, mainly by using creepy carnival themes. A sign at the "strongman" booth said that Obamacare will cost the economy 2.5 million jobs (a claim that has been debunked), and a sign at the palm reader booth predicted that Obamacare will cause 90 million people to be dropped from their current health insurance plans (which has also been debunked).

Claire Milbrandt, who attended the event after some co-workers emailed her about it, said it was important for young people to learn the facts about the law.

"I think the most important thing is that they actually get informed on it. Actually don't just listen to what a news organization tells you, go and read the bill. Because when it comes down to it, pretty much everyone lies to you. You pretty much only know the truth if you look for yourself," she said.

One of the largest attractions was a haunted hospital, which had a long line outside it, meant to symbolize how long patients would have to wait to receive care under Obamacare. Inside the eerily lit space, attendees were herded through rooms filled with skeletons and overwhelmed "doctors" who tried to provide care.

In one of the rooms, attendees came before a three-person "death panel," placed on a platform with someone in an oversized and creepy Uncle Sam costume. (Yes, the same Uncle Sam that has been featured in other ads from the group.) The panel considered providing care for a hypothetical athlete who had broken both ankles; it determined the athlete was in good enough health to walk off the injury.

The last room presented displays on why government intervention in health care is wrong, citing historical examples, such as the Tuskegee syphilis experiments, lobotomies of mentally ill veterans and forced sterilizations.

Other highlights of the event included a makeshift dunk tank meant to symbolize a high-risk pool for young people and a bean-bag game where contestants aimed for holes that were labeled with different exceptions for those who did not have to comply with Obamacare. The acrobat was "bending the rules," and the ring toss represented "throwing money at empty promises."

A larger theme of the event was that Obamacare represents a massive government intrusion into individual lives and threatens personal freedom. Inside the hospital, an actor playing a "millennial" filled out a government form asking for his dog's maiden name, laptop password and ATM PIN.

Rep. Louie Gohmert (R-Texas), one of a few lawmakers invited to speak at the event, delivered a rousing condemnation, urging supporters to "help us get rid of Obamacare and get freedom into health care."

"Under Obamacare, the government gets all of your personal information," he said as his voice rose. "I was amazed at liberals saying, 'We want the government out of our bedroom,' and then they pushed through a bill that puts the government in your bedroom, your bathroom, your kitchen, your den. They're all over your house because of Obamacare."

But before attendees even entered the carnival, organizers asked for an extraordinary amount of personal information, including date of birth, ZIP code and political affiliation. In addition, some were handed a detailed political survey with mostly leading questions, such as "Is the government taxing Americans too much, too little, or not enough?"

Stephens said the carnival was another way to reach out to young people and make them skeptical of the health care law.

"What we wanted to do was put together a metaphor: a carnival -- it looks fun on the surface, it looks like something really enjoyable," she said. "[But] if you look at all the games, a lot of them are rigged against young people, so that's the metaphor we're going for with our premise on Obamacare."

The event drew many young people -- some for the free junk food -- but it wasn't clear whether it actually changed anyone's mind about the law. The only politicians who spoke were well-known Obamacare attack dogs, such as Gohmert and Rep. Paul Gosar (R-Ariz.).

Attendee Tom O'Brien said, "I like to be around people who have similar political views as me."

Others saw it as a political statement.

"I came because I oppose the government takeover of the healthcare system. Giant boondoggle, money-wasting, tremendous amounts of regulation. And just to generally express my displeasure at the way things are going in Washington," said Ian Everhart.

Sam Larson said he has not enrolled in health insurance for about five years because he doesn't think it makes financial sense.

Caitlin Grimes, an attendee, said she thought the event was creative, but took issue with its tone.

"The cost is going to be on millennials' backs," she said. "This is joking. This really shouldn't be a joke."

Some scenes from the event: 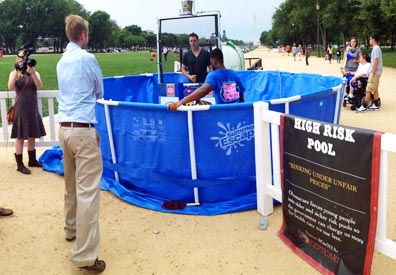 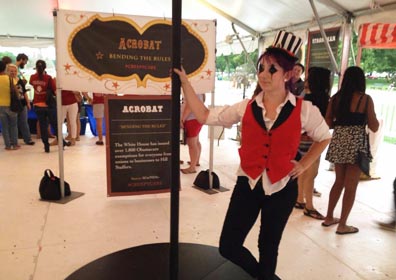 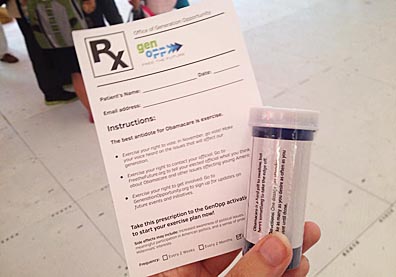