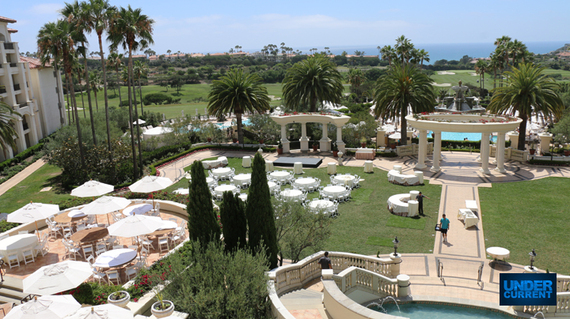 Donors and staff of the Koch brothers political network are descending on the St. Regis Monarch Bay Resort for their yearly summer seminar. Tables have been brought out onto the Grand Lawn; security personnel roam the halls; and Charles Koch himself has arrived.

After audio obtained by The Undercurrent from their summer seminar last year was released, the famously secretive Kochs and their fundraising hub, Freedom Partners, increasingly made efforts to appear more transparent. Their January meeting featured a live-streamed presidential candidate panel; they are openly working with Democrats on criminal justice reform; and Koch Industries has undertaken a big PR campaign called "We Are Koch."

That transparency, though, does not go very far. Earlier this afternoon, Freedom Partners' Executive Vice President of Communications James Davis approached this reporter in a passive aggressive manner offering answers to questions on their pet issues of criminal justice reform and ending corporate welfare. When asked to do so on camera, Davis declined. Perhaps he did not want to talk about this reporter's pet issues: the corrosive effect of big money in politics and climate change.

The welcome parties start tomorrow and the actual conference runs from Sunday through Monday. According to OC Weekly, the Kochs will receive a different kind of welcome from the left: a protest by supporters of progressive presidential candidate Bernie Sanders.