Why am I so sure that Koch Industries, the 2nd largest private corporation in America and major donor to the right-wing libertarian movement, has absolutely nothing to do with Tea Party Tax Day?

Because they told me so.

Melissa Cohlmia, Director Communication, Koch Companies Public Sector, sent an email to me (and I am assuming many others yesterday) stating that:

Because you have covered tea parties in the past and we imagine you will cover tomorrow's Tax Day Tea Party in DC, we want to reiterate some important facts.

Thanks for your consideration.

Given the fact that Koch and their foundations have dumped millions into some of the most vocal groups behind the Tea Party movement, like Americans for Prosperity, how can you not believe them?

Not to mention the fact that Americans for Prosperity was founded by David Koch himself or that the former president of AFP, Nancy Pfotenhauer, was the chief Koch lobbyist on Capitol Hill for five years. 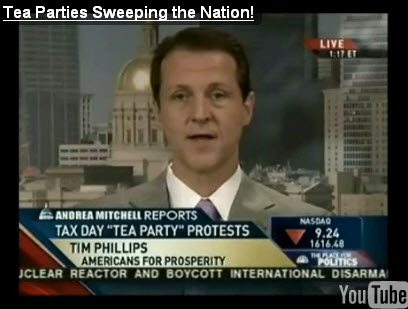 I'm just wondering why they sent this message out in the first place. After all, I normally don't send emails to bloggers telling them about things I'm not involved in:

"Dear Huffington Post, I just wanted to send you a quick note that I, nor anyone I know, had anything to do with that major hurricane off the Florida coast today."

The other thing I never understood about this communications tactic (maybe it's simple because I am terrible when it comes to accounting) is that when a company provides a whole bunch of money to an advocacy organization, like Koch provides to Americans for Prosperity, and the money goes into general revenues, how can that company unequivocally claim that they had nothing to do specific activities that the organization undertakes?

Do they have separate computers and phones in the office with sticky notes that say something like: "This equipment was paid for by the Koch Foundation, please refrain from using it for anything related to the Tea Party or Tea Party Tax Day."

If you've ever wondered what it means when people say you "can't have your cake and eat it too," this email from Koch explains it well.