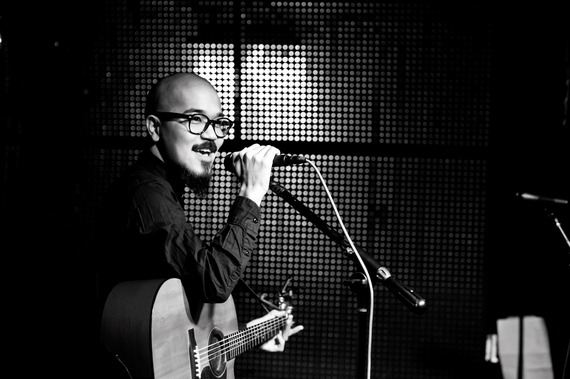 On top of being a singer/songwriter, Koji is also an activist, designer and photographer. He is truly a rare find these days. While most of us are struggling to get through the day, Koji is doing whatever he can to help other people. He lends his time and talent to several causes because he genuinely wants to make a difference in the world.

This year, he will be on the acoustic stage at the Vans Warped Tour. If you get the chance, check out his music, as well as activist groups that he has either created or supported.

1. I read that you're the Founder of Colormake. What was behind the idea for making the group?

Colormake is a collective of creatives, thinkers, activists. We do projects together in the worlds of art and activism. We started in 2007 and have been evolving and making work ever since.

2. You've also been involved with other activist groups, like Falling Whistles and The Voice Project. How have you been able to incorporate being an activist into your music?

When I was young, I really loved the DC punk scene and was inspired by the social action of bands like Fugazi or Bikini Kill. They were able to bring social issues into the music conversation and in many cases get people engaged with an action step whether that was voter registration, food drives, etc. In the same way, I try to use my time and talent to push forward positive change. I've been very fortunate to partner with organizations like Falling Whistles and The Voice Project on events, media, and political action. In the past few months, I've given away my discography to raise money and awareness for Doctors Without Borders' work in Ebola affected areas and organized food drives at my shows to combat hunger on a local level.

3. What do you think sets you apart from other musicians?

I don't think I'm any different from anyone who wants to make art. We have a human need to express ourselves and music has been that vehicle for me for my entire life. There are some people who do this for a career or for fame, but I'm making music to feel human.

4. Is there an accomplishment that you are the most proud of?

When I was a freshman in high school, I threw a firehall show that I organized, made the flyer for and played. It was really cool to do that because I had been going to shows at VFW's, American Legions, fire halls, basements, and barns in the Harrisburg area. All I wanted to do was be a part of the music community, a part of something bigger than myself. DIY changed my life.

5. How supportive has your family been of your career?

My parents are very supportive. They signed for the firehall rental (the show I was talking about before) and I paid them the rental fee from the doors. We had the house that the touring bands would stay at in Harrisburg. They've been my biggest supporters and taught me so much that goes beyond music or having a career. Both my parents were telling me to challenge paradigms and find my own answers from an early age while also stressing a responsibility to serve others. It's no wonder I got into punk and it's no wonder why I'm still curious, still learning. I'm very thankful to have such great parents.

6. If you had to sum up who you are in a paragraph, what would you say?

I'm just someone who wants to love and live well. It's a really humbling thing to know we're just here for a little while and it's been an honor to share my time with my friends, family, and music community.

7. So you're playing on the acoustic stage at the Warped Tour again. How do you feel about playing the Warped Tour? I only ask because I've heard a lot of grumbling about the lineup. However, I think the acoustic lineup looks and sounds pretty good.

To play Vans Warped Tour is a dream for a lot of people. I used to go see NOFX, AFI, Alkaline Trio, Hot Water Music, Anti-Flag, and bands like that when I was a kid. It was cool thinking that everyone from Green Day to Quicksand have played the tour. My cousin's band One Man Army used to play and I would go watch them and think to myself that maybe my band could play Warped too. To do the entire tour for a second time is a really amazing honor.

8. You're also a photographer. What kind of camera do you have? What's your favorite subject matter, as far as photography?

I'm in between camera's right now, but in my analog life, I shoot a Canon AE-1 and F-1. They're hand me downs from my father and grandfather. I keep it really simple usually, but I do like to shoot transparency film still. When I was in school for photography, people weren't sure if the whole digital thing would stick.

9. So here is your chance to tell people about causes that are important to you. And go!

I'm for expanding human rights for all people around the world. There are so many issues facing us today that it's hard to know where to start. What I think is most important, is to identify a need or an issue in your world and know that you can take action. Use that knowledge, your time, and talent and get involved. The media and advertising bombardment we face everyday leaves most people feeling powerless and voiceless, but the opposite is true. You have a voice worth voicing and things worth saying. Speak out!