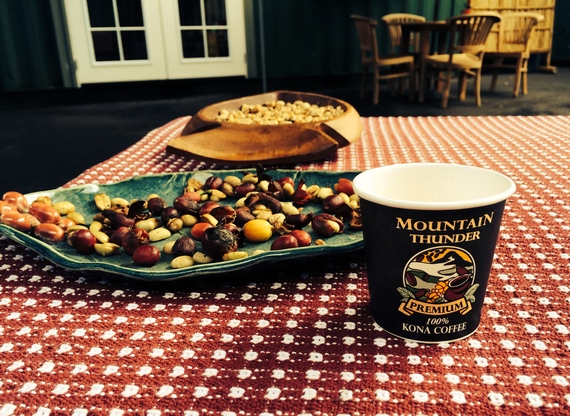 KONA coffee -- the cream of the coffee crop

When Pele, the mythical Hawaiian volcano goddess, spewed forth fiery molten lava from the Hualalai volcano, did she know she was laying ground for one of the finest coffees in the world?

High on the hillside, the Pacific Ocean shining below and the volcano rising above, lies the home of Kona coffee. Flourishing in the cloud forest (one level below the rain forest in elevation), a vine-clad jungle of giant ferns and tropical flowers surrounds the orchards of some very special coffee trees.

Like appellations of French wine, coffee can only be called Kona if it's from the Kona region, a swath of land that stretches in a 30-mile band above the southwest coast of the big island of Hawaii.

What's so special about Kona coffee? Like many Central American coffees, it's made from Guatemalan Typica, a strain of Arabica, the granddaddy of coffee beans of ancient origin. Just as early man first stood on two feet in East Africa, the first coffee plant rose off the ground in Ethiopia.

Missionaries first brought coffee to Hawaii in 1810, fortuitously following Hualalai's most recent major eruption of 1800-1801. Wiping out every living thing in its path including several villages, the eruption covered the slopes with a flow of lava that poured from crater to coast.

And as life on this planet is wont to do, destruction was followed by creation. It just happens that volcanic rock is remarkably rich in nutrients. As one islander told me, "You want something to grow in a lava field? Just add water."

But this is true for all the Hawaiian Islands, so why is Kona coffee especially good? The answer lies in the unique terroir of this band of land. At a latitude between eight and nine degrees north of the equator, the mild tropical climate gets just the right amount of rain on a well-drained soil. Sunny mornings are tempered by afternoon cloud cover that protects the plants from scorching in the sun. These propitious elements combine in a magical alchemy to produce a cup of joe that's aromatic, full-bodied and smooth, a java drinker's delight.

At 3,200 feet, these prime conditions are enhanced at the Mountain Thunder coffee plantation, the highest and largest organic coffee plantation in the Kona region. On rocky inclines, owner Trent Bateman grows 80 acres of Arabica beans organically- no herbicides, no pesticides, no GMOs. His coffee plants are nurtured with TLC. 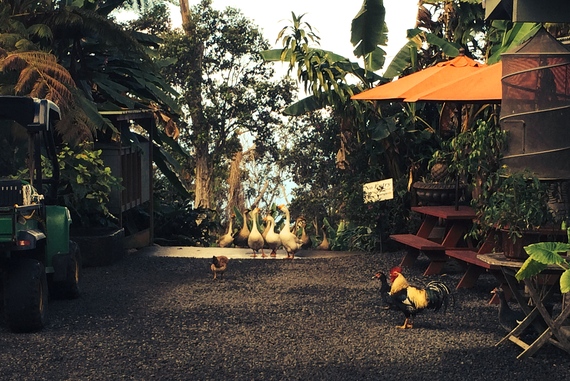 Cultivating coffee in a barnyard jungle

Twenty-five years ago when Trent bought his property, a transplant from Long Beach, California, the land was not considered particularly desirable. Neighbors told him it was too high and too steep to grow coffee plants. But when Trent's construction job dried up after a few years and he stood at the kitchen window one day mulling over what to do, he noticed that a single coffee tree outside his kitchen window had not only grown, but was full of red berries- the fruit that contains the coffee bean. So he cleared some land and planted more.

The steep grade of the property doesn't encourage running farm machinery, and this restraint dovetails nicely with Trent's organic operation, as the care and tending of his plants is done by hand, from planting to tilling to fertilizing to picking. Trent's wife and grown children make the plantation a family affair, along with a friendly staff and an assortment of useful if noisy barnyard animals. 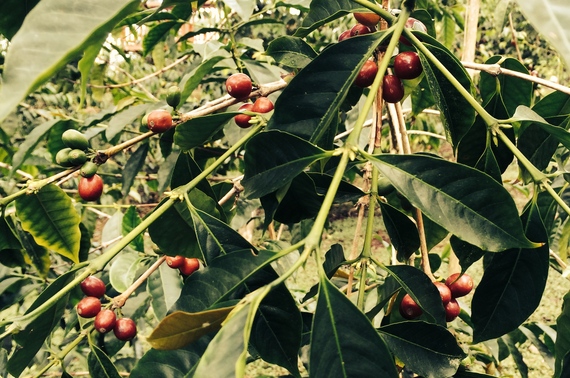 When the coffee tree fruits, its red berries -- called cherries although they look to me more like cranberries -- are handpicked and then subjected to a multi-step production process. The wet mill strips the cherries of their skin, leaving a mucousy film around the seed that aids in the fermentation, an 18-hour soak in water. (Why is so much good food and drink fermented? Beer, wine, cheese, bread, pickles... it's comforting to know there can be an advantage to rot.)

The fermented beans are raked across drying decks under a low translucent roof where the temperature rises to between 110 and 120 F. The beans are stripped of their outside skin (like that of an almond, but thinner) and then sorted. Like the sorting hat in Harry Potter, these machines determine the classification assignment for the beans.

First they are sorted for size in a machine with sieve-like filters of varying diameters. Then they're sorted by density on an air-pressured, vibrating canvas that performs the ultimate shakedown, separating the whole, heavy beans from the broken beans, the runts and any remaining twigs. Finally they are sorted by color in the photo-sensing machine, a kind of mechanized segregation. 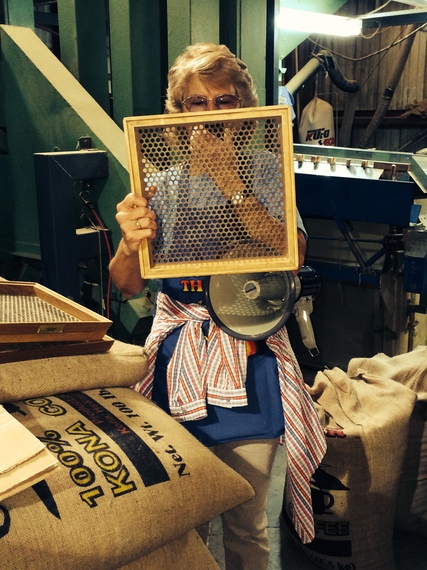 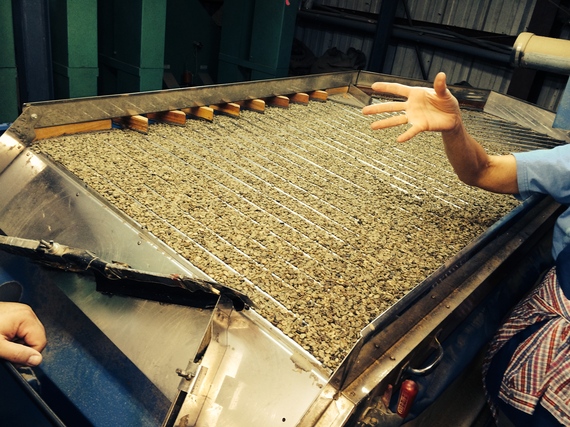 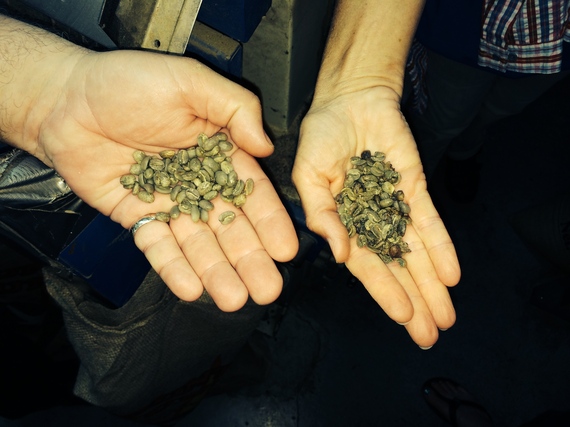 Beans are sorted for size, shape, density and color

Now the beans are with their own kind, divided into an assortment of grades, from the Brahmin beans of Cloud Forest Reserve to the less-is-more Peaberry. This runt-of-the-litter bean is the darling of experienced cuppers (coffee tasters), who makes a virtue of its small size, claiming it delivers an intensified flavor.

Mountain Thunder's prize-winning coffee (awarded 1st place at the 2013 Kona Coffee Cupping Competition as well as the Certified Gold Bean Award from SIAL's coffee competition in Montreal in 2012, among others), the best of which sells out at fifty-eight dollars a pound, is testament to the promise of finding new life where least expected -- for the Bateman family, for the Arabica coffee bean, for the land under the volatile volcano. The lesson? Drink up. With the right elixir, rebirth can happen anywhere. 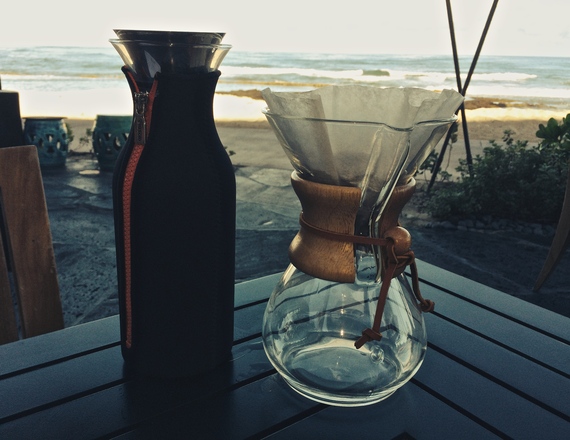