"It may have been just noise to you and inspiring for someone else, but at the end of the day, it's still a waterfall." -- Modified anonymous quote via Facebook

A Challenge to Experts and a Call for Productive Engagement

The controversy surrounding the Kony 2012 campaign (nearly 80 million views) has focused primarily on the responsibility of activists to understand the conflict in Uganda, communicate it honestly to their audience and advocate for constructive solutions. Equally as important, however, is the responsibility of recognized experts (of academic, professional or personal experience) to positively engage an expanding international audience interested in human rights and Africa -- an audience that is potentially now nearly three times the size of Uganda itself (33 million). While there has emerged some constructive criticism on the content of the video and purpose of the organization (e.g., here and here), these have been outnumbered by arguments that shut down the possibility of channeling this new found enthusiasm for good.

But if the primary argument against this video is that the road to hell is paved with good intentions, it holds true for both activists and experts. Most critics from the expert community do themselves and their cause a disservice by relaying hyperbolic and unhelpful criticism.

To be sure, there is a conversation to be had about the role of the West in development, transparency in funding and the purpose of advocacy organizations. But the conversation needs to occur in a manner that does not turn people away from participating in causes greater than themselves to affect positive change.

Whether rightly or wrongly, Invisible Children has made it cool to care about Uganda. Perhaps the organization and its work speak to you, perhaps it doesn't. What is certain is that there is currently unprecedented enthusiasm among the people whom Kony 2012 spoke to - the young. This is a critical opportunity to engage them and to help channel their enthusiasm to learn more and be better global citizens. And they don't deserve to be criticized for caring. 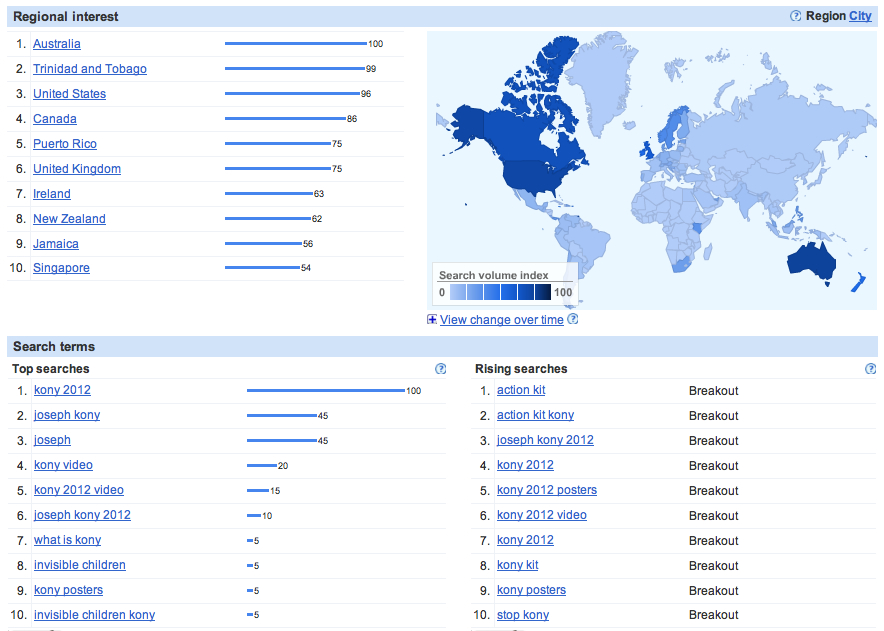 Visualization of Google searches for "kony" since 2004.

The terms "activist" and "expert" are better understood as overlapping identities instead of mutually exclusive positions. Activists are often well informed on their pursuits and experts are among the most passionate for affecting positive change. An activist acts with the intention to affect positive change, while an expert has the necessary qualifications to do so. With that understanding, the threshold to become an activist could be considered low (including "slacktivist" behavior such as sharing a video or buying a bracelet), while the threshold for an expert is significantly higher. But experts do not just appear out of nowhere -- they have to start somewhere on the ladder of engagement.

There is understandable skepticism on the value of counting viewers of online videos as activists and raising awareness for a solution with which one does not agree. Fair enough. Let's look at it another way: Where do experts come from?

If you consider yourself an expert on a topic or region, you most certainly started at a point of curiosity, perhaps a college campus. You probably watched or read something that got you fired up about a particular issue in another part of the world. Then you researched, visited the area, talked with those affected and realized that it was much more complex and nuanced than you originally thought.

What if right now there are 100 million potential more yous out there, seeking your guidance? Let's settle on 10 million and still be amazed. If just one in one hundred of those 10 million seek out the education, experience and nuance, we are now left with a cadre of passionate and involved 100,000 experts -- impressive by any measure. The bottom line is that the inspiration has been served.

You might say, "If I knew then what I know now..." But that's exactly it: You may never have started, especially if a respected peer attacked you for being involved. Since you do know far more now than you did then, this may be your chance to help others skip some painful learning experiences in the process. Actions do matter more than intentions, but the intention to inform the debate from your perspective is not enough; it has to be done responsibly. If you are criticizing because you care about the future of Uganda, then please care enough to do so in a manner that keeps the conversation going.

What Can Be Done Right Now: Partnerships between Knowledge and Influence

The simple solution is to encourage civilized dialogue. However, a brief scan of the comments sections throughout the blogosphere would scare away even the most knowledgeable and well intentioned critics and activists. Civility is an important lesson but only part of the problem. Central to the argument critics take is the lack of the ability of those newly interested to understand the concepts at work.

Here is the opportunity to engage, to educate, innovate and to democratize the "expert knowledge." It is imperative on us to ensure that the work that experts do resonates with the next generation of citizen activists, philanthropists and voters.

One such solution would be to encourage think tanks and advocacy organizations working on high-level or "complex" matters to team up with the organizations with strong will and social marketing strengths.

One example, "Exploring Humanitarian Law," is a toolkit developed by the American Red Cross for use by educators and youth leaders to teach the principles of international humanitarian law (a "complex" issue) in the classroom. Projects such at these are designed to bridge the information gap and create a future of well informed adults, whether they become activists or not.

There is a lesson to be learned here: combining the knowledge produced by high level advocacy organizations with the incredible reach of Invisible Children's recent campaign will yield a potent mixture of knowledge and power. This combination and could shape the arena in which America's young adults learn the tools and knowledge that will inform a more productive and positive relationship with not just Uganda, but the rest of the world.

With the expansion of media production and dissemination evidenced by Kony 2012, it's no longer possible for the expert community to keep the activists out of this complex conversation. Attempting to do so will only dampen valuable enthusiasm or create disastrous disconnects between doers and thinkers. The only practical response is for experts to positively engage this expanding global dialogue and to teach the conversation upwards.

Activists are still responsible for their message and will unquestionably benefit from expert scrutiny. But right now there are potentially hundreds of millions of youth interested in Uganda and hungry for guidance. They may not be there tomorrow unless we are willing to engage.

Co-authors: Christopher Neu and Kevin Malone are facilitators TechChange for the online course: Global Innovations for Digital Organizing. Chris and Kevin have differing perspectives on the current value of the #StopKony campaign, but are excited about the potential impact for social media and human rights. They're happy to continue the discussion @TechChange.