EDITOR'S NOTE: To find out more about Lee's quest for the unusual history of Chinese food in America and to see the fortune cookie that could've made you a millionaire, watch the talk above.

When a dish really hits a nerve with the American palate, it can really take off across the entire country, facilitated by food vendors' freedom to copy good ideas. We saw it happen with General Tso's chicken. We're seeing it happen with other Asian-influenced culinary creations too.

When I was researching my book on Chinese food in America, The Fortune Cookie Chronicles, which was the basis of my TED Talk, it puzzled me why Korean cuisine (unlike many of its Asian brethren) had not gone mainstream yet.

Chinese, Japanese, Thai, Indian and Vietnamese restaurants had all hit critical mass, with footholds in suburban towns. But Korean cuisine remained mostly ensconced within Korean-American communities, with an occasional lone outpost defiantly offering bibimbap. This puzzled me, because Korean savory barbecued meats -- short ribs, grilled marinated beef -- should be widely appealing to an American palate which never met a barbecue recipe it didn't like. But Korean restaurants basically remained serving Korean clientele, with the occasional Chinese family, like mine, that celebrated our Thanksgivings there. 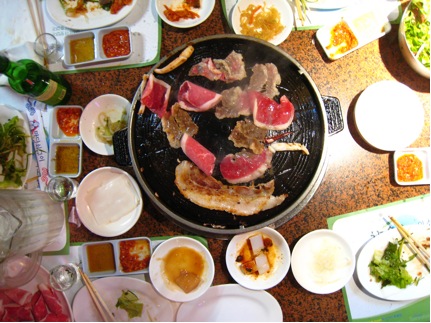 I came up with various hypotheses to explain the roadblock: the names of Korean dishes were too strange and not descriptive enough (bulgogi and kalbi versus the very clear "beef and broccoli"). Kim chee had given Korean cuisine a pungent image in American minds. Korean immigrants had been siphoned into groceries and other retail industries. The Koreans who did open restaurants found it easier to sell Japanese or Chinese cuisine.

Pho, pad thai, ramen had all lapped jap chae in a race to the American plate.

But then boom! Kogi Korean BBQ-To-Go in Los Angeles burst into national consciousness in 2009 and developed a cult following with tens of thousands of Twitter followers. The formula was so simple, it was a wonder that it hadn't been done before: put the yummy Korean meats in Mexican tortillas, and you are ready to roll. Burritos, tacos, quesadillas. It was aided by a charismatic Twitter account and the low overhead of a food truck, and a movement was born. 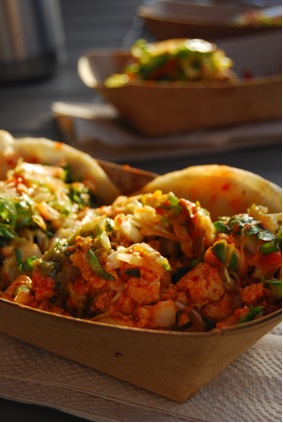 It's a concept that is truly the product of Los Angeles stir-fry (not melting pot!) in one bite: Korean and Mexican -- two immigrant populations which have made Southern California an extension of their native homes. And it was the second generation that dared to make it happen.

Like General Tso's chicken, the concept spread because of distributed open-source copying through a network of food vendors. -- Jennifer 8. Lee

Like General Tso's chicken, the concept spread because of distributed open-source copying through a network of food vendors. It's been echoed by dozens upon dozens of food trucks nationwide, from Korilla BBQ in New York, to Chilantro in Austin, Marination Mobile in Seattle. "Korean taco" now has its own Wikipedia page.

This blending of Asian and other regional cuisines has been become entertaining to watch over the last half decade. Vietnamese banh mi sandwiches (themselves already a product of French colonial presence in South East Asia), have developed sloppy joe and catfish versions (at Baoguette in New York), as well as a Vietnamese-Polish edition made with kielbasa. And you can chimp on banh mi sliders and banh mi tacos at The Peached Tortilla in Austin. 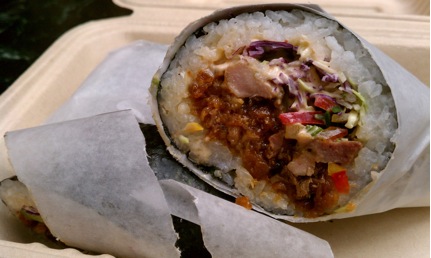 Now I'm waiting for another Asian-Latino concept to take the country by storm: sushirittos, burrito-sized sushi rolls. There is the namesake establishment in downtown San Francisco, as well as Jogasaki's sushi burritos in Los Angeles, and Wrapmi in Boston.

My Japanese friends were slightly terrified when they encountered them. It was like encountering a genetic mutation from outer space. Supersizing maki rolls is just so, so American, they said.

It's true. It is so American. That's what makes it wonderful. Watch for the yummy seaweed logs, they are coming to you.


This story appears in Issue 45 of our weekly iPad magazine, Huffington, in the iTunes App store, available Friday, April 19.