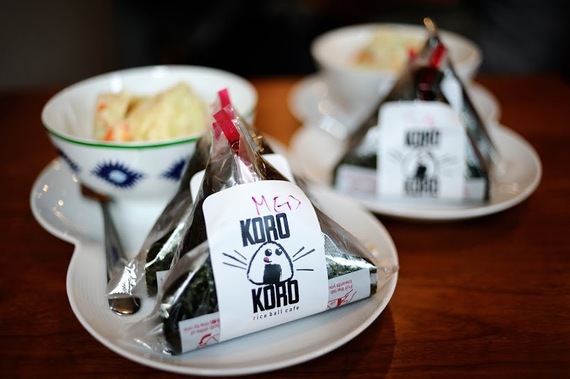 When it comes to food, simple often equals delicious. Jersey City's latest culinary treasure, Koro Koro Rice Ball Café, sharing their recipes for Japanese rice balls or onigiri, appears to follow that exact philosophy - and they have been tremendously successful only a week after opening. Koro Koro is located at 538 Jersey Avenue in Downtown Jersey City.

"We sold about 480 rice balls on our best day so far, and we already have returning customers," owner Carrie Grosso explains, visibly happy about the warm welcome the Jersey City community has granted. "Honestly, we weren't prepared for such great response," business partner Vincenzo Bove confirms. 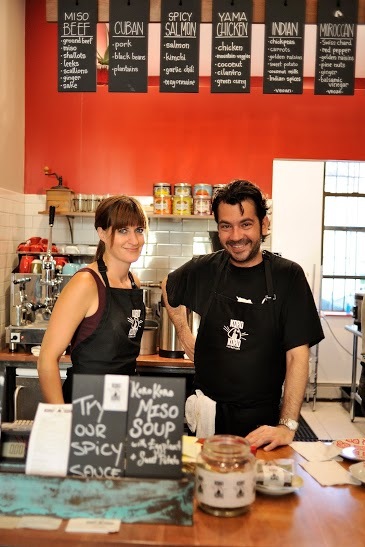 Both are familiar faces in Jersey City's gastronomical scene. Businesses such as the former Café Basic, now Choc Au Pain, Madame Claude's, and the Mexican eatery Taqueria have been former domains. It was only a question of time until the two of them felt ready to start their own venture. "The first time I had rice balls was in Los Angeles, and I thought it was the best food I ever had," Grosso remembers.

Koro Koro is the only venue in the New York Metropolitan area that sells rice balls exclusively. Many restaurants in New York City offer them as an item on the menu, but none of them dedicates their entire business to the delicious snack that so easily could pass as the 'sandwich for the conscious eater.' In Japan however, specialized shops for rice balls are not uncommon.

The ingredients for Koro Koro's experimental collection of an otherwise traditional dish often come vegan and/or gluten free. Usually, an onigiri is filled with pickled ume (umeboshi), which are Japanese apricots or plums, salted salmon, katsuobushi, which is dried, fermented and smoked tuna, kombu, which is edible kelp, tarako, salted roe, or any other salty or sour ingredient serving as a natural preservative. "The beauty about this dish is that it can work as a perfect vessel for different cuisines," Grosso explains. And so it does.

The Cuban rice ball contains pork, black beans and plantains, while the vegan Indian rice ball enchants with chickpeas, carrots and sweet potato, and it is understandable that the Mediterranean version cannot spare the black olives. A menu as diverse as America, offers something to satisfy any taste. A total must and a great side-dish is the homemade Japanese potato salad that goes so well with any of the onigiri. Yummy, sticky rice with the inevitable surprise at the core wrapped in seaweed: who could say 'no' to that? 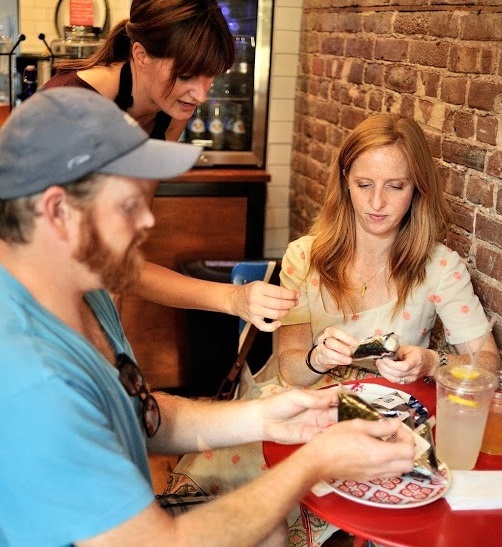 Unwrapping the rice balls takes a bit of skill.

The prep work is labor intense for a total of four people running Koro Koro. "At the moment we have up to sixteen hour days, and we are still trying to figure out operations completely," says Vincenzo Bove, who recently managed and firmly established the New York City branch of Jersey City's Taqueria Downtown. Bove as well as Grosso confirmed that finding a business space in Jersey City, in particular for a small to middle-size venture can prove to be somewhat difficult, with the rents increasing at the pace they are. "We are very lucky and happy to have found this space. As it turns out, the foot traffic is very consistent," Grosso explains. 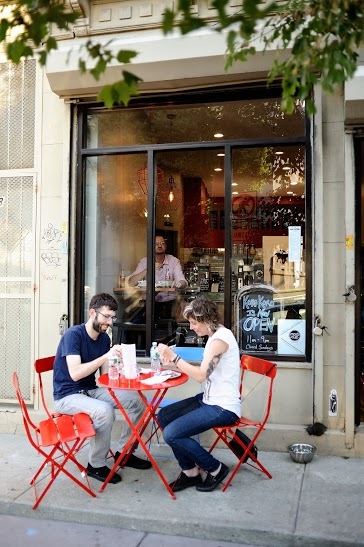