Recently, many Muslim countries and Muslim minority communities have fallen back into conflict. The U.S., Britain and France have experienced new terrorist attacks, Turkey has seen spreading urban protests against its Islamist government, and horrific bloodshed continues in Syria.

In the Balkan republic of Kosovo, with a Muslim majority around 80 percent, a different spirit is visible. On May 23, during a week of events promoting "tolerance and reconciliation," the Kosovar Albanian government dedicated a monument of remembrance to the nearly unknown place of Kosovo in Jewish history.

The stone slab was erected within the gated courtyard facing the country's parliament, in the capital, Pristina. It reads, "This is the place where the last Synagogue [in] Kosovo stood until 1963. This plaque is raised in memory of Kosovo Jews that perished in Nazi camps during [the] Holocaust. [The] People of Kosovo will never forget them."

The commemoration was attended by representatives of the official Islamic Community apparatus and the Catholic Church -- Kosovo's main Albanian religious minority -- joined by politicians and diplomats from many countries.

Inauguration of the memorial was carried out with great solemnity by uniformed members of the Kosovo Guard, a ceremonial body, since the republic now has no armed forces. Kosovo prime minister Hashim Thaci, a former commander of the Kosovo Liberation Army, delivered official comments. He referred to the Holocaust as an "inconceivable crime that happened in Europe and which changed the paths of our societies in the last six decades."

Thaci pointed out that Kosovo had been a way-station for hundreds of Jewish refugees from the Balkans and other parts of Europe, who were protected in Albania. He affirmed, "They found safe passage in our lands ... sadly few among the millions who perished."

During Thaci's remarks the Muslim call to prayer was heard from a nearby Ottoman-era mosque. Following the prime minister, Israeli diplomat Yosef Levy commented on the coincidence as symbolic of interfaith harmony. He declared that Israel would not forget the rescue of several thousand Jews by Albanians.

Rabbi Levi Matusof, a European Jewish leader, recited a psalm and prayed in honor of the Kosovars.

Albanian scholar Saimir Lolja, in an article titled "The Rescue of Jews in Kosovo," published in the English-language weekly Tirana Times, described how protection of Jews from the Nazis in the Albanian lands during World War II was undertaken by Muslims, Catholics and Orthodox Christians. One Kosovar Muslim man, Arsllan Mustafa Rezniqi, has been honored as "Righteous Among the Nations" by the Holocaust memorial center at Yad Vashem in Israel. Rezniqi constructed a house on his property to shelter Jewish families.

A handful of Jews were deported from Kosovo after a Nazi-directed raid in mid-1944. But most Jews who went to Kosovo and Albania were saved by local officials who provided them with false identity papers, or moved them from place to place. The Germans, who occupied Albania in 1943, demanded a list of Jews, and authorization to deport them, from the Albanian authorities, but were told that jurisdiction over the Jewish community belonged to the Albanian government alone. This action was recognized by Yad Vashem in 1998.

The placement of the memorial to the lost synagogue of Pristina elicited some critical comments from Kosovar personalities. But nobody objected in principle to its installation. Leka Rezniqi, grandson of the aforementioned Arsllan Rezniqi, and an activist in the Kosovo-Israel Friendship Association, questions whether the location of the synagogue, demolished under Communism, has been correctly identified.

Kosovo Assembly vice president Glauk Konjufca of the "Self-Determination" movement, which stands in opposition to Thaci and the current administration of the country, found it unsatisfactory that the memorial was set up in a space that is not visible to the public.

Otherwise, however, Kosovo opinion expressed enthusiasm about the recovery of their small part of Jewish memory.

The Kosovo government has also pledged to construct a Museum of Kosovo's Jewish Heritage. A vestigial Jewish presence long survived in the historic Kosovo city of Prizren. Before the 1998-1999 NATO intervention in Kosovo, the community was headed by Nexhat Fetah, son of a Jewish mother and Muslim father. The Kosovo Jews are led currently by Votim Demiri, who participated in the activities surrounding the synagogue plaque.

In most Muslim lands and in many formerly Communist countries, the Jewish legacy has been treated ambivalently at best. The Jewish people were devastated by the Holocaust, and then by the post-1948 expulsions of Arab-speaking Jews to Israel, along with anti-Jewish discrimination in Soviet Russia and Poland. By contrast, in the Balkans, Jews are prominent in Bosnian cultural and political affairs and celebrated in Kosovo public life. The moderate Muslims in these countries deserve encouragement for their proven commitment to mutual respect between differing faiths. 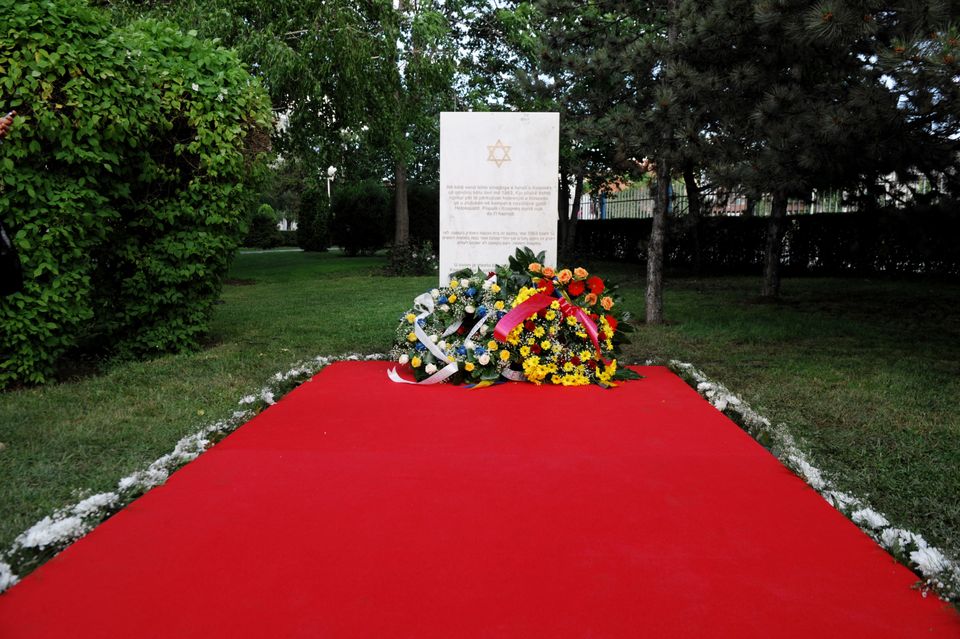 1 / 4
Flowers are placed in front of a plaque in Pristina on May 23, 2013, during an official ceremony of the Commemorative Plaque remembering Kosovo Jews that Perished in Holocaust, at the site where the last Synagogue of Kosovo stood until 1963. (ARMEND NIMANI/AFP/Getty Images)
Getty Images