**Scroll down for photo**

Mason Dash Disick (dad is longtime boyfriend Scott Disick) can be credited for keeping his parents together after a rough patch, Life & Style reports. The full interview, excerpted below, and photo shoot can be found in the issue on newsstands now.

L&S: Congrats! How does it feel to be parents?
Kourtney: It feels amazing. It's just so indescribable. You don't get how good being a parent feels until it happens to you.
Scott: My first time holding him was definitely special. But holding him the second time was even more special, and the third time was even more special than that. I fall so much more in love with this kid every day. I can't imagine how much more in love with him I'm going to be by the time he's 5 or 10 or 20!

L&S: How was the labor itself?
Kourtney: It was surprisingly easy and just an incredible experience. I always thought your first is supposed to be really hard, but it was easy. I have an amazing doctor. He actually delivered me! The room environment was just so relaxing, and everyone I wanted to be there was there--Scott, my mom, Kim and Khloe. No one under 18 is allowed in, so my little sisters Kendall and Kylie couldn't come in. Actually, you're only allowed to have two people in the room because of the swine flu -- so we snuck Kim and Khloe in!

L&S: What is your daily routine like now?
Kourtney: We're on Mason's schedule, waking up every couple of hours to breast-feed. But it's fun to get up and see him. I miss him by the time I see him again.

L&S: Can you see having another baby in the future?
Kourtney: Right now I'm obsessed with Mason and want to give him all my time. But being with him has definitely made me think about having another one! Kim and I are 18 months apart. Growing up, we did everything together. It would be nice for Mason to have a little brother or sister that many months apart too. 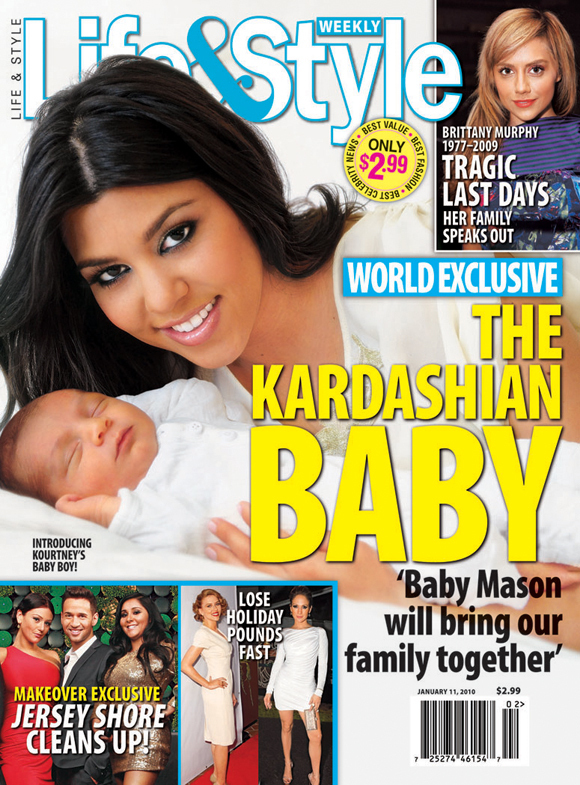