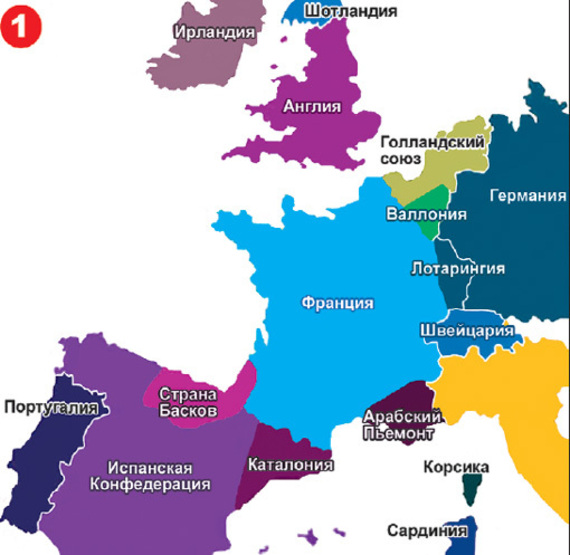 What do the denizens of the Kremlin and their new tsar dream about?

Wealth? Perhaps. With a personal fortune estimated to be anywhere from 14.5 billion dollars (Forbes) to as much as 200 billion dollars, it's hard to believe that Vladimir Putin dreams about amassing even more wealth. The rest of his gang is nowhere as rich, but one imagines that all of them have gotten a generous share of the Russian spoils that now flow through the Kremlin.

Power and might? A return to the glory days of the Soviet Union and the restoration of the Russian state's historic status as a superpower? Perhaps.

Back on June 9, 2012, the Russian tabloid Express Gazeta published a series of maps that depicted how the nations of Europe might look in the year 2035.

The Gazeta claimed that its projections had been put together using "open source" information that it had obtained from the CIA and other intelligence agencies, and after consulting well-known futurists and foreign policy and geopolitical analysts.

The tabloid has not historically functioned as a mouthpiece for the Kremlin. Nor is it visibly affiliated with any of the various factions that dominate the higher echelons of the Russian government. In Russia it is considered a sensationalist tabloid. Nonetheless, so far, in light of the Russian invasion of the Ukraine and the recent "Brexit" vote in the United Kingdom, its projections are proving to be remarkably prescient.

In the 2012 maps, the Crimea was shown as Russian territory, two years before the actual seizure of the region by Russian forces. The Donbas basin in eastern Ukraine, much of it currently under the control of pro-Russian separatists, was shown as having been incorporated into Russia, as was the entire Black Sea coast of Ukraine from the Don River to present day Moldova.

Scotland was shown as being a separate, independent nation. Northern Ireland had joined Ireland and Great Britain had been reduced to its 13th century boundaries of just England and Wales. All very plausible scenarios in light of the UK's recent vote to leave the European Union (EU).

What about the rest of Europe? According to the Express Gazeta, Europe in 2035, is a continent in disarray. Powerful separatist currents driven by ethnic and nationalist sentiment have significantly disassembled centuries of European nation-building, leaving many countries far smaller than their present boundaries.

The tabloid makes no reference to the state of the EU, but it is hard to see how the EU would have survived these powerful nationalist forces of disintegration and ethnic conflict. 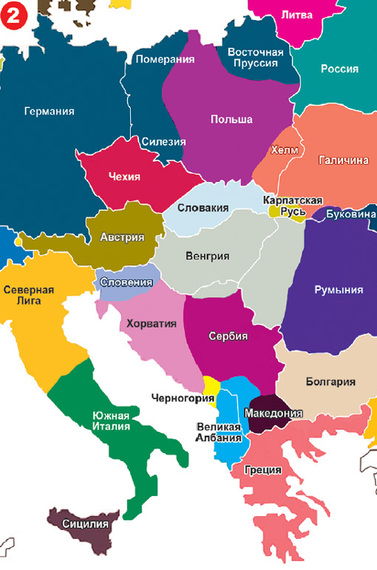 In 2035 Europe, ethnicity and nationalism are the dominant forces shaping European politics. Italy has divided into four separate nations; the rich industrialized North has finally cut loose the indolent South. The new border now runs between Tuscany and Lazio. Sardinia and Sicily have both gone their own way. Spain, too, is a fragmented version of its former self, with Catalonia and the Basque country both having achieved independence. In the latter case, the new Basque nation also absorbed portions of France.

In what must be the ultimate Polish nightmare, Germany has expanded eastward, reclaiming its former regions of Pomerania, Silesia and East Prussia, while Russia has seized additional Polish territory in the east. This must have been the third German-Russian dismemberment of Poland.

For its part, Russia has also reclaimed a broad region of ethnically Russian territory from the Baltic states to Romania. The Gazeta makes no references to what kind of diplomatic and political influence the Kremlin can now extend over Europe, and especially over its former satellites, but given the obvious disarray of the EU and European politics, it's safe to assume that Russian influence would cast a long shadow over European affairs. The tabloid makes no reference to NATO, but it's hard to see how NATO would have survived this continent-wide political upheaval.

France has retained most of its historic territory, with the exception of Corsica, which is now independent, and the former regions of Alsace and Lorraine, which are now part of Germany. French Savoy has become a separate "Islamic Rhone-Alpes" where Paris, finally realizing that it would never assimilate its Islamic citizens, has resettled its Muslim nationals in their own independent state.

Elsewhere the forces of disintegration reign supreme. Belgium has disintegrated into ethnic halves, with the Flemish portion joining its Dutch cousins. The Balkans have returned to their 19th century chaos. Bosnia-Herzegovina has disappeared, having been divided between Croatia and Serbia.

Turkey has seized the predominantly Turkish ethnic areas around Burgos in southeast Bulgaria, while Hungary has regained some of its historic, pre-World War I lands.

While the maps are hardly an official statement of Russian foreign policy aims, their underlying implications are in fact consistent with the broad themes of the Kremlin's policy in Europe.

First, that a powerful Russia is a force of stability in Europe and is the only power able to contain German ambitions. Significantly, in the Russian projections of 2035 Europe, Germany is the only major European country that actually enlarges its borders, and it does so by reclaiming territories from Poland and France that have historically been at the center of long-standing and bitter conflict. 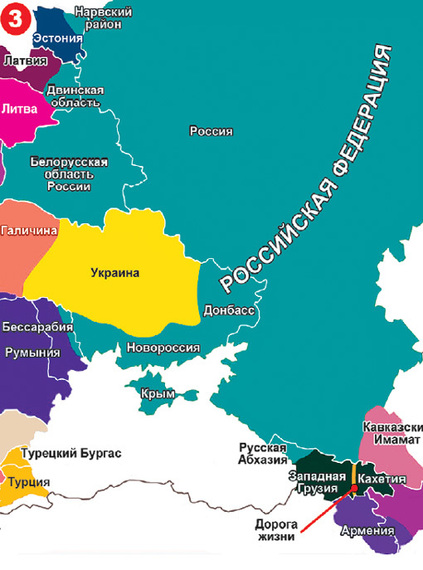 Secondly, those countries in the "Near Abroad," both former Soviet states and satellites who turned their backs on their historic Russian protectors and tried to cozy up to Western Europe and the US, from Poland to Romania to Bulgaria to Georgia, are punished by the loss of significant territory, while those countries that remained loyal to Mother Russia, like Serbia, see their territories expand.

Here again, the message is unmistakable, neither the EU nor NATO nor the United States will ultimately protect Eastern Europe from either German revanchism or Russian retribution. Better to accept your place in the Russian world order now or accept the inevitable consequences of defiance later.

There is no mention of what role the United States would play in Europe in 2035. With the principal multilateral organizations in tatters, how would the US project its power and influence on the continent? Would the US maintain a military presence there or would it have withdrawn altogether?

Perhaps this is the ultimate Putinesque fantasy, as it was for Stalin in 1946, that Washington would withdraw from the continent and that a fragmented, disintegrating, chaotic Europe would fall under Russian influence, if not direct control.

Is this a Kremlin fantasy? A Putinesque daydream? In light of the Brexit vote and the steady rise of Euro-skeptic parties on the continent, it is a fantasy that is at least based on powerful forces of nationalism and ethnicity that are real and substantial, and that are pushing Europe in the direction of fragmentation and chaos.

Budapest's announcement on July 5, that it had set October 2, 2016, for a referendum on whether it should accept Syrian refugees, further underscores that the fallout from Brexit will be far reaching and has only begun to be felt.

Even if they ultimately fall short of creating the Europe 2035 that Express Gazeta envisioned, these powerful ethnic and nationalist forces will work in the Kremlin's interest. Moscow can be expected to encourage them, both surreptitiously and diplomatically, in the years ahead.