The outrage over the replica gun on the back of a patriotic jeep is the left trying to attack guns and your #2A rights. I will not back down in the face of a snowflake meltdown and outrage culture. https://t.co/FONJBWZWMM #ksleg pic.twitter.com/TEtyFtQ7rT

A city in Kansas apologized after GOP governor candidate Kris Kobach rode in a vehicle outfitted with what looked like a machine gun during a weekend parade.

Kobach, the Kansas secretary of state, rode in Shawnee’s parade in a red, white and blue Jeep that had a replica of a loaded machine gun mounted on it. He proudly tweeted photos of his ride, saying, “The only thing that stops a bad guy with a gun is a good guy with a gun.”

But others criticized the display of firepower in a parade that children were watching.

“It was pretty shocking. There were audible gasps from the folks we were sitting by,” the Rev. Johnny Lewis, pastor of Shawnee Community Christian Church, told the Kansas City Star.

Lewis said on Facebook that his 6-year-old daughter found Kobach’s vehicle disturbing, especially when many children have fears of school shootings.

“Why was that necessary sir?” Lewis wrote. “My child didn’t need that today.”

Even some supporters of the Second Amendment were critical of Kobach, The Washington Post said.

“I’m a lifelong conservative and strong believer in the second amendment, and I found your float extremely tacky and inappropriate,” one person wrote on Facebook.

Kobach was invited to appear on “Fox and Friends” on Tuesday morning to discuss what he called the “snowflake meltdown” about his parade appearance.

Had a blast riding in the Old Shawnee Days Parade in this souped up jeep with a replica gun. Those who want to restrict the right to keep and bear arms are deeply misguided. The only thing that stops a bad guy with a gun is a good guy with a gun. #ksleg #ksgov #TeamKobach pic.twitter.com/ZULBEYTqUW 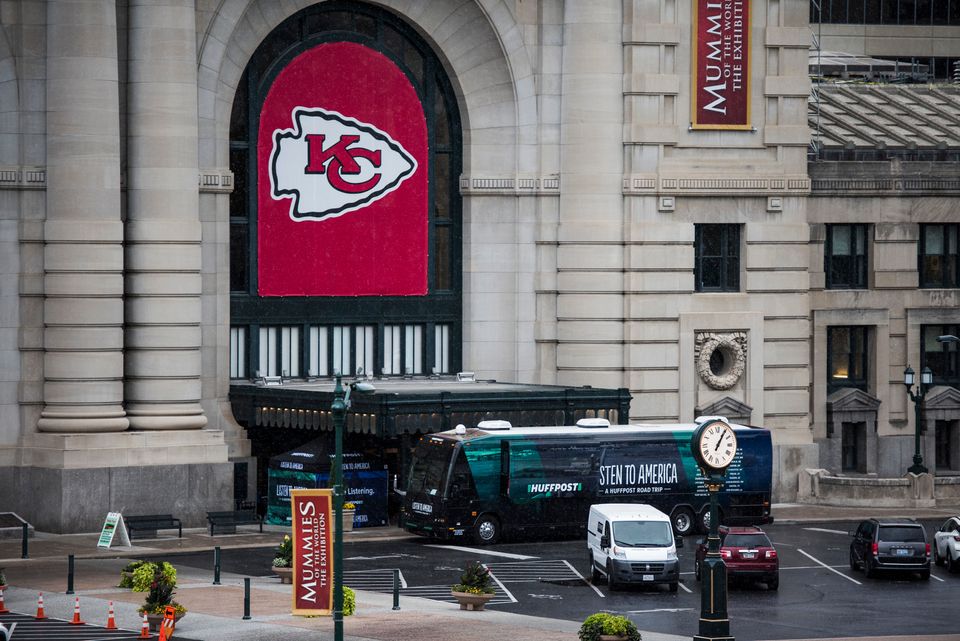 1 / 16
The HuffPost tour bus sits in the Union Station parking lot during HuffPost's visit to Kansas City, Missouri, on Oct. 10, 2017, as part of Listen To America: A HuffPost Road Trip. The outlet will visit more than 20 cities on its tour across the country.
Damon Dahlen/HuffPost