Proposition 8 plaintiffs Kris Perry and Sandy Stier experienced a huge victory earlier this week when the Supreme Court left California's gay marriage ban for dead. On Friday, the couple's triumph came full circle when they tied the knot in first same-sex marriage held in the state in four and a half years. The move was prompted when the 9th U.S. Circuit Court of Appeals issued a surprise order dissolving a stay it had imposed on gay marriages during the legal challenge.

(Watch video of their ceremony above.) 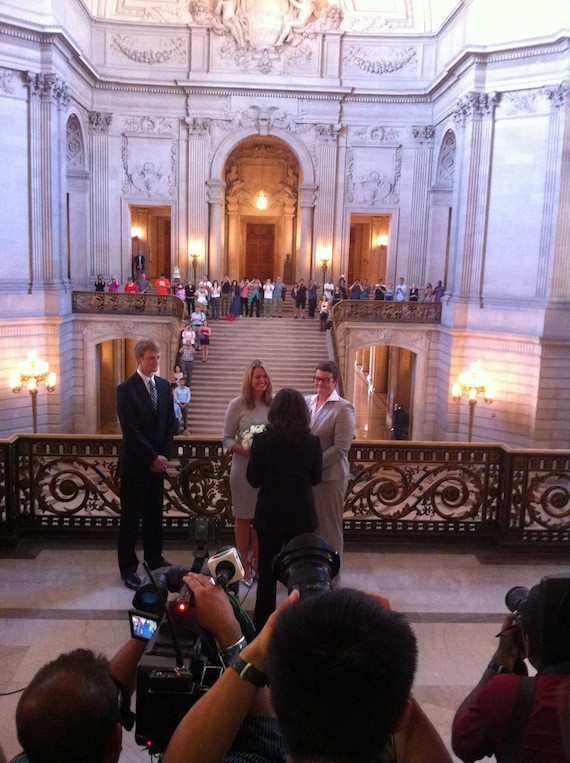 Perry and Stier celebrate after getting married: 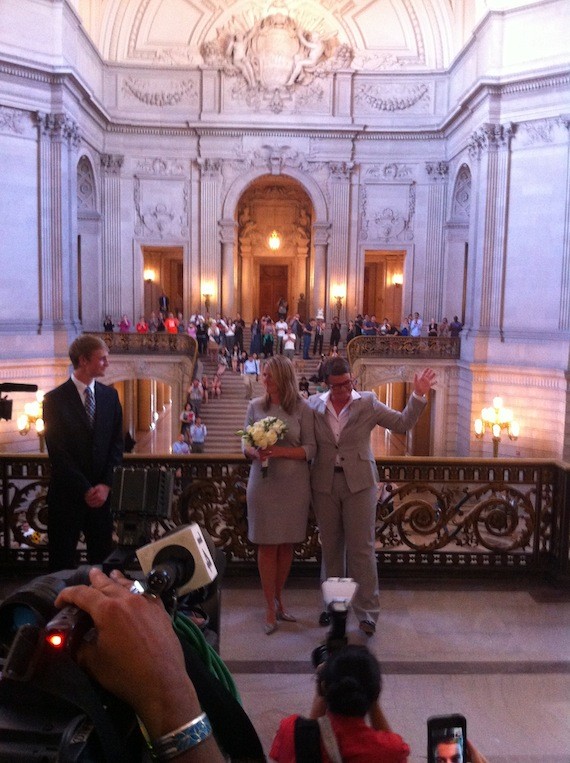 The lead plaintiffs in the U.S. Supreme Court case that overturned California's same-sex marriage ban tied the knot at San Francisco City Hall on Friday, about an hour after an appeals court cleared the way for same-sex couples to obtain marriage licenses for the first time in 4 1/2 years.

State Attorney General Kamala Harris presided at the wedding of Kris Perry and Sandy Stier, of Berkeley. The couple sued to overturn the state's voter-approved gay marriage ban along with Jeff Katami and Paul Zarrillo, of Burbank, who planned to marry Friday evening at Los Angeles City Hall.

"They have waited and fought for this moment," Harris said. "Today their wait is finally over."

Harris declared Perry, 48, and Stier, 50, "spouses for life," but during their vows, they took each other as "lawfully wedded wife."

The 9th U.S. Circuit Court of Appeals had issued a brief order Friday afternoon dissolving a stay it imposed on gay marriages while the lawsuit challenging Proposition 8 worked its way through the courts.

He called the court's decision an "abuse of power to manipulate the system and render the people voiceless."

The Supreme Court ruled 5-4 Wednesday that the sponsors of California's voter-approved gay marriage ban lacked authority to defend the measure in court once Harris and Gov. Jerry Brown refused to do so.

The decision lets stand a trial judge's declaration that the ban, approved by voters in November 2008, violates the civil rights of gay Californians and cannot be enforced.

Under Supreme Court rules, the losing side in a legal dispute has 25 days to ask the high court to rehear the case. The court said earlier this week that it would not finalize its ruling in the Proposition 8 dispute until after that time had elapsed.

It was not immediately clear whether the appeals court's action would be halted by the high court.