It was bound to happen. In their "Will They Build It?" series, TopCultured has done the only reasonable thing left to the KFC Double Down: Give it a bun. A bun that is a Krispy Kreme Doughnut. And extra "Colonel's Sauce."

The mad scientists behind this explain:

With all the KFC Double Down hype recently (from the Double Double Down to the Quad Down and more) we knew we had to one-up all the madness that is this meat monster of a sandwich. What to do? Well the choice is obvious. Take the infamous Double Down and the fabled Luther Burger and make the KFC & Krispy Kreme Fried Chicken Luther Double Down Sandwich.

A Luther Burger is any hamburger with a glazed donut standing in for a bun, currently popularized in the form of the infamous Krispy Kreme Bacon Cheesburger, and cash cow for the "This Is Why You're Fat" brand.

The KFC Krispy Kreme Double Down, a.k.a., the "Luther Double Down," coming in at 900 calories: 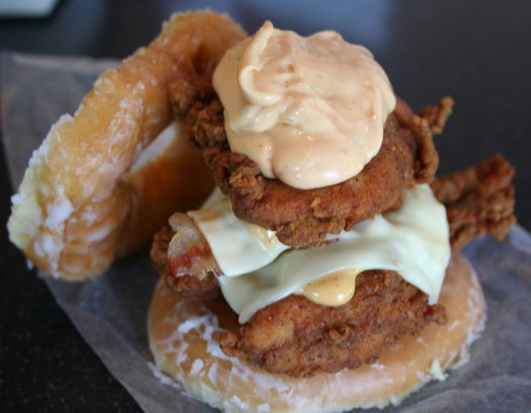 Via Adam Kuban at Serious Eats.