Nana is back in New Orleans after a week in London doing makeup for the Prometheus press tour. Fortunately, the other makeup artists on the film I'm shooting filled in for her so she could make sure the cast of Prometheus looked good for Access Hollywood. I'm only a little bitter, and that's only because I love having Nana around and I don't like to share her. But I understand that she is in a creative role and needs to consider her own career; I also understand that she has made sacrifices for me. Last year, she spent six months in Detroit doing my turn-of-the-century (20th century, that is) hairdo on Oz, instead of taking a job as head of the hair department on Snow White and the Huntsman. I don't want to talk about whether she made the right decision or not, but for the past year she has reminded me that she would have had a lot of fun creating all the hairstyles on Huntsman. Well, Huntsman is finally in theaters and, since we're currently shooting nights, we took the occasion of Nana's return to see a matinee showing; Iris, my Mexican producing associate, came along. There is a great theater called Canal Place on Canal and Decatur where they take your order at your seat and serve gourmet popcorn, salads, sandwiches and beer. Nana got the truffle-flavored popcorn and I got regular because the flavors usually get old after a few bites.

Snow White and the Huntsman looks great and the actors are fabulous. The film gives us everything that it should: beauty, danger, romance, action, fantasy and a rewarding ending. Of course, this movie isn't breaking new narrative ground -- who expected that? In fact, the script by Evan Daugherty -- a fellow NYU film school grad -- is more than loyal to the familiar set pieces of the original story: three drops of blood on the snow, fair skin, dark hair, a wicked witch, a magic mirror, dwarves and a poisoned apple. The main addition to the classic tale is forecasted in the title. The Huntsman, played by handsome Chris Hemsworth, steals the meat of the role traditionally played by the dwarves: bonding with Snow White out in the woods. His presence means the film has less time to explore the dynamics of the makeshift family with the dwarves, which would be forgivable if only his romantic connection with Snow White were given enough space to develop properly. Some critics might go after the actors for being flat -- Nana said it seemed like Hemsworth was playing Thor in different clothes, and Iris, who worked on the first two Twilight films, praised Stewart but was still reminded of Bella Swan. We discussed, and Iris and Nana came around. They blamed the actors less -- I mean, the actors are going to look like themselves from movie to movie; it's not like they're character actors -- and started to look at the material they'd been given to work with. If Stewart and Hemsworth don't entirely pull off the romance of the year, it's the fault not of their acting as much as the script's structure. And if their previous incarnations are trailing them, that has less to do with their performances than with the overwhelmingly large place their previous roles occupy in our present culture. Whether they heed it or not, those two are under a ton of pressure: Is Chris just an unusually rugged man with a deep voice, or can he play anything other than a Norse god? Is Kristen just a pouty Vampire lover riding a temporary wave of pop culture madness, or is she the real deal? I believe that they are both talented and special performers who make the most of their material in this film. What's interesting is the way its story parallels the plight of the actors themselves.

Fairy tales are tricky things. They usually traffic in simply drawn characters and storylines that depend more on symbolic action than subtle development. Fairy tales, like parables, are devices to teach lessons in broad strokes, not to study character in detail. That's one reason animation can often do better justice to fairy tales than live action films. For a while, live action was lagging in the fantasy department, because the technology couldn't render the special effects well enough, but Peter Jackson's Lord of the Rings changed all that. Now fantasy worlds can be realized in live-action films better than in animated ones. The difference now between Snow White and the Huntsman and Puss in Boots is that we allow an animated cat to cut corners in emotional development, whereas we expect Kristen Stewart's character to develop according to the rigors of reality. Puss can fall in love at the first sight of a female cat, but Kristen's Snow White needs to have reasons for falling for the Huntsman. In the Grimm Brothers' version of the Snow White story, the evil queen wants to be the fairest in the land simply because she is vain and proud, but this film provides further support for her murderous competition with all beauties in the land. Charlize Theron's Queen is a woman who has survived for generations in a ruthless patriarchy. Her beauty is what keeps her in power in a man's world. Unfortunately, the downside of her perpetual power and beauty forces her to turn on her fellow females rather than on restrictive men.

So, the conflict is ultimately between two females who represent innocent youth (Stewart) and aging beauty (Theron), each of whom is fighting to control the throne. Sadly, this can be seen as an analog to the dynamics faced by actresses (and, to an extent, actors) today. The old guard will always be wary of the new guard, but the fact is that women in entertainment still depend on their looks more than men do. Even two powerhouses like Theron and Stewart are beholden to the dictates of a man's world.

In a way, the film could also be said to parallel Stewart's rise to stardom. Snow White is imprisoned in a tower for about a decade -- let's say from age eight to 18. From the looks of the place, I doubt she received much in the way of nourishing food or toiletries, let alone an education, so it is a little strange to see spry, beautiful, intelligent Kristen Stewart emerge from the dungeon. Of course, this is a fairy tale and we can allow that the princess is beautiful. These are Medieval conditions, so even if she hadn't been in prison, she'd probably look like crap from the lack of modern tooth brushing apparatuses and moisturizers alone. So we can assume that this is our version of beauty, standing in for an older version. But the idea that she is the chosen one, fit to rule the kingdom without any preparation or training, is hard to accept. This unearned entitlement is the same issue that bedevils the Twilight stories: these kids don't have to work to become beautiful, immortal, intelligent vampires; they just need to get bitten. Some might argue that Stewart -- or any young upstart buoyed by the surge of a successful franchise, album, or Internet meme -- is just as unjustly charmed. Some could say she had a lucky break when she was cast in Twilight and then rose to international stardom based less on her own skills than on the success of the project. But, whereas Snow White would more than likely be inarticulate, diseased and frail after being confined in a tower for 10 years, Kristen Stewart landed Twilight after years of working with some of the best directors in the business (David Fincher, Sean Penn). She actually does deserve the crown.

To me, then, the images of Snow White as a leader of immense strength, charging on horseback across the beach at the head of an army, has less to do with her character and more to do with the actress who plays her. Stewart has braved more scrutiny of her private life than most presidents. She has taken big career risks by doing films like Welcome to the Rileys, The Runaways and On the Road (nudity, I hear). She has worked her ass off. Whatever Snow White may be, Kristen is a warrior queen. Give her the crown.

PHOTO GALLERY
Stills From &quot;Snow White and the Huntsman&quot;
Download
Calling all HuffPost superfans!
Sign up for membership to become a founding member and help shape HuffPost's next chapter
Join HuffPost

Kristen Stewart the Queen
Stills From &quot;Snow White and the Huntsman&quot; 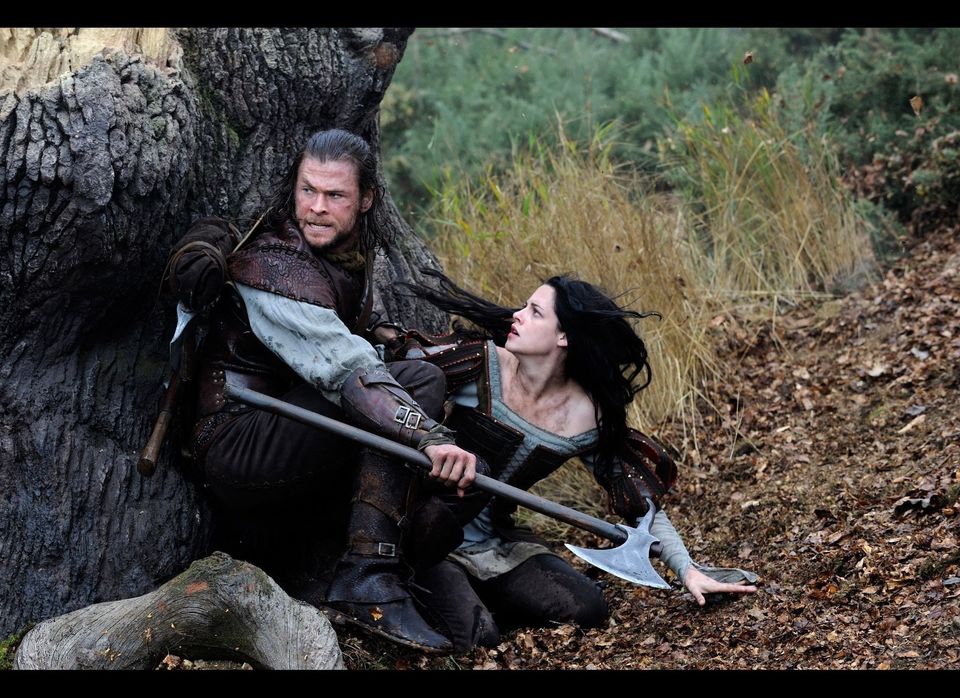