Wherever she is, Kristen Stewart perpetually appears as though it's the last place she wants to be.

The 22-year-old actress, who struggles to get through an interview without biting her lip and playing with her hair, graces the cover of Vanity Fair's July issue in which she defends her surly demeanor.

Stewart is aware that she isn't perceived as Hollywood's sweetheart, but she doesn't seem to understand it's not just about looking bored in photos, it's her general attitude that's off-putting.

"I'm proud of it. If I took perfect pictures all the time, the people standing in the room with me, or on the red carpet, would think, What an actress! What a faker! That thought embarrasses me so much that I look like shit in half my photos, and I don’t give a f**k," she explained to Vanity Fair.

Stewart isn't "Mary Sunshine" nor does she want to be, in her life or in her work. It's more than apparent that she believes sulking and having an air of indifference makes for a more realistic performance.

"Me and ["Twilight" co-star/boyfriend Robert Pattinson] got into a lot of trouble. We were getting these notes from the studio. They wanted me to smile all the time. They wanted Rob to be not so brooding. We were like, 'No! you need to brood your ass off,'" she told the magazine.

According to Vanity Fair, it's Stewart's reluctance to play the usual "movie-star game" that has earned her a reputation as one of the most polarizing actresses in Hollywood. To those looking in, she seems ungrateful for her success, and disinterested in her responsibilities as a genuine star with throngs of adoring fans, but her co-stars are more than happy to jump to her defense.

"Kristen doesn't know how to be in a popularity contest," said Sean Penn, who directed Stewart in the 2006 film "Into the Wild." "You can see Kristen generously trying to join the popularity contest when a movie is being publicized. She'll try to get on board, but her body language has a whole different dynamic."

Her boyfriend, Rob Pattinson, blames Stewart's rep on the media, telling Vanity Fair that people have already decided how they are going to perceive her. "No matter how many times she smiles, they'll put in the one picture where she's not smiling," he complained.

In the years before Stewart became a full-fledged celebrity because of her role in "Twilight," she was lauded as an impressive child actor, and often called the "next Jodie Foster." (Stewart appeared with Foster in the 2002 film "Panic Room"). But after she was romanced by sparkling vampires, that all changed.

"You can Google my name and one of the first things that comes up is an image of me sitting on my front porch smoking a pipe with my ex-boyfriend [Michael Angarano] and my dog. It was [taken] the day ["Twilight"] came out. I was no one. I was a kid. I had just turned 18," she explained. "In [the tabloids] the next day it was like I was a delinquent slimy idiot, whereas I'm kind of a weirdo, creative Valley Girl who smokes pot. Big deal. But that changed my daily life instantly. I didn't go out in my underwear anymore."

For much more with Kristen Stewart, pick up the July issue of Vanity Fair, available on newsstands June 7. 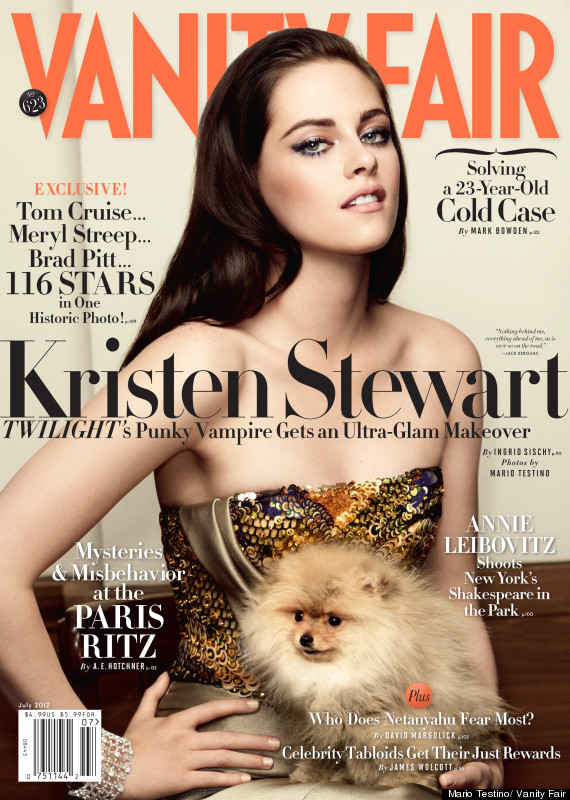 Kristen Stewart throughout the years: