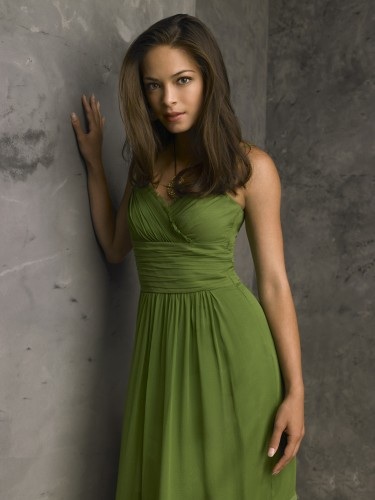 Kristin Kreuk has finished her run as Lana Lang on the CW's Smallville and is currently starring in the new film Street Fighter: The Legend of Chun-Li. Based on the wildly popular video game series, Street Fighter is the origin story of one Chun-Li, a young woman who, after losing everything, has to find her inner strength. Kreuk is not only playing a strong woman on screen. She's helping young girls to support each other and create in a world that doesn't always offer them support. "Girls by Design" will be an online social network and content creation site for teen girls, with the intent to build self-esteem, self-expression and encourage young women to improve themselves and their lives in an introspective and passionate manner." This site is in it's beta phase right now, but she tells us it should be launching sometime this May. We caught up with Kreuk and found out more about the project, how she and partner Kendra Voth came up with the idea and the girls retreat they're doing this month. They've even got uber chic beauty site b-glowing.com supporting the cause by sending fair trade, organic products for the event, like Adara oils. Girls can sign up right now at www.girlsbydesign.com.

Tell me about "Girls by Design".

The company is an online social network and content creation site for teen girls that will be focused on self-esteem building. It will be basically about utilizing technology to help build our human experience, as opposed to utilizing technology to kind of pretend that we're having a human experience by isolating ourselves. I don't want to give too much away, but the girls will be able to take some thing that we throw at them out into the world and share it with each other. And then they will be able to build from there. Hopefully in the future, we'll be able to offer scholarships and grants and such.

What was the impetus for this project?

Well, I think that being in this industry for as long as I have, especially during Smallville when I did teen magazines, I was noticing that, in my opinion, it seemed like there wasn't much out there that was inspiring young women to create and really explore themselves and what they want to do. There was a lot of stuff that really appealed to girls interests in beauty and makeup and fashion and boys. That was all there. But the other part of girls, I don't think was being appealed to. And it seems like they want that. At least in the experience that I've had with the young women I've interacted with. There's this passion that they have and there isn't an online or even a print outlet for them to utilize, apart from Girl Guides, and things like that. I want to do something that's a little more hip that they can go to.

What will the site look like when it launches? What sort of structure will it have?

Well, again, I don't want to give too much away, but the social network will compliment the content creating aspect of the site. Girls will have their own personal pages, but that's just to support the rest of the workings, so they can display their own stuff and have their friends there like any social network. And then the meat of the site will be more in the content creation end of it. And it will also have the "Girls by Design" content. I won't be specific about what that will be, but I can tell you it will be really amazing.

There have been studies about girls and boys that say that, in elementary school, both sexes raise their hands in class equally, but at some point that stops and girls start to shut off and participate less. What age is this site aimed at?

The age group will be older twelve-year-old, twelve to thirteen, to eighteen, nineteen-ish. It will probably bleed into the twenties for girls who are really passionate about it. We've already been experiencing that because you can build yourself into a mentor and then help other people. But I've noticed that around eleven or twelve, girls are still very focused on other people, saying, 'What's the girl beside me doing?' and 'Am I doing the same thing as her? And if not, maybe I should be.' That's very much the focus. They don't seem to think about well, who are you? They wouldn't be able to answer as clearly as a thirteen or fourteen-year-old. And then around that time, it seems through my experience, that they seem to become really excited about learning about themselves and who they are and who they're not. (laughs) When you're a teenager, you're really defiant. I think we all go through that. And they start to want to create based on that, and to express themselves. Expression is so important, and having unlimited self-expression is so important. So this would provide a forum for that.

Do you have a mentor who helped you out in this way?

Yeah, I've had a lot. Not in high school, I didn't. I think that my mentor was sports and acting, really, because they were outside...I think doing a sport or choosing an artistic passion at that age gives you a focus so that you're not as confused about who you are or how to be different. It seems like it allows you to really pursue something that you love. So I think that those were my mentors at the time. And as I've gotten older I've had many mentors in recent years that have helped me to develop this concept and also pursue it, because, just like anybody, I'll say, oh, I have an idea. Am I actually going to do something about it or not, because most of the time I'm like, 'Oh I had a really good idea...but I'm not going to pursue it.' But I'm going to pursue this and see what happens.

And you're doing this with a partner?

Yes. Kendra Voth is my partner. I brought her in because she's more detail oriented than I am, and she's more able to follow through with things.

And you're doing a retreat for girls?

So Tamara Lelie has an organization called "Time Out Retreat" (www.timeoutretreat.com) and she's done two retreats, one for women and one for the elderly that are really about building balance, using holistic methods, like meditation and yoga and nutrition. So I was talking to her and we thought we'd build one for teen girls and shift the focus a little bit. So we're having one March 7th and 8th in Temecula, CA at Warner Springs Ranch (www.warnersprings.com), who kindly donated their space, which is amazing. So we're going to go there and it will be rotation based, so the girls will get to go in groups of five and go through all of these different rotations and learn about themselves. And then we're going to show all of their projects. They all sent in projects that got them into the retreat. They're so cool! They're unreal. I've got some of them on my desktop right now. They're amazing.

When will the site be officially launched?

Well, it depends how the beta test goes. And once we start testing the beta, if there are a lot of bugs or not. So I'm thinking, and I don't have a hard date, I'm thinking it will be May-ish but I'm not sure. It depends on how the boys do with their building.

In the meantime, where can girls go to find out about this?

There's www.girlsbydesign.com. They have to register to get into the site. It's a bunch of newsletters and the girls that are running the newsletters are our board of directors and they've completely taken over the responsibility. And so it's run by teen girls. It's so great. I'm so excited about it. Every couple weeks they put out a newsletter and Kendra and I participate in it but it's really their thing. And they can also go to our blog, www.blog.girlsbydesign.com, and that has a bunch of fun stuff. That's mostly young women who are posting which is really great. So if people want to participate in any of the stuff that we do, they just have to email us and they can get their stuff up too.

How many girls have signed up so far?

In the thousands. I'm not sure what our exact numbers are at this point, but it's a mixed community now. We haven't filtered out all the Kristin fans yet. (laughs) Not that we don't want Kristin fans. We do. But there are some men still. So it's much more of a community still, but it's very much female-focused. But the guys...once the curiosity is satiated, most of them leave, but some of them stay and they're really a great part of the community.