Officials called it a mixup.

Kristine Diven and Micho Detronik had recently purchased a home in the Wayne County tax auction.

That is, until the state of Michigan razed the couple's home without their permission.

The two local artists run a Detroit gallery space called District VII. Officials say the house was demolished due to outdated lists and a lack of communication between the Michigan Land Bank and Wayne County

HuffPost Detroitt spoke to Kristine about what happened, how she plans to deal with it and her relationship to the city.

Tell me a little bit about your background as an artist in Detroit?
I am pro photographer and photography instructor. I moved to Detroit four years ago and then got a space in [the] Rivertown [district]. It's 3,600 square feet and three stories high. It's a large warehouse. We primarily use it for set design and storage of props. And we do gallery exhibits. And we do photography workshops as well.

What about Micho?
He's the first "VJ" (Video Jockey) in Detroit and he's known for a group called Inter Animi which was a rather ridiculous performance art troupe that did a lot of fire and explosives. It was banned from most venues. And then together we do a kind of art called new media art. We do something interactive called mannequin forest. We have these mannequins that we've turned into robots and they are motion-triggered and they move and they blink. We build up steampunk events and steampunk art and we also do projection mapping onto buildings and inanimate objects and we do some guerilla art. We do work together and he has a history of using old TVs from the ceiling and doing a lot of strange video work and mixing.

Tell me about the house you bought. What was it like before it was demolished?
The house was 2,700 square feet, if I recall correctly. It was a duplex, a two family home, and it was on Beaconsfield near the edge of Grosse Pointe. (SEE PHOTO BELOW) The neighborhood is called Morningside.. we won the winning bid for the house and a vacant lot next door that we planned to plant a community garden on.

What were your plans for it?
We were going to board it up for the winter ... and start working on it as soon as we could go into it in the spring. Later we would be able to move upstairs and have tenants on the lower floor, so that we could further offset the costs of renovation. It was $500 for the house and $500 for the lot.

Do you still own the lot?
That's not completely clear -- where Wayne County is. They haven't said yet exactly. We're going try and keep the lots as well, but we no longer have a use for either property now.

How did you find out about your house being demolished?
We looked for properties. We researched several days a week starting in the end of July through the third week of October and a lot of research went into which properties to bid on. We won three properties total. I was visiting friends at a place I volunteer called Arts and Scraps [on Dec. 6] and I was gloating about what an exciting deal we got and how excited we were to start renovating. And went to check on the house and take some more measurements. So that I knew what kind of supplies I needed to seal it up and found just a big mound of debris and rubble.

I had drove up because we were getting very antsy because our deed had not arrived. And we held our breaths during Devil's Night and hoped for the best and it made it through Devil's Night. There was no arson. So we were getting restless because we'd been instructed that we should not board it up until we received out deed. And I had texted my friend Jerry [Paffendorf] who runs Why Don't We Own This and Imagination Station and asked him if others had gotten their deeds yet and he said some had and some had not. And I was getting antsy and making the decision that I was going ahead and board it, even though you're not supposed to. Another woman on the east side had a squatter move in approximately the same day that she won her auction and was concerned that could happen as well or that arson could occur.

What have your communications with the Wayne County been like?
Our communications have been minimal with Wayne County. We've had more communications with Karla Henderson (Group Executive of Planning and Facilities for the City of Detroit); also Greg Holman (Special Projects Coordinator for the City of Detroit). They've been reaching out to other people and they've tracked down the Michigan Land Bank. And I spoke to Kim Homan, the director there. So that's where we've pursued it.

Are you taking any action?
We're not going to sue. It's pretty pointless. It would be a waste of a lot of people's time. It would be a waste of the legal system to try to sue over this. We're getting a little further with the media. Saying a little bit and pushing. I think we're at least making progress, that there's enough attention on this blunder, that they will work hard to make sure it doesn't happen again. Karla is working hard with us to find some properties that the city has access to and Kim Homan is working with a list that Michigan Land Bank has access to. And since they canceled our sale, I don't know if they're going to offer it to us for free or if they're going to offer us an equal property for sale. So that part I have been too confused to really understand -- what the offer will be. But they are working to offer us other properties we can look at and choose from.

I read something about you wanting to set up a website on the issue. What can you tell me about that?
I don't know if we'll plan a whole website, but certainly we'll have a few pages on our own sites and blogs to go over what's happened. I had a little bit of advice from people, but it wasn't enough to really feel safe with this process. We knew that it's confusing and can be risky if you're not used to Detroit and you're not used to buying properties. I hope to take the information that we've learned and struggled through that I hope to be able to post it and make it easy to find so that future people don't end up in the kind of situation like we had.

Have you heard of any other stories like yours since this has happened.
I did track down more houses that were bid on that I also found on the Michigan Land Bank demolish list and I drove up to Morningside and verified that the houses were, in fact, demolished. So no one that I know of has come forward in the media. I know that one of the bidders who bid the most at the Wayne County Auction, he just walked away from the properties. I don't know who else has been affected by it, but I have been reading online how other states handle these situations. It sounds like a very common problem in the world of surplus properties all around the U.S., that there's a lot of different entities involved and they don't always have up-to-date lists of properties. They don't always have standard procedures. ... I don't think this is only a Detroit problem. I read about a 16th century chateau that accidentally got knocked down in Europe. So this kind of stuff does happen.

I know you're concerned about this incident not being used to smear Detroit in the media -- and have pointed out that the mistake didn't involve anyone from city government. I was curious to know why you think Detroit is a good place to buy a property?

Well I moved here from New York and it doesn't feel right. It doesn't feel very kosher to me to move 700 miles to Detroit just to go invest in the burbs. I came here to be part of the changes going on in Detroit. And I'm a city person and I wanted to be involved in the changing and developing [of the city]. 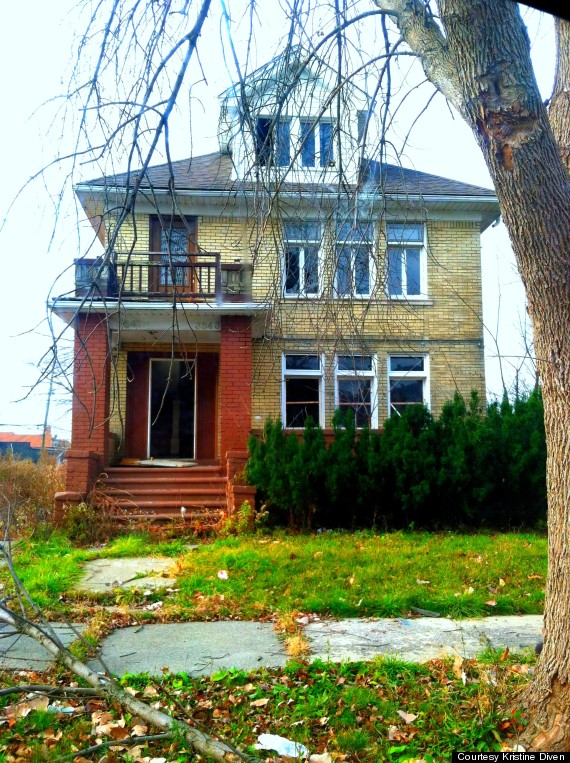 Kristine and Micho's house before demolition.