The cadre of mothers crusading to ban the open carry of firearms in stores has added a new poll to its arsenal.

Sixty-four percent of shoppers in states allowing gun owners to brandish their weapons in public want supermarket giant Kroger to prohibit open carry in its stores, according to the poll, commissioned by Moms Demand Action for Gun Sense In America, the increasingly powerful gun-control group backed by billionaire Michael Bloomberg.

On Wednesday, the moms plan to picket outside Kroger’s annual investor relations meeting in Cincinnati armed with a 300,000-signature petition and the poll, which was released Tuesday by the Benenson Strategy Group.

“People are now just realizing how absurd it is that someone could bring a loaded AR-15 into Kroger with them while they’re shopping,” Shannon Watts, the founder of Moms Demand Action, told The Huffington Post on Tuesday.

Moms Demand Action has already notched significant victories through powerful social media campaigns. At its urging, corporate food chains Chili’s, Sonic, Jack in the Box, Chipotle and Starbucks asked customers to leave guns at home or in the car. After a prolonged fight, during which the moms faced fierce rallies by rifle-toting open-carry advocates, the group convinced Target to announce a no-guns policy.

But the Kroger campaign marked a shift for the group toward more sophisticated tactics. Flush with cash from Bloomberg’s Everytown for Gun Safety fund, the moms rolled out campaign ads for the first time last month. Meant to jolt shoppers into realizing the absurdity of allowing assault-grade firearms in the stores, the ads juxtapose a person with an AR-15 slung around his shoulders with either a child holding an ice cream cone, a shirtless man or a teenager with a skateboard. The message: Deadly weapons are allowed at Kroger, where policy forbids these other, relatively harmless things. 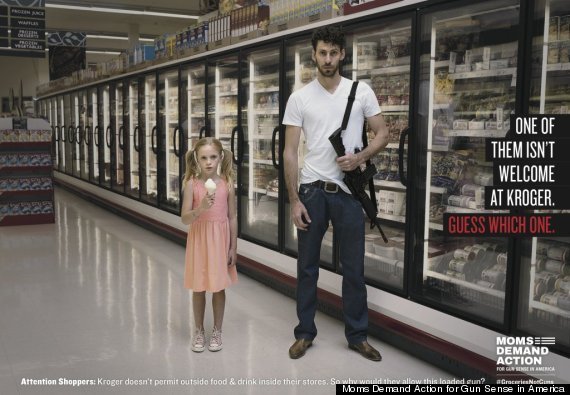 One of the ads released by Moms Demand Action to pressure Kroger to ban guns.

Since the moms embarked on the campaign, smaller grocers have approached the group for help drafting gun bans of their own.

Watts said her group chose the supermarket giant because of its size and visibility. Kroger operates 2,419 stores in 31 states, most of which are in the South and Midwest, regions where gun culture and the powerful National Rifle Association maintain a stronger grip than in, say, the liberal Northeast.

“We wanted to pick a campaign that would give us the opportunity, frankly, to do more brand damage by running ads,” Watts said. “They may at first sit back and allow the brand damage to occur, and then realize, ‘Oh, wait, we’re alienating most of our customer base, which is women and mothers.”

Kroger said it has no plans to change its current policy, and that it believes the Everytown is "a national political organization that is attempting to use retailers to further their agenda."

"Kroger's policy has been and continues to be to follow state and local laws and to ask customers to be respectful of others while shopping in our stores," Keith Dailey, a spokesman for the chain, wrote in an email to HuffPost. "We believe the controversial gun issue is best resolved by lawmakers, not retailers."

Though the results of the moms' new poll should be taken with a grain of salt, considering the group financed the poll, the findings indicate a desire to leave guns out of the grocery store. 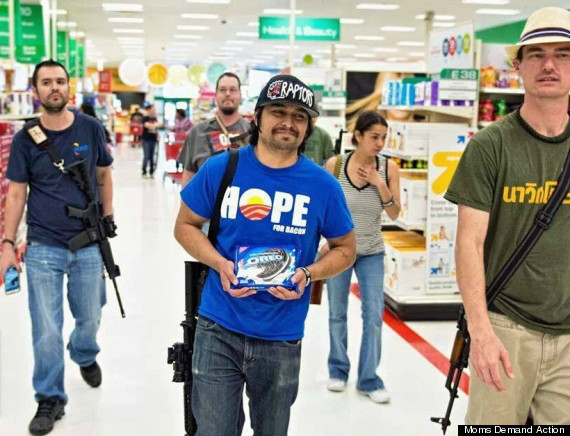 Open-carry activists marched through a Target location in Texas to protest the moms' early efforts pushing the retailer to ban guns.

Watts said most of the retailers that have announced no-guns rules over the last year conducted their own polls ahead of any policy changes.

But the rules aren’t always legally binding. It can be difficult for individual chains to enforce the policies, both legally and logistically, if a defiant customer decides to carry in a loaded assault rifle strapped to their back. But Watts, who has endured violent threats and brutal, misogynistic hate speech since founding the group after the massacre at Sandy Hook Elementary School, said the policies are first steps toward loosening the grip of the NRA gun culture.

“Ultimately,” she said, “businesses cannot withstand the wrath of American moms and women.”

This story has been updated with a statement from Kroger.