Causes of war, according to Krugman

In a recent column in the New York Times (aka the newspaper of record), Paul Krugman explained the causes of war. Since this is a rather important issue and of interest to readers of the real news, I want to convey Professor Krugman's insights to those that might have missed the article itself. Early in the article we are informed:

Once upon a time wars were fought for fun and profit; when Rome overran Asia Minor or Spain conquered Peru, it was all about the gold and silver. And that kind of thing still happens.

Krugman offers no evidence for the suggestion that wars are fought for the fun of it, and we can assume that this represents a rather lame attempt at humor in decidedly bad taste. He does provide support for the "profit" part, citing the work of a two neoclassical (and neoliberal) economists who on the basis of rather dodgy statistical exercises conclude that wars in the sub-Saharan region (and elsewhere by implication) result from profit-loss calculations by prospective insurgent leaders. 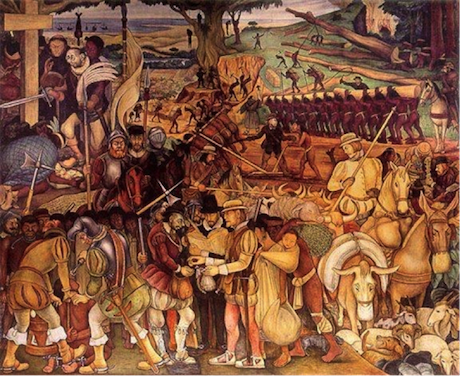 Anyone inclined to the "it's looting and plundering, stupid" explanation of wars in developing countries should go to a serious study of the subject by Chris Cramer, "Civil War is not a Stupid Thing" (reviewed here). Cramer demolishes the economic reductionist position with insight and a considerably better writing style than his protagonists.

In my new book I argue that we should view neoclassical economics as a virus of the intellect. Once the virus lodges itself in the mind of even an intelligent person, it relentlessly corrupts all thought. Krugman, who began his career in the neoclassical camp, serves as a case in point. Obviously enthralled by the reductionist explanation of why wars occur, he proceeds to pursue it to its reactionary conclusions.

Holding tight to the reductionist position, he writes, "Modern nations can't enrich themselves by waging war. Yet wars keep happening. Why?" Having set us up with this rhetorical question, he proceeds to answer it. First, wars may occur because governments get the cost-benefit calculation wrong. In case you think that no intelligent person could offer such nonsense as an explanation of catastrophic events, I must quote, "leaders may not understand the arithmetic" (in which case, one presumes, the solution to war is adult education classes).

Perhaps himself not completely convinced by the maths-challenged road to war, he offers a second possibility, "governments all too often gain politically from war, even if the war in question makes no sense in terms of national interests." As an example of governments gaining from war, he throws out the familiar nugget that government "desire to distract the public from an economic debacle." As a specific case, conflict in Ukraine resulted because "the Putin regime needed a distraction." [I suggest Krugman read my Open Democracy article on Ukraine.]

Now convinced by the idea of economic reductionism manifesting itself in governments starting wars to distract the public from bad economic conditions, Krugman goes slightly apocalyptic,

...[I]f authoritarian regimes without deep legitimacy are tempted to rattle sabers when they can no longer deliver good performance, think about the incentives China's rulers will face if and when that nation's economic miracle comes to an end -- something many economists believe will happen soon.

So, there we have it -- wars result from economic calculations by governments of profit and loss, but governments can 1) miscalculate the sums, and/or 2) override the rational cost-benefit accounting because of the need to distract their populations from bad economic times. It makes a nice, tidy little package.

Reality Check
And, it is complete reactionary nonsense. One assertion above all others in Krugman's article leaps off the page (or iPad screen) -- governments cause wars. It compliments Krugman to describe this position as superficial. It is nonsense. Has he never heard of "classes" and "class conflict"? [Probably not, having been trained as a neoclassical economist]. We are fortunate to have Cramer's book to purge the neoclassical virus, and he is crystal clear -- wars are inherent in capitalism and especially inherent in the tensions generated during the transformation of agrarian societies by the rise of capitalist markets.

In a recent article on anti-Jewish and anti-Muslim attacks in Europe I asserted that "the deregulation of markets liberates capital to impose its rule in brutal form," and I read Cramer as making a complementary argument. The brutal rule of capital provides the context for class and ethnicity driven conflict. The material gains from capitalist development can favor some groups over others, a phenomenon distressingly common throughout the developed and underdeveloped world.

Wait, you might say -- aren't classes and the mal-distribution of the gains from development economic in nature? So, while he misses the class point, isn't Krugman right, that all wars have an economic basis?

The answer is no, Krugman and other economic reductionists cannot escape the absurd superficiality of their arguments by merely broadening their definition of economic causes. Their analysis, if we call such nonsense "analysis," fails to recognize the historically specific nature of capitalism. The economic reductionist explanation of war qualifies for what Karl Marx called "vulgar economy":

[V]ulgar economy... deals with appearances only... and there seeks plausible explanations of the most obtrusive phenomena, for bourgeois daily use, but for the rest, confines itself to systematising in a pedantic way, and proclaiming for everlasting truths, the trite ideas held by the self-complacent bourgeoisie with regard to their own world, to them the best of all possible worlds. [Capital, Vol I, Chap 1]

The specific form of Krugman's trite ideas, peddled for "bourgeois daily use," is that governments cause wars, not the tensions generated by capitalism. Krugman explicitly argues that the development of economic links among countries is a deterrent to war, a long standing neoliberal position propounded Ludwig von Mises over eighty years ago. Krugman tells us that "in an interdependent world... war would necessarily inflict severe economic harm even on the victor." It follows that if governments had less power and "market forces" were free to rule, we would have no wars. "Free trade" is the solution to war. This ideology goes back to Adam Smith:

Commerce and manufacturers gradually introduced order and good government, and with them, the liberty and security of individuals, among the inhabitants of the country, who had before lived almost in a continual state of war with their superiors. This, though it has been least observed, is by far the most important of all their effects. [quotation from The Wealth of Nations]

This ideology of the "self-complacent bourgeoisie" persists despite repeated empirical refutation. The Krugman article demonstrates that even the best of neoclassical economists are captured by the ideology that markets generate outcomes beneficial to all participants, which those participants disrupt at great cost to themselves.

This benign view of markets is dangerous nonsense. It denies the role of markets in fostering, intensifying and fueling conflict, a role I deconstruct in a subsequent article. No, Professor Krugman, winner of the so-called Nobel Prize (awarded by the Bank of Sweden)*, governments do not cause wars. Powerful interests in society and long-standing tensions among social groups cause wars. Governments are the agency implementing war, not the cause.