Six years ago, I filmed a gang of sadhus (spiritual ascetics) smoking weed on the banks of the Holy Ganga in Northern India. Their guru stepped away from a young European woman meditating under a banyan tree, and approached me, machete in hand. "You want to know about gurus?" He popped a squat, and lit up a bidi. "All those big gurus you see, they are not spiritual people. All they want is money. It's not that easy man... Living a spiritual life is very difficult." That night, they swapped the pot for heroin.

Back home in New York City, I filmed the world around me embracing the "spiritual life," or at least one packaged into a healthful 90-minute alternative to aerobics class. The modern definition of yoga is convoluted as the postures yogis aspire to. Symbols, smells, words, icons, and religions of the East became an easy aesthetic for branding and marketing. Was the culture I grew up in becoming just a marketing scheme for a flourishing industry? In yoga class, was I the only one who wasn't feeling the vibe of getting enlightened? And why were people all of a sudden bowing down to people in robes with expensive philosophies and the promises of happiness? I became skeptical of anyone who sold a spiritual product, anyone who claimed to be holier than anyone else, anyone who said they had the answer.

Since those days as one-man crew, my answers and strong opinions have turned more into questions. As a documentarian on the edge of a subculture for years, the lives of the characters I met have come full circle -- almost repeating the same plot lines as the teachers that fell decades before them. I've tried Iyengar, Ashtanga, Jivamukti, Kundalini, Anusara, and met the founders, inventors, entrepreneurs, and gurus in many traditions. I've also chanted (reluctantly and enthusiastically), set intentions, retained breath, hugged a saint -- or rather got hugged by one, received blessings, blessed, fasted, veg'd out, finished a first series, kriya-ed, flossed my nose, taken pilgrimages, avoided dysentery, bathed in the royal baths, found moments of deep tranquility, gave in to temptation, restrained it, fluctuated mentally, and even saw a most surreal event called an International Yoga Competition. I've said 'No, it's Vikram with a V' more than any other phrase these past few years. I learned from this, that practice never makes anyone perfect. We are all the same -- flawed, yet capable of greatness.

I'd always wanted to make a movie about 'us' -- about our inner, "spiritual" lives. I've watched so many movies about 'them' -- the backwards people of the others and even, the fundamentalist right-wingers. What about us? Why don't we turn our gaze back on ourselves? I figured: If you can't beat 'em, join 'em. So, I impersonated a wise guru from the East named Kumaré and started a following of real people in the West.

The character Kumaré was the center of a social experiment testing what we coined "The Spiritual Placebo Effect." Can a fake religion and religious leader have the same effect as a real one? If the facts are not real, does it make the experience any less real? Some people were appalled, offended at the idea. It's easy not to question what feels right -- people think you're being a downer, a bummer, or a cynic. But to me, asking questions, breaking down icons and idols, and destroying the illusions our society is built on are highly 'spiritual' acts. And aren't the saviors of history the ones that decided to speak up and say something?

This film was my humble attempt to bring the spiritual heroes I learned about as a child to the real world. I studied Buddha, Shiva, Krishna, Jesus -- all the big ones but it took the form a bearded barefoot man who carried a trident and spoke like my grandmother.

It was not a matter of fooling people -- everyone from the footsteps of the Himalayas to the Mexican Border believed in Kumaré. I suspect this is not because I am a great actor, but because Kumaré is a dream worth believing in. Being a fictional spiritual leader has a lot more rules than being a real a guru. No money can be earned. No temptation can be acted upon. My character only saw the highest in people, his 'motivation' was to make them happy -- to trick people to be happy.

At Q&A's, people ask me if I'm still as critical of spiritual leaders as I was when I started. I can say now that I understand why we have spiritual leaders, and how slippery the slope is from hero to villain, when one takes on that role. I may be more sympathetic now, but I still always think back to something Kumaré once said: "It is you real gurus that make us fake gurus so necessary."

Below are some scenes from 'Kumaré':

'Kumaré' is now playing in New York at the IFC Center. Visit the film's official site for additional upcoming dates and locations. 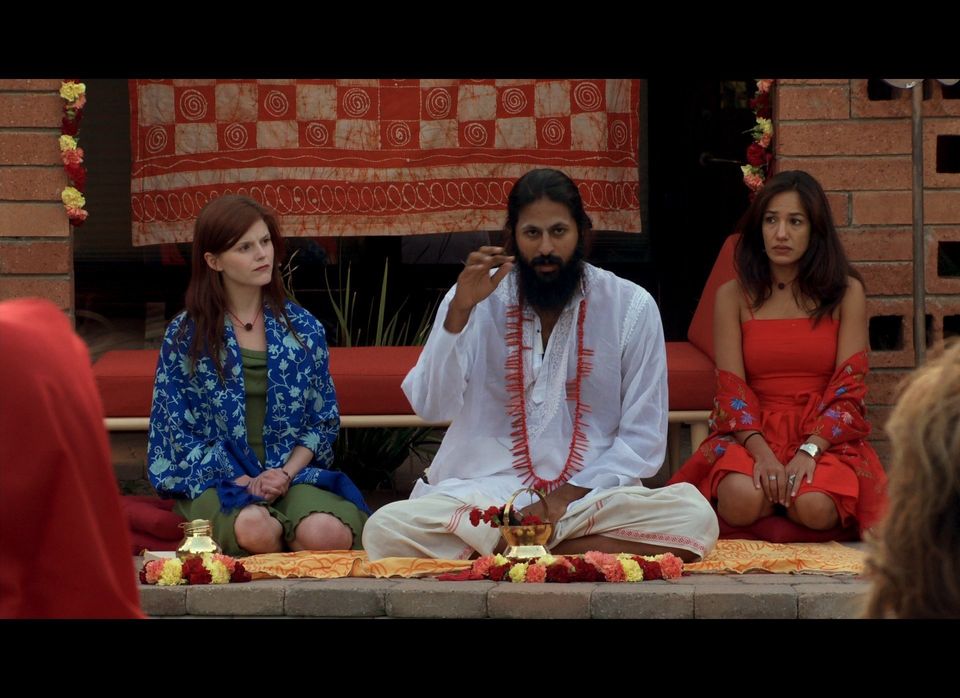