PRAYAGRAJ, India, Jan 15 (Reuters) - Millions of pilgrims began bathing on the first official day of India’s Kumbh Mela on Tuesday, the world’s largest religious festival where politics play an important role ahead of a general election this year.

During the eight-week festival at Prayagraj in the northern state of Uttar Pradesh, up to 150 million people, including a million foreign visitors, are expected to bathe at the confluence of the Ganges, the Yamuna, and a mythical third river, the Saraswati.

Devout Hindus believe bathing in the waters of the Ganges absolves people of sins and at the time of the Kumbh Mela, or the “festival of the pot,” it brings salvation from the cycle of life and death.

A highlight is the appearance of the Naga sadhus, or ascetics, who worship Shiva and bathe on the first day of the festival.

Many sadhus belong to monastic orders called Akharas and some live in remote caves, stepping out only for the Kumbh Mela, generally held once every three years in four cities across India.

Shortly before dawn on Tuesday, the first naked, ash-smeared ascetics, the Panchayati, plunged into the water amid cries of “har har Mahadev,” or “everyone is Mahadev,” another name for Shiva.

“It is out of this world,” said Varun K Seth, a saffron-clad sadhu. “When you get in the water, you feel like you are alive.”

Members of the largest monastic order at the festival, the Juna Akhara, raced down to the water carrying tridents and spears as police held back throngs of spectators.

“The river gives us immortality,” said a naked sadhu from the Juna Akhara as he reapplied a coating of ash on his body after bathing.

POLITICAL FLAVOR
While the festival is best known for the reclusive sadhus, the image of Prime Minister Narendra Modi was ever-present. Giant cardboard cutouts of Modi, the Hindu-nationalist leader of the ruling Bharatiya Janata Party who faces a tough test in a general election due by May, adorned the sacred site.

The BJP lost power in three states in assembly elections in December, and will want to avoid a similar result during the general election in Uttar Pradesh, a state of 220 million people where a strong showing can often decide the outcome.

“Modi is a good man,” said festival goer Seth, who gestured at a figurine of the prime minister. “He is watching over us.”

Modi’s chief minister in Uttar Pradesh, Yogi Adityanath, a firebrand Hindu priest pictured on billboards across the city, has championed policies that play to the party’s core Hindu base and alarmed Muslims.

This year he transformed a smaller Ardh, or “half” Kumbh Mela, into a full version of the festival. He also replaced the Muslim names of several cities with Hindu names - including Prayagraj, which was Allahabad until October.

“Yogi is a great leader who cares for the people,” said Kuldeep Banderi, a pilgrim from Delhi. “If this Kumbh is Ardh think what the next will be like.”

For the first time at the Kumbh Mela, a transgender ashram known as the Kinnar Akhara and led by rights activist Lakshmi Narayan Tripathi from Mumbai, joined the first bathing day.

India legalized gay sex in September, but the LGBT community still faces prejudice in the deeply religious country. Members of the Kinnar Akhara received a police escort to the bathing site, where Tripathi plunged into the waters fully clothed to the cheers of her followers.

The festival has its roots in a Hindu tradition that says the god Vishnu wrested a golden pot containing the nectar of immortality from demons.

In a 12-day fight for possession, four drops fell to earth, in the cities of Prayagraj, Haridwar, Ujjain and Nasik, which now share the Kumbhs. 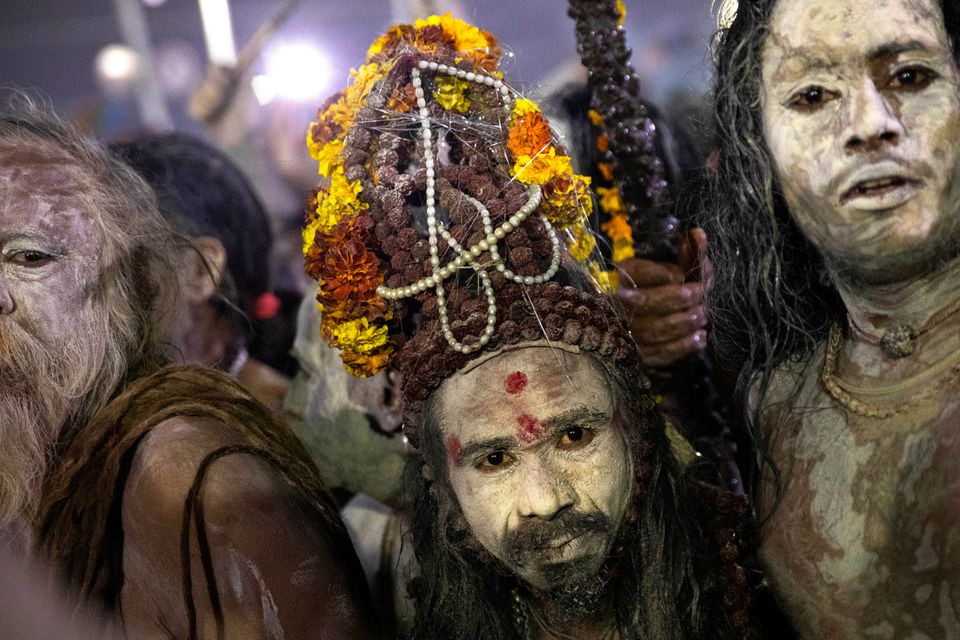