We Tibetans have many terms of respect for His Holiness the Dalai Lama; Yeshe Norbu, Gongsachog, Chenrezig, Gyalwa Rinpoche, Kundun... These are the names we use when we speak amongst ourselves and these were also the names I heard invoked many times when travelling around Tibet on my trips there in 1994, 2004, 2007 and 2008.

Upon hearing that I was a Tibetan from inji-lungba (literally, the land of English people), the first question would invariably be, have you ever seen or met His Holiness? From Lithang in Kham to Labrang in Amdo through to Lhasa in central Tibet, in all three traditional provinces of Tibet, it was the same question over and over. 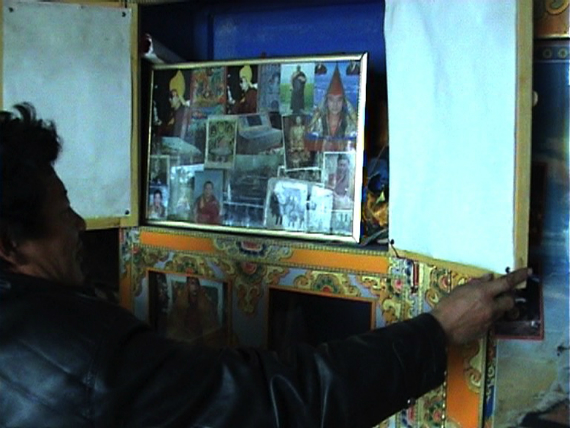 A nomad reveals hidden portraits of the Dalai Lama in the documentary film "Leaving Fear Behind". The filmmaker Dhondup Wangchen received a 6 year prison sentence for making this film.
(Photo: Filming for Tibet, 2008)

I almost felt bad to say that I had, on several occasions. I would never dare to answer truthfully, that I had seen him more times than I could even count. When I was little and growing up in Surrey, just outside of London, a Tibetan audience with His Holiness meant a day off school and a day trip to London, it was always exciting! In those days in the 1980s, there were barely 100 Tibetans in the whole of the UK.

Later when I became a student in Beijing in 2006, I taught English as a volunteer to Tibetan students and had been warned not to make the classes "political" in any way. Imagine how I broke into a sweat when in my first ever class, a young man from Amdo decided to use the self-introduction round as a chance to speak in English about the situation in his home village, describing in detail how Chinese settlers were coming in in large numbers and the lack of religious freedom. One of my other classes was on the topic of "holidays". When I asked the class, where they'd like to travel to on holiday, one by one they all answered India. I should have seen that one coming really. 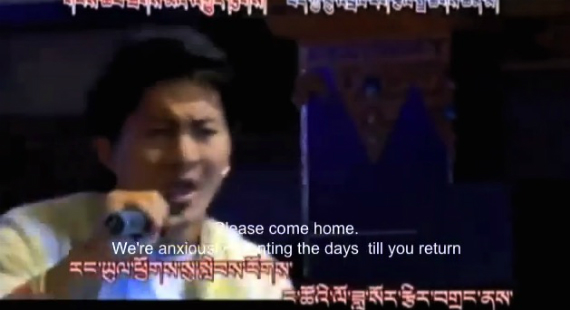 The term Kundun in Tibetan literally means "presence" but the Dalai Lama's absence from Tibet is an all too real pain that is impossible not to feel. Or in a strange way, it could be interpreted as an overall presence in noting the absence.

In contemporary Tibetan songs and writings, themes of missing someone, often a parent, are common, as well as longing for a distant far off place. These poetic expressions are often ambiguous to avoid censorship and political problems, many have been translated into English on my website High Peaks Pure Earth.

In 2011, prominent Tibetan writer, poet and blogger Tsering Woeser wrote about having a Skype audience with His Holiness from her Beijing apartment. Her blogpost became the most read on High Peaks Pure Earth ever and and the third most commented upon. 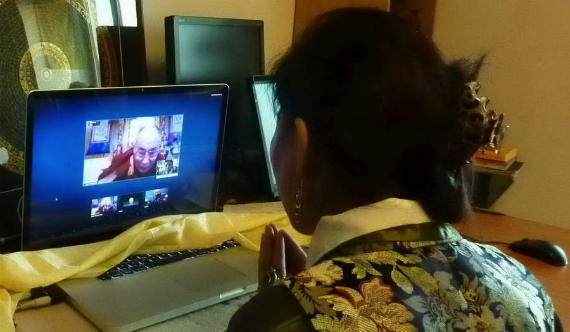 "I cried and I cried. When I, as Tibetans do, prostrated three times, silently reciting some prayers, holding a khata in my hands and kneeling in front of the computer with tear-dimmed eyes, I saw His Holiness reaching out both of his hands as if he was going to take the Khata, as if he was going to give me his blessings. I am unable to describe with words how I felt: I am really such a fortunate person; in Tibet, many people get into trouble simply for owning a photo of the Dalai Lama."

It seems fitting on the occasion of His Holiness the Dalai Lama's 80th birthday to honour the Tibetans who patiently wait for him.