GENEVA (Reuters) - A dozen kung fu nuns from an Asian Buddhist order displayed their martial arts prowess to bemused scientists at CERN this week as their spiritual leader explained how their energy was like that of the cosmos.

The nuns, all from the Himalayan region, struck poses of hand-chops, high-kicks and punches on Thursday while touring the research centre where physicists at the frontiers of science are probing the origins of the universe.

"Men and women carry different energy," said His Holiness Gyalwang Drukpa, a monk who ranks only slightly below the Dalai Lama in the global Buddhist hierarchy. "Both male and female energies are needed to better the world."

This, he said, was a scientific principle "as fundamental as the relationship between the sun and the moon" and its importance was similar to that of the particle collisions in CERN's vast "Big Bang" machine, the Large Hadron Collider (LHC).

But the 49-year-old Gyalwang Drukpa, head since the age of four of one of the new independent schools of Tibetan Buddhism centered in India and Nepal, stressed that their visit to CERN was not just scientific in purpose.

By taking the nuns around the world and letting people of other countries enjoy their martial displays, he told physicists and reporters: "I hope to raise awareness about gender equality and the need for the empowerment of women."

The nuns themselves -- who star on Youtube videos -- have benefited from this outlook, he said.

For centuries in Tibet -- incorporated into communist China since 1951 -- and its surrounds, women were strictly barred from practicing any form of martial art.

In his homeland Himalayan region of Ladakh, the Gyalwang Drukpa said, women were mainly servants, cooks and cleaners to monks.

About three years ago he decided to break out of this pattern and improve the health and spiritual well-being of women by training them in kung fu and even allowing them to perform sacred rites once also restricted to men.

"And a very good thing too," declared CERN physicist Pauline Gagnon, who recently wrote a blog study pointing to the low, although growing, proportion of women in scientific research around the world.

The visit to CERN, whose director general Rolf Heuer recently sponsored a conference of scientists, theologians and philosophers to discuss the tense relationship between science and religion, was not the first by a top religious leader.

In 1983 the sprawling campus on the border of France and Switzerland hosted the Dalai Lama, Buddhism's most revered figure, who argues that most scientific discoveries prove the truth of the view of the cosmos expounded by his faith -- sometimes dubbed by outsiders an "atheistic religion."

Pope John-Paul II preceded him in 1982 and the present Pope Benedict has a standing invitation from Heuer. 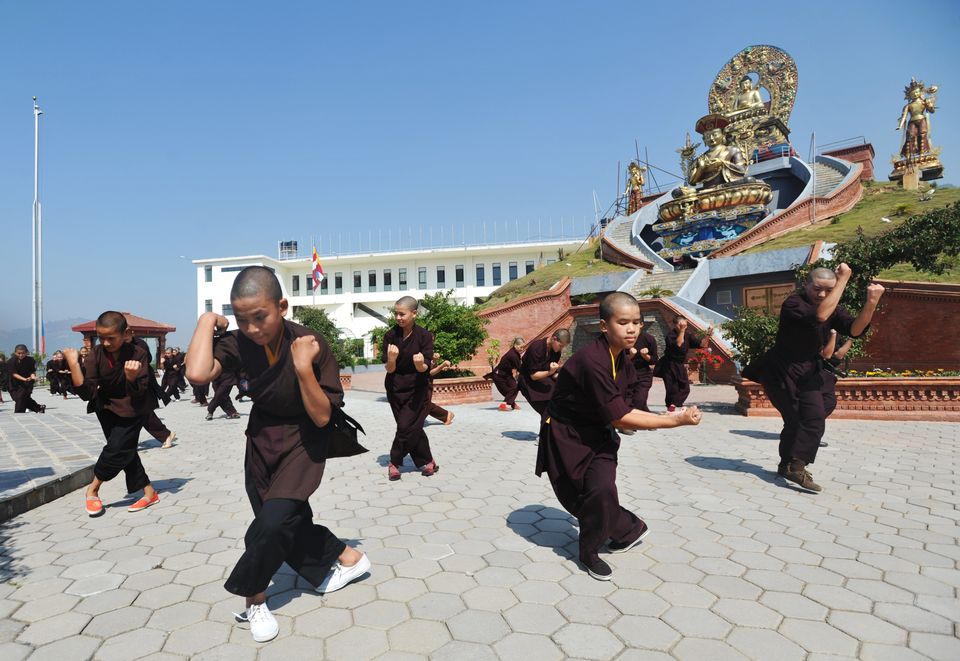 1 / 16
Buddhist Nuns Practice Kung-Fu
Buddhist nuns practise Kung-fu at the Amitabha Drukpa Nunnery on the outskirts of Kathmandu on April 26, 2012. Buddhist nuns in the Himalayas have traditionally been seen as inferior to monks, with the women kept away from such manly pursuits as martial arts and relegated to menial tasks like cooking and cleaning for the monks. AFP PHOTO / PRAKASH MATHEMA (Photo credit should read PRAKASH MATHEMA/AFP/GettyImages)
Getty Images