House Resolution 5747, a bipartisan bill giving President Obama the temporary authority to directly arm the Kurdish Peshmerga in their fight against ISIL, is circulating in Congressional offices, gaining more and more support amongst members of the U.S. Congress. Recent visits to Erbil by U.S. Senator Bob Corker (R-TN), the chairman of the Foreign Relations Senate Committee, and Senators John McCain (R-AZ) and Jack Reed (D-RI), chair and ranking member of the Armed Service Committee, will surely help this process on the Hill.

Quite rightly so, since the Kurds and the Kurdistan Regional Government have been a strong U.S. ally and friend since long before ISIL emerged. The Kurdish Peshmerga is a primary force in fighting ISIL and holds a thousand-mile border with the terrorist group. Their need for more advanced weaponry and heavy artillery is dire. Fighting such a brutal enemy that continually shocks the entire world with its despicable killings and beheadings, an enemy that disregards any rules of military engagement, with outdated AK47 rifles is unacceptable. Not that military aid is not reaching the Kurdistan region, but problems in coordination are still present. There are still some political forces in the federal government in Baghdad trying to hamper the notable progress made in December, when negotiations between the Baghdad government and the Kurdistan Regional Government in Erbil over the 2015 budget and oil export issues were successful.

As an example of these pockets of political obstructionism in Baghdad, recently the United States sent 220 armored vehicles to Iraq, out of which only 13 reached Kurdistan's Peshmerga units on the front lines. That is why the U.S. Congress's initiative to allow the U.S. to directly arm the Peshmerga is vital. Such an act will also help political processes in Iraq, sending a clear and strong message to all political groups that genuine inclusion, compromise and effective implementation of agreed steps in creating a just future for every ethnic group in this war-torn country must be honored. At present, civil servants working in the Kurdistan Regional Government have not received their salaries for several months. Payments to the Peshmerga forces are late too. International companies that were engaged in a number of capital projects in the Kurdistan region could not receive payments for their work, nor could they pay their various subcontractors. Some corrupted powerful political factions in Baghdad are simply preventing the flow of money to Kurdistan, trying to arrest their evident progress. But by suppressing cash flow to Erbil, Baghdad is also trying to turn away international investors, companies and service providers that are operating well in Kurdistan. Haider al-Abadi, the new Iraqi prime minister, and his cabinet will have to be very effective in stopping this malicious practice.

New Refugee Crises in Kurdistan on the Horizon

With preparations well on their way for the operation to liberate Mosul, Iraq's second-largest city of two million, a new refugee crisis is on the horizon. So far, Kurdistan is host to two million refugees, both internally displaced persons from inside the country and also from Syria. The entire Christian and Yezidi refugee communities have found a safe haven in Kurdistan. It is clear that the battle for Mosul will produce yet another wave of refugees that will no doubt come to the Kurdistan region. A number of international NGOs are present in Kurdistan and are working hard to help absorb the growing needs of the population there. 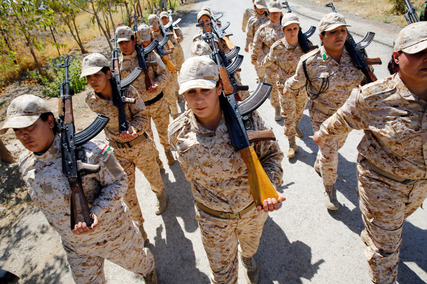 Barzani Charity Foundation to Open Branch in the United States

The Barzani Charity Foundation was founded in 2005 and operates without governmental or political party financial support, financed entirely through private donations. The Foundation's role model, inspiring the involvement of a number of local community volunteers to contribute to the effort, is the legacy of Mullah Mustafa Barzani, a most prominent political figure in modern Kurdish politics and a leader of the Kurdish liberation movement. It will open an office in Washington D.C. seeking more support for the refugees.

Mullah Mustafa Barzani was born in 1903 and passed away in 1979. He was the father of the current president of Kurdistan, Massoud Barzani. The foundation that bears Mullah Barzani's name provides food and shelter for refugees both domestic and international (about 95 percent of Syrian refugees in Kurdistan -- roughly 220,000 people -- have been placed in the Dohuk governorate in Kurdistan). It has six communal food kitchens preparing daily meals for over 150,000 refugees from the Shangal area. The foundation also provides scholarships in support of youth education and also has an Orphan Sponsorship Program for children who have lost their parents.

The Syrian Kurdish city of Kobane, bordering Turkey, stands now as an inspirational symbol of resistance to ISIL. After months of fighting, the city was liberated on January 26 this year. Kurdish women formed Peshmerga military units and fought shoulder to shoulder with Kurdish men, and emotional pictures of women with bombs, rifles and anti-tank launchers confronting ISIL flooded the world.

The Barzani Charity Foundation is making plans to help rebuild Kobane and restore life in that devastated city. Kobane should remind us all of the danger that ISIL poses to the entire civilized world. We owe it to the people of that city, and the courageous efforts of the Kurdish Peshmerga who freed it, to ensure that they are receiving as much support as we can offer.