WASHINGTON -- In an important development for the fight against the Islamic State group, the Kurdish forces in Iraq and Syria are drawing closer together, according to the top U.S. representative of the Iraqi Kurds.

"We're ready to defend Kurds wherever they are, and our relationship with the PYD is better than it was," Bayan Sami Abdul Rahman told The Huffington Post. The PYD is the most powerful political party in Syria's quasi-autonomous Kurdish regions. It is closely linked to the militia that successfully pushed the Islamic State group, also known as ISIS, out of the Syrian town of Kobani earlier this year.

"Kobani had a lot to do with that, and we hope that the ... relationship will continue to improve," Rahman added, after calling the hard-won victory an important symbolic triumph. "There might be some political differences between this political party and that political party. But we are connected by blood, and at the end of the day, that trumps everything." Rahman is a representative, not a formal ambassador, since the Kurdistan region is a part of Iraq and not an independent state. She took up her post in January, after serving as Iraqi Kurdistan's representative to the United Kingdom.

Though both groups are coordinating with the U.S. and other countries against the Islamic State group, the Syrian PYD has previously had a tense relationship with the Iraqi KDP, the chief player in Iraqi Kurdish politics.

The Syrian Kurdish party is significantly more left-leaning in its politics than the more conservative KDP. An additional source of tension, Kurdish observers have told HuffPost, is that the PYD sees the Iraqi Kurds as too close to Turkey. Turkey opposes Syrian Kurdish power because of the PYD's links to a Kurdish militant group within Turkey, the PKK. Syrian Kurds believe Iraq's Kurds and Turkey oppose their dreams of autonomy in order to maintain a status quo that is comfortable for them.

The Iraqi KDP, meanwhile, has loudly criticized the PYD for what it sees as the party's domination of the Syrian Kurdish political scene -- which has caused local allies of the Iraqi Kurds to be sidelined -- and its past cooperation in some areas with the brutal regime of Syrian President Bashar Assad.

But the threat from the Islamic State has forced changes in political calculations across the region, and analysts have suggested since last fall that the Iraqi Kurds became more skeptical of Turkey after it failed to combat the Islamic State's advances both in Iraq and against Kobani. In October, the Iraqi Kurdish region sent forces through Turkey to bolster the defenses in Kobani. 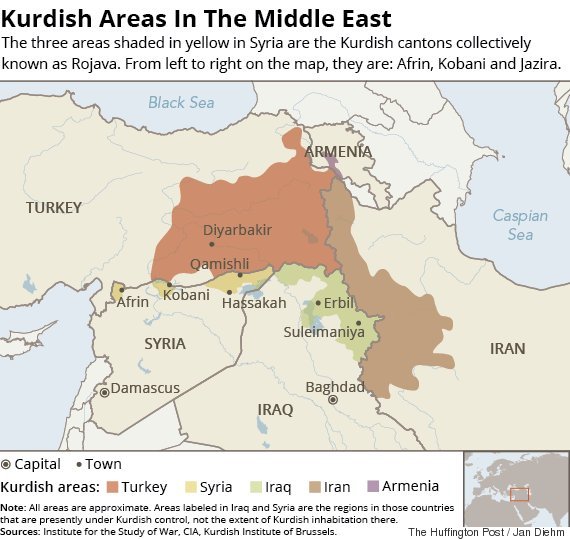 "We're very proud of the peshmerga's role in Kobani," Rahman told HuffPost, using a traditional name for the Iraqi Kurdish fighters. "Of course, a small number were sent there. But they played a critical role, with the support of the airstrikes" by the U.S. and its Arab partners in the coalition against the Islamic State.

Syrian Kurds also appear more open now to cooperating with the Iraqi Kurdish region. Sinam Mohamad, the Syrian Kurds' representative to Europe and a member of the region's High Council, told The Huffington Post in a March interview that she believed ties between the two Kurdish groups were improving. She noted, however, that the Iraqi Kurds' strong ties to Turkey, which the PYD sees as tacitly enabling ISIS, remained a source of concern.

The Syrian Kurds have been expanding their gains against the Islamic State group in the months since they regained Kobani, using U.S. air support to liberate territory in northern Syria. They recently pushed the extremists out of a number of villages populated by Assyrian Christians.

Rahman, the Iraqi Kurdish representative, made the comments to the The Huffington Post in her first major interview since she took up her role as the Kurdistan region's U.S. representative.