Yayoi Kusama's work is obsessive. Polka dots spread like infections across walls, canvases, objects. Boats are filled with thousands of stuffed phalluses, clothing items are covered in macaroni, and rooms with mirrors for walls are illuminated by millions of colorful neon balls. 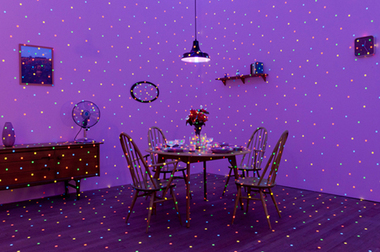 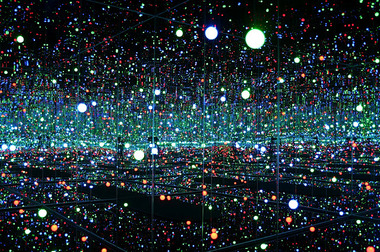 Yayoi Kusama, Room 14 at the Tate Modern- "Infinity Mirrored Room - Filled with the Brilliance of Life," 2012.

Joseph Cornell's meticulous glass-covered boxes are small contained poems of found objects where a ping pong ball becomes the moon, or a tiny doll is suspended over a landscape of newspaper clippings and little stamps. He often used star maps, small machine parts, and text from old newspapers to create his collages. Presented in a subdued manner, they were never brash or oppressive but dreamy and delicate. 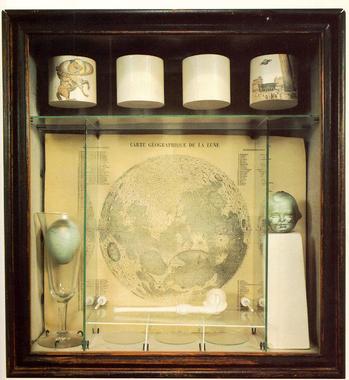 It is difficult to make connections between the universes of these two artists but their bond was, in fact, a romantic friendship between two quiet neurotics. 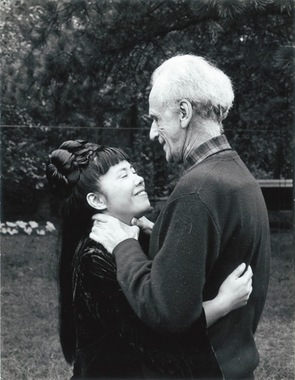 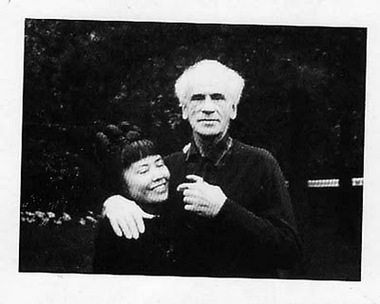 Kusama first met Cornell in the mid-60s, during what was the height of her reign as priestess of free love in New York. By that period, she had already found herself involved in an artistic community including Georgia O'Keefe, Donald Judd, Andy Warhol, Claes Oldenburg, and Eva Hesse. She was at the peak of her artistic career, renowned as painter, pop artist, cultural activist, showing expertise in various mediums including sculpture, painting, collage, film, performance, happenings, fashion design, and publishing. Having gained recognition for her sexually charged public performances in Central Park protesting the Vietnam War, her large-scale infinity net paintings, psychedelic mirror room installations, and the 'Narcissus Garden' which was shown at the 1966 Venice Biennale, Kusama demonstrated fierce competition in the male-dominated New York art world. 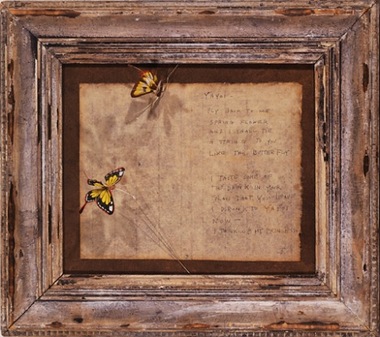 Despite an age gap of 26 years, Cornell developed a deep fondness and affection for the Japanese artist, flooding her mailbox with letters, personalized collages, and calling her on the phone constantly. They remained close for the remainder of Cornell's life, never having slept together but often spending time at Cornell's mother's home in Queens where he lived, passing the day sketching each other in the nude. Kusama later describes her relationship with Cornell as "romantic and passionate, but platonic." 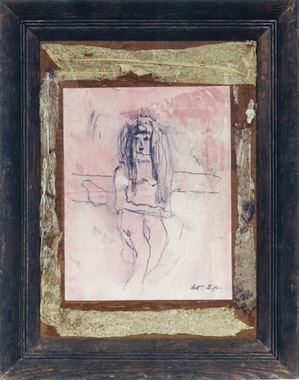 Upon his death in 1972, Kusama's health slowly declined, eventually leading her to seek asylum in a mental institution in Tokyo where she lives and works to this day. 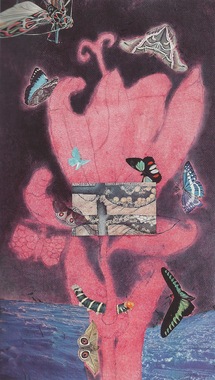 In wandering through Yayoi Kusama's retrospective at the Tate Modern, I walk into a section of works by Kusama from the mid-1970s, shortly after the death of American artist Joseph Cornell. Highly affected by his passing, she started a series of works featuring elements of his style including surrealist cutouts, collages, layered with her signature pattern of polka dots and infinity nets. These works revert back to her interest in her early active years of organism-like tentacles, spermatazoids, cilia, and microscopic shapes. The works are darker in color with an eerie, melancholic tone but calm in feeling. Cornell's influence on Kusama's works was apparent and illustrate a relationship in which two isolated visionaries found solace in each other's equally mad worlds.