Though many Americans don't know much about Kwanzaa, it's a beautiful holiday that all can share in. Akiba Solomon of Colorlines.com, federal civil rights attorney Charles Coleman Jr., and Donna Washington, author of "Li'l Rabbit's Kwanzaa," joined HuffPost Live to explain more about this important celebration of African heritage and unity.

Dates
Kwanzaa is celebrated from December 26 through January 1st.

History
Established by Maulana Karenga in 1966, Kwanzaa is a holiday that honors African heritage and celebrates family, community, and culture. It takes its name from the phrase "matunda ya kwanza," which in Swahili means "first fruits."
Kwanzaa's origin lies in the 1960s civil rights and Black Freedom movements, and is a way of commemorating the African heritage of black Americans whose ethnic history was stripped away by the slave trade. Swahili is the most widely spoken African language, and was thus chosen as the language of Kwanzaa's principles.

According to Karenga, "Kwanzaa was created to reaffirm and restore our rootedness in African culture." It is a cultural rather than religious holiday, and can be celebrated regardless of a person's faith tradition.

"First fruits" celebrations date back to ancient Egypt and Nubia, and commemorate the harvest.

Colors
The colors black, red, and green are part of Kwanzaa celebrations due to their special significance. Black represents the people, red is for the blood uniting all those with African ancestry, as well as the blood shed during slavery and the civil rights movement, and green is for the lush land of Africa. These colors also reflect the Pan-African movement itself.

Principles
There are seven principles of Kwanzaa, celebrated on each day of the holiday and known collectively as
Nguzo Saba.
They are African values which are named in both Swahili and English.

Traditions
Families gather during Kwanzaa to light the kinara, a candle holder with seven candles in the colors of red, black, and green. The black candle is placed in the center and used to light the other flames from left to right. Together, the candles are called the mishuuma saba, and they represent the Seven Principles.

Other traditions include the kikombe cha umoja, or Unity Cup, which is used to pour libations in honor of ancestors departed.

Songs and dances are a popular way of celebrating Kwanzaa. "Lift Every Voice And Sing," also known as the Black National Anthem, is a song that celebrates the struggles and triumphs of black Americans.

Greetings
Kwanzaa greetings are in Swahili and English. "Habari gani?" is a traditional Swahili greeting, and the response is each of the principles, depending on which day of Kwanzaa it is. Other greetings include "Heri za Kwanzaa," or simply, "Happy Kwanzaa!"

Kwanzaa 2013: Dates, Facts, And History Of The Celebration Of Unity, Faith, And African Roots
Kwanzaa Celebrations 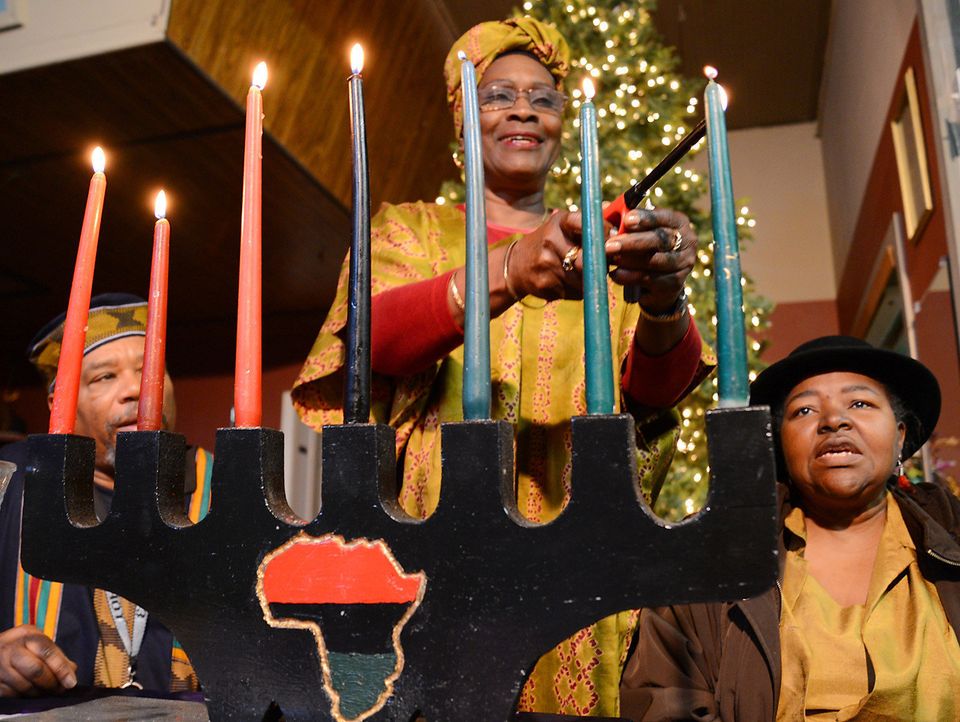 1 / 18
Happy Kwanzaa!
ADDS LAST SENTENCE - Travel Laguda, center, lights Kwanzaa candles on Friday, Dec. 28, 2012, at True Worship Outreach in Kinston, N.C., while Johnny Noel, left, and Kay Stewart-Moye, right, recite the seven principles of Kwanzaa. Each of the seven days of Kwanzaa are dedicated to one of the principals represented by the candles. It's a week-long celebration of African-American history and culture through the seven principles: unity, self determination, collective work and responsibility, cooperative economics, purpose, creativity, and faith.( AP Photo/Free Press, Zach Frailey)
AP