Imagine this. Your friend introduces you to her 3-year-old boy whom you immediately adore. You hold his shoulders with your arms outstretched as you talk to him and he responds by looking at you while he leans against his mom. As you tell your friend how lovely her child is, you switch to pinching the child's cheeks and patting his head. He responds by looking away. As your visit ends, you move in to kiss him on the cheek. He looks at you with an expression of horror and, before you can kiss him, he starts to cry.

While you may have missed the earlier signs that indicated he wasn't enjoying the interaction, most people would recognize that his tense posture and look of shock was your cue to stop even before he started to cry.

Humans Tend to Ignore Canine Signs of Anxiety and Discomfort

On the other hand, when an avid dog lover greets a dog in this equally improper way, the bite that ensues is often perplexing to the victim as well as onlookers. One such incident involving KUSA Denver television anchor Kyle Dyer occurred just this week. The news piece featured a Dogo Argentino who had been rescued the day before by firefighters when he fell into an icy lake. The spot was to honor and celebrate the rescue.

The reporter, who loves dogs, smothered the dog with affection by petting with both hands all over the face. The dog was virtually cornered -- sitting with his back against the couch with the owner's legs on both sides of him while the owner held his collar tight. The reporter was encroaching into the dog's personal space and, because of his positioning, the dog did not have the ability to show that he enjoyed the petting by leaning into the petting hand and couldn't show that he disliked the petting either by moving away. But he did lick his lips, which often indicates anxiety and he clearly turned away while the petting continued.

Next, the anchor moved her face in closer as if going in for a kiss -- the dog raised his lips and froze for an instant. When the reporter failed to recognize the neon signs and continued moving closer, the dog snapped, making contact with her face. It was over in an instant because the snap was meant to warn, not to hurt. The owner reflexively pulled the dog away and the dog willingly complied. No hard feelings on the part of the dog and no long, drawn out, frenzied barking and lunging. But the damage had already been done. He had landed a bite which, because the TV anchor was moving closer to him, led to a laceration requiring 70 stitches.

Most likely everyone involved feels badly about this incident, and they are not alone. The mistakes that the reporter made occur every day. In fact, this type of greeting is probably one of the top reasons why about 4.5 million people are bitten by dogs every year.

Recognizing Body Language and Greeting Correctly are the Keys to Prevention

We'd all do better if every one just knew a few things about dog body language and proper greetings. For instance, it's important to know that yawning, licking their lips, and panting as well as looking away can be signs of anxiety or fear.

To see more signs read my Art & Science of Animal Behavior Blog. You can also download a free poster on the body language of fear in dogs.

It's also useful to realize that while many dogs will put up with impolite greeting by unfamiliar people, some dogs are too scared to handle these human mistakes. Luckily, the mistakes are common sense when you stop and think about how you would want to be greeted (see the other free downloads on how to greet a dog).

For instance, you wouldn't want some stranger on the street rushing up to hug you. The same goes for dogs. That's why it's best to approach slowly (at a relaxed walk).

You'd also feel uncomfortable if a stranger approached and stared at you. It's the same with dogs. Avoid staring at and approaching dogs head on. It's best to approach sideways and view the dog out of your peripheral vision.

Similarly, you might be creeped out by someone hovering over you. Leaning over dogs can scare them too. It's important to stay outside the dog's bubble or personal space.

Even with people you know, it's still rude to reach into their personal space. Reaching out to a dog can be a threat. That's why it's best to let the dog approach at his own rate. It's best if the dog looks relaxed, comes up to you, and rubs against you to solicit your attention.

Lastly, even with your good friends, some friendly gestures are unwanted. The same goes for dogs. Many dogs dislike being hugged or kissed. As a result, it's best to watch the dog's body language and avoid actions that make him uncomfortable. 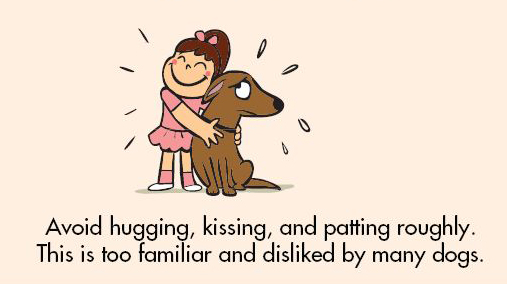 As you can see, the drama created in situations like the KUSA one described above can generally be avoided if humans follow a few simple rules. Just learn to recognize a few body language signs that tell you when a dog is scared or wants you to back off, and remember to greet dogs the way you'd want strangers to greet you.

For more information on how to properly greet a dog, read Preventing Dog Bites by Learning to Greet Appropriately.