Welp, I done been had. Master prankster @randyliedtke got me. Got questions? Ask him. Sorry. I wanted it to be real too.

@rossluippold Pace Foods does not have a twitter handle and the account was not authorized. We wish Miles luck though!

PREVIOUSLY: Forget about Elan Gale's livetweet of his altercation with an annoying plane passenger. Comedian Kyle Kinane may have beat him with this Sunday afternoon Twitter conversation with Pace Picante. (Note: This Pace Twitter account is currently unverified by Twitter. @Pace_Foods also blocked the editor filing this.)

It all started when stand-up comedian Kyle Kinane, who counts the likes of Patton Oswalt and Marc Maron as fans, noticed that the Twitter account for Pace favorited a 10-month old tweet insulting their salsa.

You're doing it wrong, Pace. pic.twitter.com/Va2FsobaiR

So he decided to have some fun with it.

I wouldn't rub Pace Picante-brand salsa on my asshole if my turds came out on fire.

Lo and behold, it worked.

He decided to test it again...

...and got the same result.

But how far would they go in favoriting negative tweets?

.@Pace_Foods only eats Tostitos salsa at the company Xmas party.

So it's just open season then? pic.twitter.com/sMUxooFr1J

Until they finally caught on.

We were just experiencing some technical problems with our Twitter account, please accept our apology and Happy Holidays.

I was never part of the 99% movement, but this morning we shut down big salsa! Cheers! pic.twitter.com/3s9RaizGVW

My friends are getting book deals from Twitter and I'm slow dancing with a robot for a case of free salsa. Everything's just fucking grand.

But it turns out they wouldn't bite.

The united front at Pace began to shatter.

Looks like we really "stirred up" a little controversy! (I love wordplay you can go fuck you if you don't). pic.twitter.com/YDk9FGPqeI

By this point, the interaction was getting increasingly public, so Kinane brought his childhood crush Winnie Cooper into it.


I'm only fighting with @Pace_Foods in order to gain the attention of @danicamckellar. It's like a real mellow John Hinckley situation.

Kyle decided that no harm had been done, so why not get some free salsa out of it?


Verdict in the @kylekinane bored in bed on a Sunday vs. @Pace_Foods's autonomously favoriting robot: pic.twitter.com/2U1xDQBj9h

Some "pranksters" also dropped this off.


You may've won earlier than you thought, @Pace_Foods. Pranksters just gave you $45. pic.twitter.com/gvtiXklTug

All was fun and games... and then it started to get real.


Well well, @Pace_Foods, is the player becoming the played? I say GAME ON. pic.twitter.com/jzc9xBO1OE


ITS A COVER UP!!! pic.twitter.com/cemzvJWIaC

My nerves are such a mess over the whereabouts of Miles and Eric now I can barely keep down my @Pace_Foods medium spice chunky style salsa.

Now it's just getting sadistic. WHAT DO YOU WANT FROM ME, PACE? AN APOLOGY? OH GOD IM SORRY. PACE FORGIVE ME pic.twitter.com/vdkttwHkA5

Oh god Miles I am so sorry. And right before Christmas. You can probably use salsa instead of cranberry sauce I guess pic.twitter.com/vp7rKA18ox

Kyle started to worry that he was responsible for someone getting fired.


.@Pace_Foods please donate one of my cases of free salsa to the home address of former employee Miles (assuming he can still keep his home).

Let's make sure Miles has a job tomorrow w/ @Pace_Foods. How about literally the easiest show of support--a hashtag? #BringBackMiles

We won't know about #BringBackMiles until tmrw when @Pace_Foods corporate hq opens up in Texas. Until then, lets hold a vigil (drink beers).

And Miles went rogue. (This tweet was deleted, but the text is below.)

THEY CHANGED THE PASSWORD, BUT BACK TO WHAT IT USED TO BE, I WON'T GO QUIETLY. #BringBackMiles #directdeposit #IQUIT


Kyle started to suspect that something was up.


The @Pace_Foods debacle has more layers than Syriana right now. @MilesWates may've been a fake acct from INSIDE THE COMPANY. #BringBackMiles 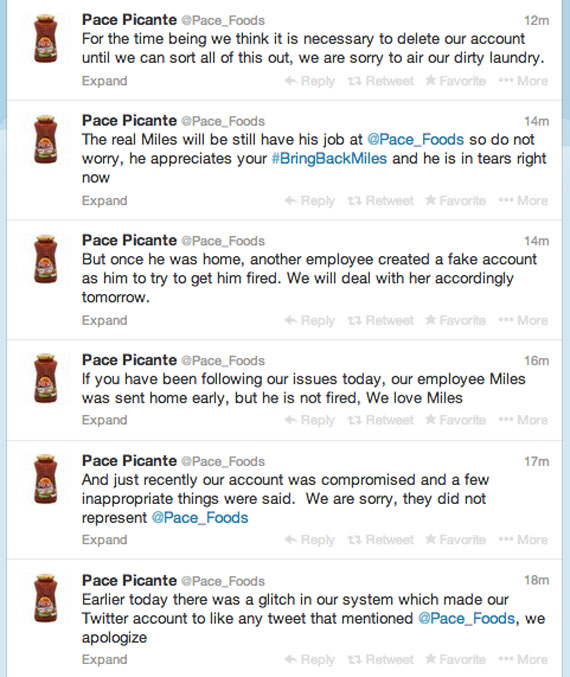 So what did we learn today? Even if you're a salsa company, keep an eye on your social media. GET A ROPE.