Residents of Kentucky may hate Obamacare, but they're much less hostile toward Kynect, the state's health exchange created to comply with the law.

Neither program was especially popular: Just 33 percent felt favorably toward Obamacare and just 29 percent toward Kynect. But a 56 percent majority disliked Obamacare, while just 22 percent felt negatively toward Kynect. Most Kentucky residents were undecided about the state exchange, with 50 percent saying they'd never heard of Kynect or weren't sure how they felt. Less than 12 percent were unsure about or unfamiliar with Obamacare.

Kynect's largely successful rollout hasn't generated goodwill for Obamacare, but the new survey numbers suggest the state exchange has avoided being mired in partisanship to the same degree.

The biggest difference in views of the two programs comes among Republicans. The percentage of GOP respondents who were unfavorable toward Obamacare was 51 percentage points higher than the percentage who felt that way about Kynect. That margin was 42 points for independents and 18 points for Democrats. 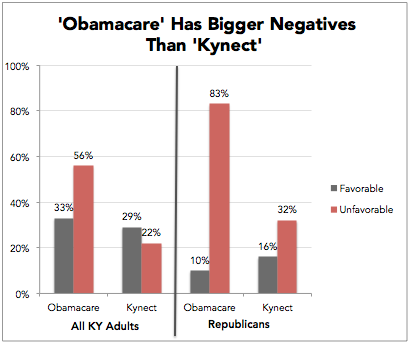 Taking Obama out of the equation also seems to give the health care law a small boost nationally. In Gallup's national polling, approval for the "Affordable Care Act" was 7 points higher than approval for "Obamacare." A separate CNBC survey found that Obamacare received both more support and more opposition than the ACA, which garnered more undecided responses.

NBC/Marist's Kentucky poll surveyed 2,772 adults in Kentucky from April 30 to May 6, using live interviewers to reach both landlines and cell phones.