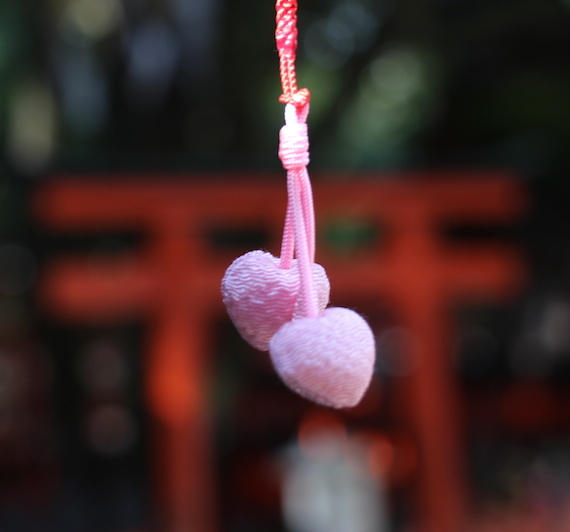 Packing your heart along with your passport for that trip to Japan? Has Kyoto got a shrine for you!

History and beauty are not the only reasons Japanese choose which of the hundreds of temples and shrines to put on their Kyoto to-do lists. For centuries (and longer) certain shrines have made a reputation for themselves as especially lucky in love. 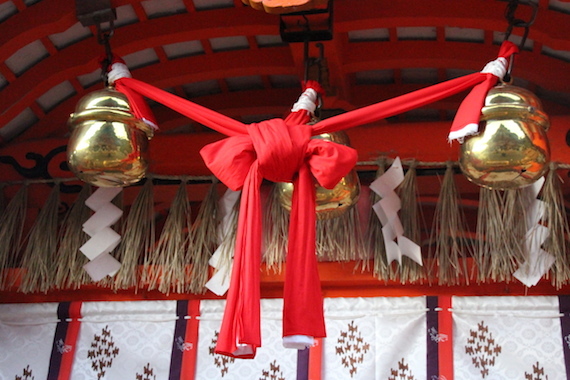 For the record, I'm not saying a quick stop at these shrines will actually lead to true love. Visiting holy places to ask for luck in love, health, or work is an ancient Japanese folk ritual and an important part of any visit to a temple or shrine. For visitors, it's a great way to participate in the local culture and bring back some good stories. 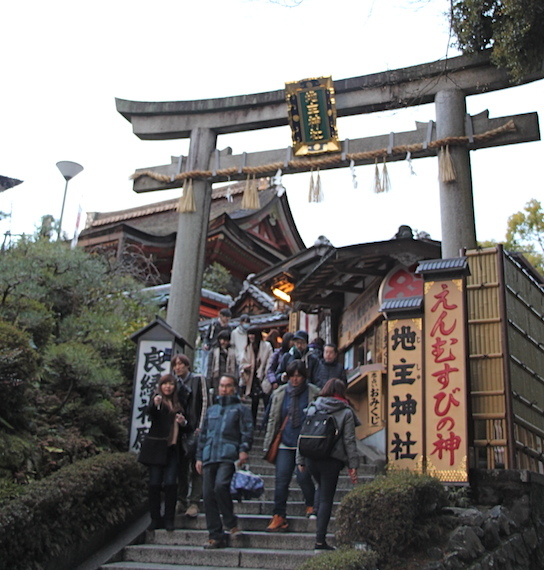 The entrance to Jishu Jinja is up this set of stone stairs. The sign on the right says 'enmusubi kami' -- shrine for the love bond god. Photo by Gail Nakada.

Jishu Jinja Shrine
Situated right on the grounds of must-see Kiyomizu Temple, Jishu Jinja is easy to include in your itinerary. It's a happy place where the Miko, holy maidens, always add "Oshiawase ni," -- may you find happiness -- with every charm or votive object they sell.

There are lots of things to see, touch, and do, all squeezed into a compact setting. Whether you are looking for love or not, don't miss a visit here. It's just so much fun.

If you're going to do this like a local, stop at the spring of freshwater, the tenmizuya, to purify yourself before you enter. 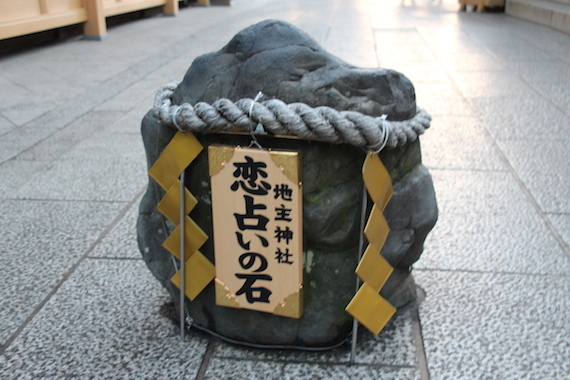 Jishu Jinja's most famous sacred object is the Koi Uranai no Ishi, the love fortune stone, believed to enhance love luck. One of the basic principles of Shintoism is that divine energy and spirituality can reside in natural objects: trees, mountains, water, stones, so many things.

Bound by a Shinto shimegawa straw rope, the Koi Uranai no Ishi stands at the top of a short staircase that leads to the main altar. Everyone stops to give it a pat.

Before you go up the stairs to the stone, look to the right at the bronze statue of a man in ancient Japanese dress and a very happy rabbit. 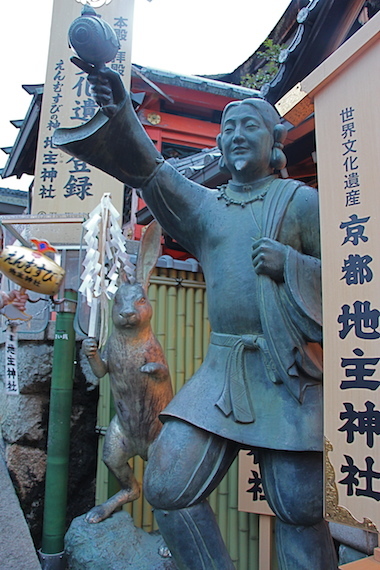 The man is the Shinto god Okuninushi. He has been a number of things in the heavenly pantheon, among them the ruler of spirits and magic. The rabbit is his special friend. In an ancient myth, Okuninushi helped the poor animal when it was in agony. In return, the rabbit predicted Okuninushi would meet his true love. And, as the story goes, he did! The two of them are iconic figures for love shrines. Be sure to pay your respects on the way up the steps.

Hanging just above the happy rabbit is an ornate gold-painted object that looks something like an overweight hammer. Pick it up and shake it.

Marked with the words enmusubi (to join together), this magic hammer belongs to Okuninushi. For the Japanese, enmusubi is a symbol of the love bond and is most often found at love shrines and written on love charms. Shaking the hammer here at Jishu Jingu is supposed to sprinkle some of the god's love luck on visitors.

Now go to the top of the stairs and pet the rock.

The lucky stone has a twin just a few yards straight ahead. The myth is that a person looking for love must close their eyes and walk from one stone to the other. 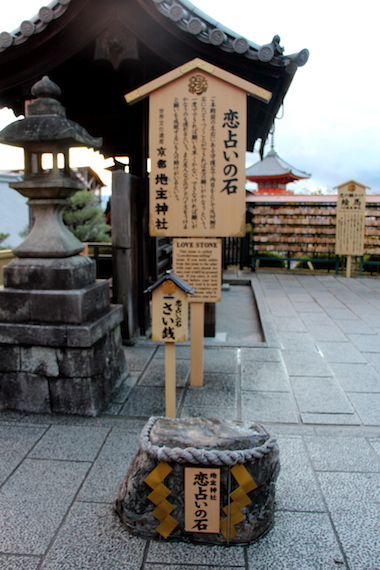 This is where you walk the Jishu Jinja walk of love. Photo by Gail Nakada.

No helping from friends or they, in turn, must also walk-the-walk in order not to jinx the ritual. Foreign and Japanese visitors one after the other try the walk (it's not that hard) cheered on by those in line.

Here at the top of the hill is the main altar plus several sub-shrines clustered close together. Colorful and intricately decorated, they all make beautiful photo ops.

Be sure to stop at the shrine for Ebisu (toward the back, on the right). He's the God of Fisherman and Good Fortune from the Seven Gods of Good Luck and another guy with a magic hammer. 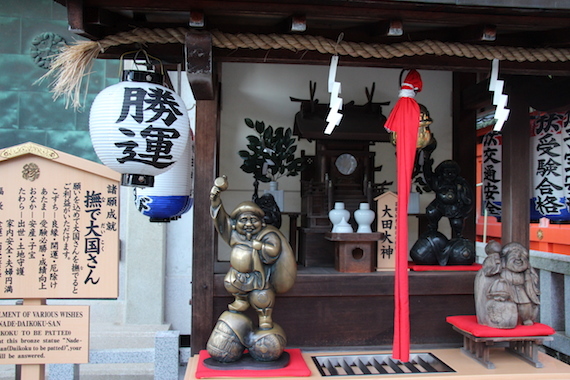 The Ebisu Shrine at Jishu Jinja is hands-on. Notice the same triumphant pose as Okuninushi! Photo by Gail Nakada.

After tossing a few coins in the offering box, bowing, and making a wish, visitors are supposed to rub the statues -- there are several -- for an extra boost of good luck. Go ahead. It's fun to have permission to actually touch these objects.

Another popular stop is at a table containing an offering box and thin sheets of white rice paper. Visitors make an offering, take a piece of paper, and carefully write their wish. 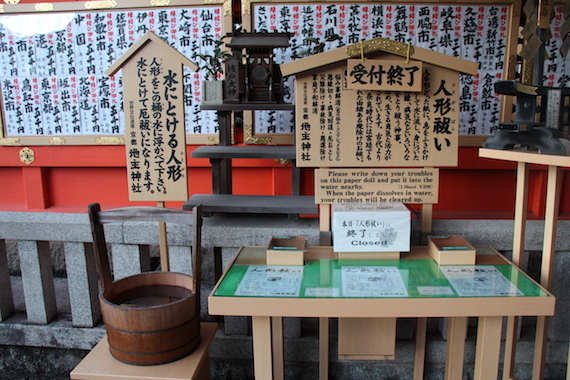 Write your wishes on the rice paper and place it in the water. Notice the 'closed' sign? We did not make the 5 p.m. cut off. Photo by Gail Nakada.

Once that's done, they place it in the large wooden container of clear water blessed by the priests next to the table. As the paper dissolves, they ask their wish be granted.

Back down the steps by the shrine store selling charms, go to the left to visit the ornate Inari Shrine and its fox guardians. Inari is the God of Rice and by association, commerce. Rice was the old measure of wealth. The foxes are both guardians and divine messengers carrying the wishes of the people to the god. 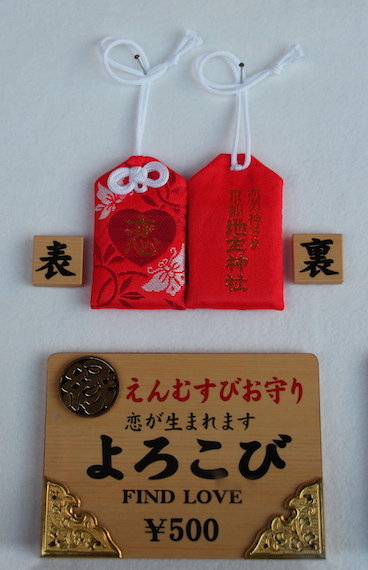 Charms are clearly marked in English at Jishu Jinja. Photo by Gail Nakada.

What to Buy: Love charms, of course, but also shiawase omamori, charms for happiness, since this shrine is considered a very happy place. There are several types of enmusubi omamori (love charms) and all have signs in English to help you make your choice. Prices start at just 500 yen. If you are already married, you should just buy one enmusubi charm as a couple since this symbolizes your strong union will not be divided. Happiness charms have no such restrictions -- so spread the love!

Access: From Kyoto Station, take the 100 express bus or the 206 bus to Kiyomizu Temple. Walk up the hill. After passing by Kiyomizu's brightly painted gate and pagoda, look for the stone steps to the left. Up the stairs is the entrance to Jishu Jinja Shrine.

Hours: 9-5. They begin shutting things down a little early at the upper shrine. If you want to write your wishes on rice paper, be sure to arrive at least by 4:30. The lights go out promptly at five.