A Texas high school student who protested taking what he called an "unneeded" test spoke truth to power on Twitter, and ended up getting suspended for it.

Kyron Birdine, a junior at Arlington High School, will be graduating under TAKS testing standards. Regardless, he was made to take the state's new STAAR standardized test, which was implemented in spring 2012 and won't affect his graduation or college entrance prospects. Birdine thought that sitting through the test was a waste of time, and he decided to let state and local education officials know about it -- via social media.

In the essay section of the STAAR test, Birdine wrote, "I have the TAKS test to study for, not this unneeded craziness," followed by the acronym "YOLO" (you only live once) and a smiley face emoticon. He then took a photo of his response with an iPad and tweeted it at Arlington Independent School District and the Texas Education Agency (TEA). 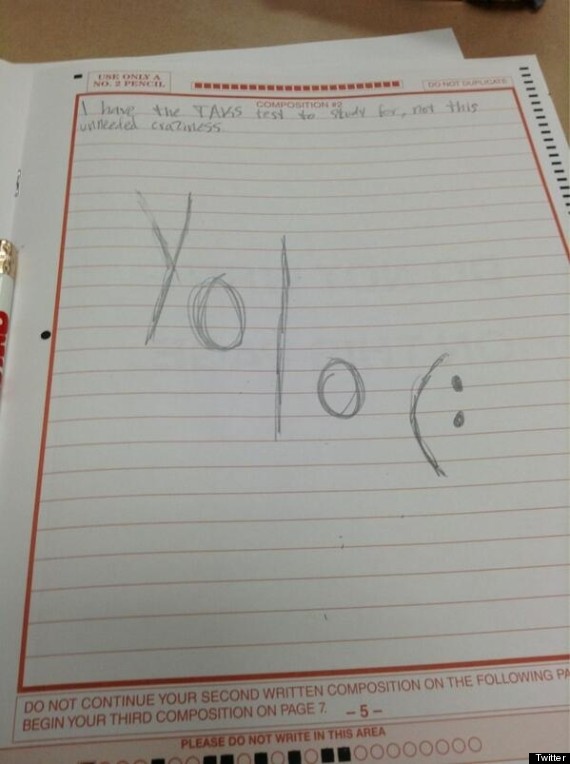 School officials pulled the boy out of class and suspended him for four days, reportedly calling the tweet a breach of security.

Arlington ISD released a written statement to press about the incident:

Today there was an incident with a student tweeting a picture of an answer booklet for a STAAR field test. We have made an initial report of the incident to TEA and will continue to investigate further. The student has been punished in accordance with district disciplinary procedures.

BuzzFeed reports that a Twitter hastag, #FreeKyron, has sprung up in support for the suspended junior.