Last weekend, I went with friends to check out several promising exhibitions at various L.A. galleries. At three of those galleries, we were fortunate enough to meet the artists and talk with them about their work. 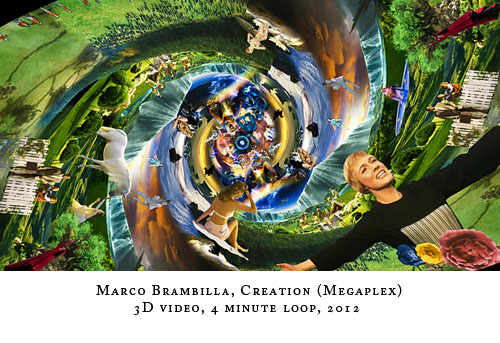 You may remember that a little more than a year ago, the New York-based artist Marco Brambilla had a well-received exhibition at the Santa Monica Museum of Art. Now, his latest 3-D video is projected in the darkened front room of Christopher Grimes' gallery. And, once again, we hear throbbing music by Prokofiev accompanying the vortex of video clips that the artist has borrowed from hundreds of movies. 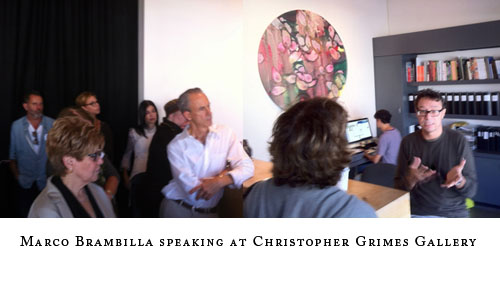 Imagine that you are looking at a colorful mosaic, when suddenly every piece of it begins to violently spin into the depths of some mysterious tunnel. Horses, beautiful naked people, Arnold Schwarzenegger flexing his muscles, Julie Andrews from The Sound of Music: all these and more appear for a fraction of a second, only to be swallowed into the operatic and unnerving grandeur of this latest video work from Marco Brambilla, titled Creation (Megaplex).

There is no way that this video meant to be a commentary on the 24/7 media coverage of the last days of the presidential campaign. But, there I was, in a dark gallery, overwhelmed by waves of visual information and unable to resist the beauty of those swirling images, but, at the same time, feeling in danger of being swallowed myself. 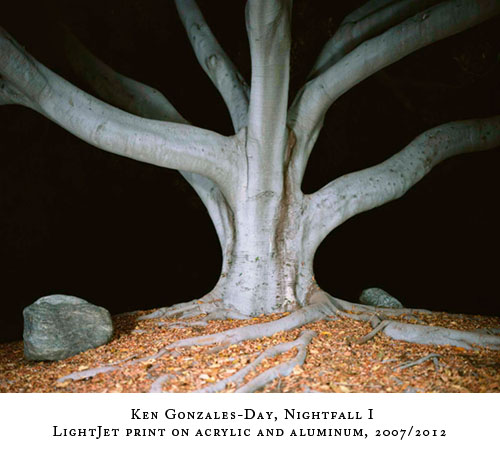 Next, we stopped at the Luis de Jesus Gallery to meet with L.A. artist Ken Gonzales-Day and see his new exhibition of photographs, including the well-known image of two male faces seen in profile. These are bronze portraits from the Getty's collection, one depicting a white male and the other a black man, staring at one another across a wide divide. Looking at Gonzales-Day's photographs, your first impression is of the elegant beauty of the museum objects he has chosen as his subjects. But the cool surfaces of these photos are always impregnated with palpable racial, ethnic and cultural tensions. 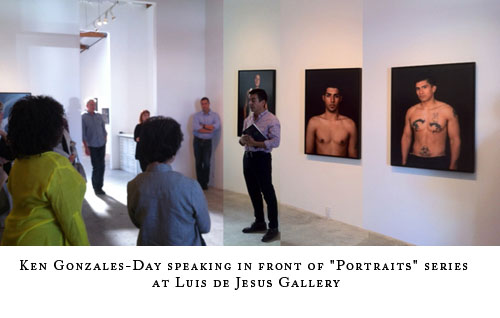 One of the images in this exhibition is of a gigantic, old tree shot at night. The artist found a horrifying archival photo of a tree with the bodies of young Hispanic men hanging from its branches. Subsequently, Gonzales-Day was able to find and photograph this very tree. The resulting large photo is installed in the gallery across from several portraits of young Latinos, chosen by the artist for their similarity in age to the lynching victims. 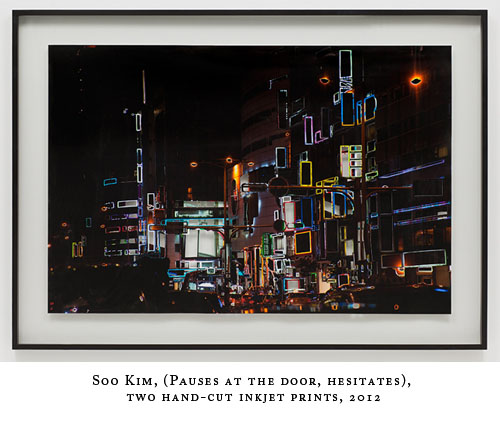 The first impression one gets looking at Soo Kim's photographic works at Angles Gallery is of an elaborate movie shot of a bustling modern metropolis at night. There are layers upon layers of complex architectural forms illuminated by bright neon signs. But, come close and pay attention -- these are not traditional photographs. The surface of each of Kim's works has numerous voids, cut by the artist. When, for example, you look at a building, you see holes where windows used to be. As a result, each of her photographic works has a complicated relationship between its positive and negative spaces. 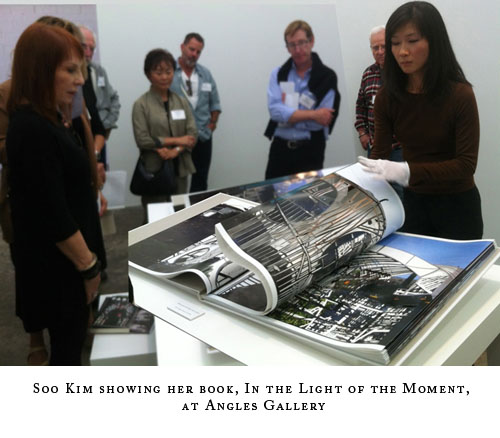 The tour de force of her exhibition is a unique, oversized book consisting of 25 photographs, each hand-cut in Kim's signature style. The inspiration for the project, which took her several years to complete, is the famous utopian community of Arcosanti in Arizona, which celebrates the combination of architecture and ecology. Watching the artist carefully leaf through the pages of her book, I thought about how much idealism, obsession and determination goes into completing the artistic projects that resonate with us.