How do you locate an American school bus that’s headed for a second life in Guatemala? That was the first challenge facing director Mark Kendall, whose feature debut, “La Camioneta,” tells the story of the yellow and black American standards that travel south of the border to be repurposed into colorfully painted “camionetas,” or Guatamalen public transport buses.

The ambitious documentary, which ends a sold-out run at the Los Angeles Film Festival today, isn’t the children’s story it might sound like on paper: camioneta drivers are among Guatemala’s most endangered workers, targeted and often killed by organized crime rings hungry for bribes. It was this world of extremes that Kendall, a freshly minted graduate of the School of Visual Arts in New York, found himself plunged into after launching his documentary in a Spotsylvania County school bus headed from Texas to Guatemala City. It's a scene no documentarian would ignore, but how does one get there in the first place?

We asked Kendall exactly that. Now crisscrossing the much milder festival circuit, he took a moment to talk the ins and outs of total immersion filmmaking. Read on for a rundown of “scrappy” research techniques, lucky breaks, and the auction every good camioneta-hunter knows to attend.

How were you able to follow a bus from start to finish the way you did? I knew the first important thing to do was find a place I could go where I’d intersect with whoever it was that was going to be buying the bus, and let the whole process unfold from that moment. I began with my own sort of scrappy research: looking on eBay, Craigslist, Googling, just trying to find out where these communities of people exist. My research ended up pointing me to the 422 Bus Auction in New Castle, Pennsylvania.

Was it a straight shot from there? Not at all. There happened to be a guy from Guatemala at the second auction we went to who bought three buses for his dealership in Houston. He was interested in participating. He was going to leave that afternoon with two buses daisy chained together and come back the following week to take the third. That worked out perfectly for us -- we flew into Pittsburgh, and waited for him to return.

We waited, and we waited. It sort of reached a critical point, almost a week and a half after the auction, when we started to wonder, "should we just get on a plane and go down [to Guatemala]? I really didn't want to do that. I was committed to the idea that the story had to be told on the ground, so visually there’s a connection between the Americas. One of the big themes of the film is mobility and exchange, and the quest for freedom of movement. So I was stubborn. I refused to fly down. Right at the last minute, when we were on our very last straw, we finally got a call from him and he said [his] buddy Mingo would be there tomorrow. He said [we] could go down with him.

We flew out at six the next morning, met with Mingo and explained what it was that we were doing. And he was super cool. We spoke for two and a half hours, just sort of explaining that we want to follow this bus down and engage in this process of its transformation and he was like, “Sure, come along for the ride. My brother-in-law runs a junkyard and that's where it's going.”

So you had an in once you were there.

Exactly. And that made a huge difference. Violence on camionetas is a really sensitive subject, especially when you’re coming in from another country.

How did you approach it?

It was something we had to feel out throughout the process of making the film. I didn't push in any sort of investigatory way. That wasn't really the idea for the film. But I think it was disarming that we had taken this journey with Mingo on the bus through Mexico.

What's the process of transforming a camioneta once it's arrived? The first thing they do is sand the bus down so any bumps or abrasions or chips in the previous paint job become smoothed out. They paint it grey pretty much everywhere and put newspaper on the areas they want to protect, cover the windshield, take the windows out, paper up the door. The painter creates a design purely based on eyesight. Sometimes he’s already done buses on that route before so he sort of knows the style of that route. But a lot of the times the owners [of the bus] will come in with a picture and say, “This is what we want it to look like. I really like this guy’s hood, but I want my trunk to look like this, and I definitely want more chrome.” The painter’s job is to create the vision of the owner. He uses all different kinds of tape, different colors of tape, different sizes of tape, and makes this intricate pattern. It's incredible to watch.

CLICK through for images taken during the filming of "La Camioneta":

WATCH the trailer for "La Camioneta": 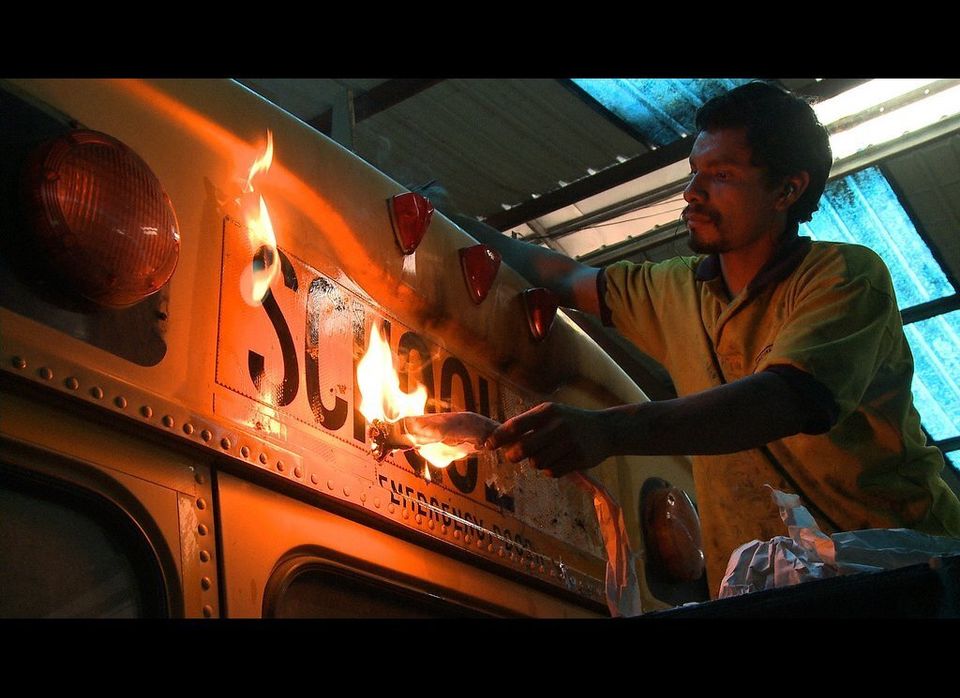