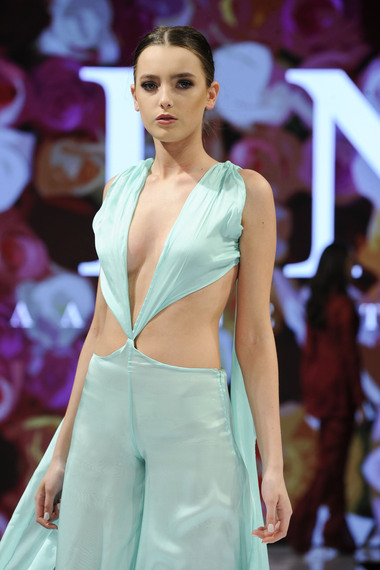 Los Angeles Fashion Week started Monday night with Arts Heart Fashion presenting their largest spring showcase to date, with over 40 designers showing their work on the cat walk in the Taglyan Complex in Hollywood and which continues through today Thursday March 17th.

Opening night's designs were sexy and bold, including ready-to-wear, bridal, evening wear, couture and red carpet cocktail to the delight of the fashion cognoscenti at the standing room only event. Art Hearts continues its tradition of showcasing established designers as well as providing a platform to launch up and coming trend setters in the fashion world and giving a platform to artists across the fashion industry. 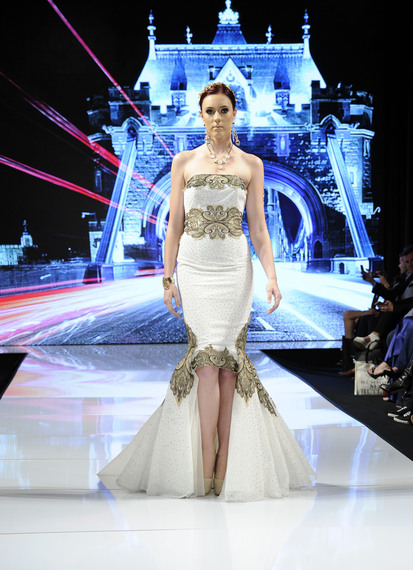 Sponsored by AIDS Healthcare Foundation who are committed to raising $20 million in care by 2020, as well as VHI Save the Music Foundation, Art Hearts continues their tradition of giving back joining again with Make A Wish Foundation for the eighth year in a row, and also working with the Institute of California for the first time bringing 14 young designers to showcase on Thursday afternoon.

Backstage on opening night was a whirlwind of organized fashion compression as 40 models worked with designers to present over 150 looks over the course of the evening's sound and lights show. 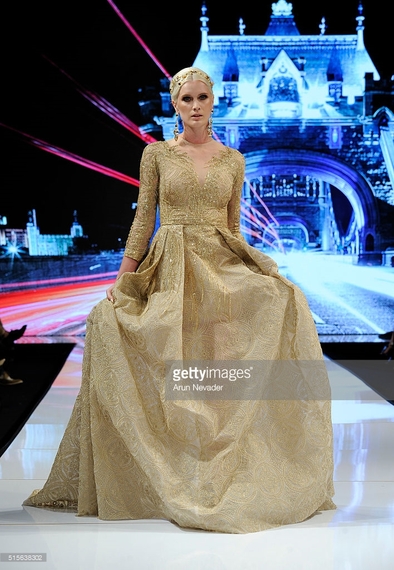 Monday night brought six designers to the fore, including Yas Couture by Elie Madi, a luxury designer who's a native of Lebanon. His extensive craftsmanship was on display from body hugging full length sheer evening wear to glammed out gold lame gowns with encrusted beads and rhinestones. Full length black and gold evening wear with capes, were followed by black and gold lace up bodices with plunging necklines. Common elements of fringe, trains and hi-low hems, created a stunning effect, on short and long gowns. 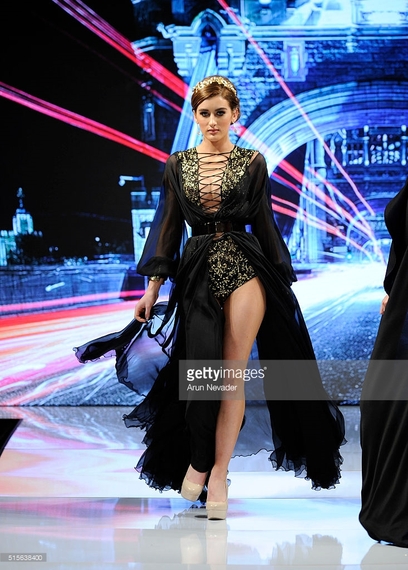 His use of white and gold over sheer nudes, and beaded fringe on long and short sleeves created an elegant line that feels part celebrity, part aristocrat and part super hero. The final design was an extraordinary strapless white wedding gown, with a full balloon skirt, with a rhinestone encrusted bodice. The highly charged show was sexy, vibrant, playful and elegant. 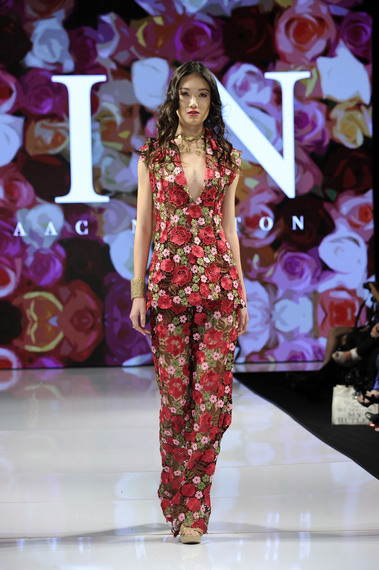 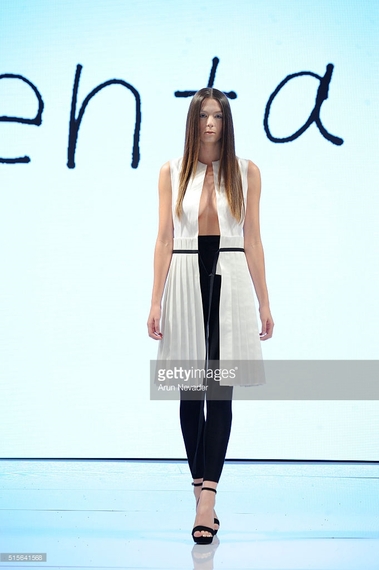 Kentaro closed the first show with an extraordinary exhibit that would feel more at home as an art installation inside LACMA. His unique designs were matched by an original soundscape, that transitioned from the familiar driving club music to harsh dissonant electric sounds, which melded with a solo operatic voice and dissolved to a mostly two tone composition composed by Kentaro himself, who was trained classically as a musician and master pianist. 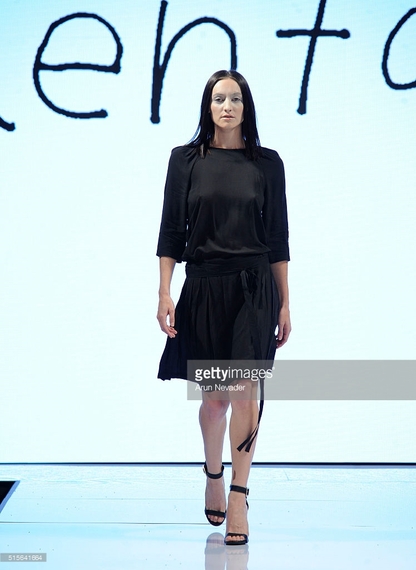 The models were directed to move unusually slowly, and had an equally unusual make up design of earthen tones that did not accentuate their lips or eyes. It created an unearthly pallor to the women, matching Kentaro's equally ethereal designs. Cocktail attire and gowns were in play, with bare backs and legs, predominately in white, black and bronze, but also had some models have a limb wrapped within a short gown, or another entirely enclosed in a white sheath, hiding her torso and arms. Two piece black and white cocktail attire with black leggings trailed black leather straps, and plain white tops were matched with unusual paper dresses with a silver-gold sheen. When two sexy black evening gowns came out, one short, and the other long with a train, and then a long silken white gown, followed by sheer white pants and a semi-nude sheer top, it almost felt out of place as the line defied expectations and felt almost anti-fashion, while also having an elegance of its own. 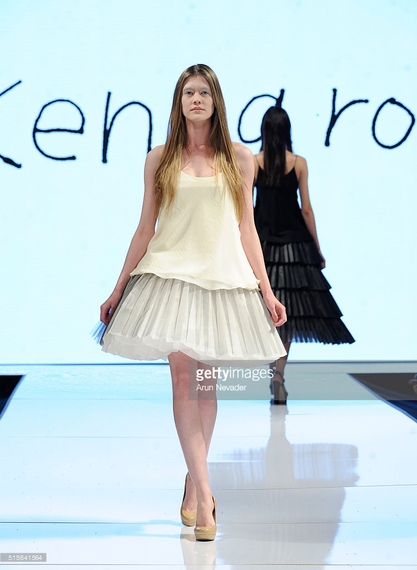 Speaking to Kentaro afterwards, he told me the entire line was thematically driven by the loss of a dear friend last year, and the entire work was an emotional and cathartic homage to her vitality in life, as well as her passing. The artistic designs that resulted are a celebration of her newfound freedom. 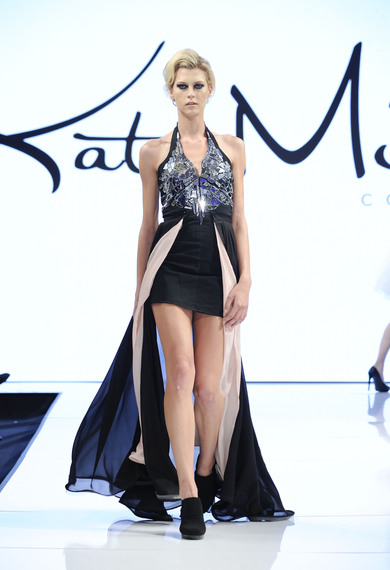 The late show brought out three great designers starting with Kate Couture by Kate Miles, with looks for young women. Her work is sophisticated and fun, she calls it 'elegance with an edge,' and it was. She runs the gamut from gowns, cocktail dresses, short skirts with a train, gowns and cocktail attire. Whites, golds and blacks, and lace and silks dominated. 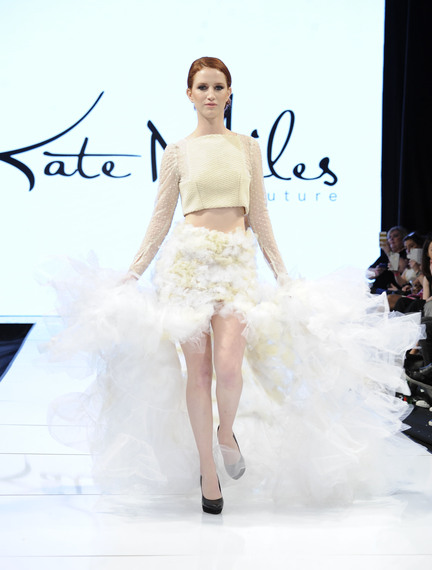 Her full length gowns and bridal designs were innovative and artistic, one white skirt with a train of white and yellow feathers and a long sheer sleeve gold top dazzled, as impressive was a black and silver encrusted gown, bare shouldered,with a hi-low hem. Her work is elegant, without taking itself too seriously, which is perfect for her market who want to dazzle and be seen without feeling artificial. When you learn the designer is 17, her achievements are all the more stunning. Her designs are delightful pieces. 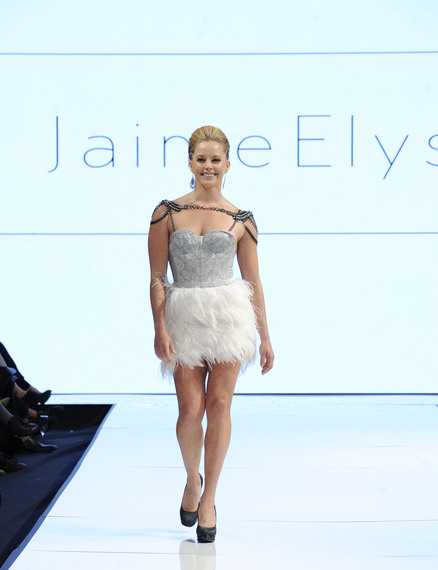 Jamie Elyse had a terrific show, bright and hip designs from a designer whose work varied from casual, to evening wear to bridal, to couture showing a great range of artistry. She started with a full length shoulderless dress made entirely of dark feathers. Her formal wear, is sleek, sexy and stylish. Feathers, lace and silk dominated, and her ready to wear style is inspiring. There were fun combinations of a white feather mini dress with a silver bodice, as well as black pants with a black shouderless top and faux fur micro-jacket for the shoulders only. 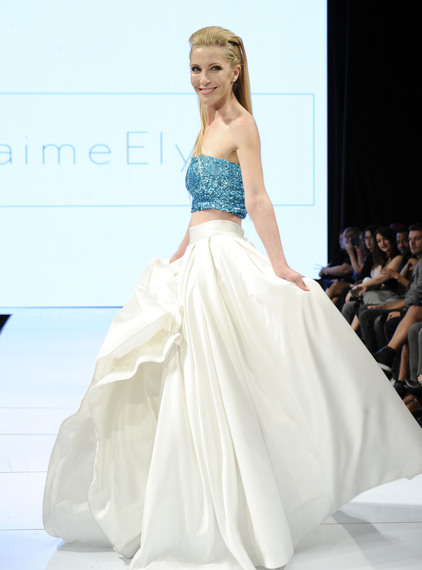 Even though she can create theatrical pieces, most designs were meant to be evening wear and club friendly, and be more timeless. There she succeeded, inspiring the two actresses sitting next to me, Vanessa Cloke from "The Big Short', who wanted to take two of the pieces home and Amanda Markowitz who was very impressed not just with Jamie's designs, but her model choices, unusual by most standards, which included mature women, short as well as tall models, and fuller women as well as having the most ethnic diversity of the evening. "It made me feel great for my industry," said Markowitz. 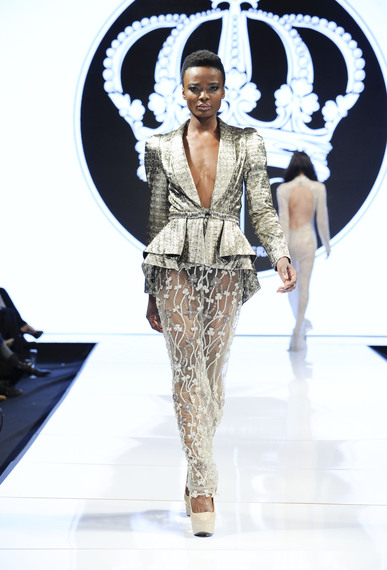 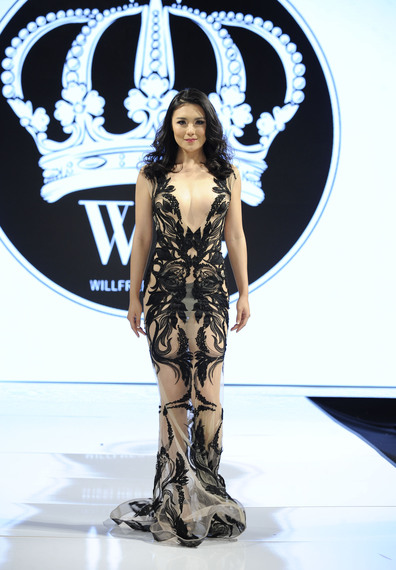 Ninel Conde, Chiquinquirá Delgado, Alejandra Espinoza, and Daphne Joy are known to be a few of 's star studded client list, and his couture felt right at home in Hollywood for any red carpet, celebrity event. Perhaps Hollywood should look to him as the next designer for grand films that need a larger than life artistic touch. His work was fascinating.

Erin Whitaker of Parker Whitaker Productions, who produces the event along with Sarah Whitaker and designer Erik Rosete, the designer of Mr. Triple X, whose new line showcased on Wednesday and always impresses with bold cutting edge designs, says "We are a launch pad for taking artists to the next level and elevate their career." Pointing out that the fashion showcases aren't just theater, she said;" People who come to these shows are not just designers and buyers, but consumers as well. They'll go to showrooms and go on line and make those sales."

Wednesday night also featured one of fashion's new heavyweights, Walter Mendez, who some feel is one of the world's next top designers. His work is regularly featured on celebrity clients such as Jennifer Lopez, Ciara, Selena Gomez. Thursday night will feature Rocky Gathercole, among others, the avante garde designer whose work you've seen on Paris Hilton and Katy Perry.

Art Hearts Fashion continues to grow, impress and set trends for the fashion world in Los Angeles, and is becoming the go to LA institution for fashion showcases during LA fashion week's fall and spring fashion celebrations.