Opening night designer Sue Wong dazzled the invitation-only standing-room crowd with a breathtaking 79 look show of her 2016 Alchemy & Masquerade runway collection of intricately adorned gowns topped with soaring headpieces. The provocative, bold styles rocked the runway shifting between elegant and outrageous, in classical Sue Wong style, straddling the line between couture and wearables, all with dramatic red carpet panache. Starting with black and silver themes, in silk, lace, chiffon and ornate sequined and beading, the luxurious styles alternated from strapless gowns with exotic patterning to evening wear, cocktail dresses, a kaleidoscope of hues shifted through the show until wedding gowns and formal attire ended the evening, continuing to defy expectations with a mythic royal grace, and earthy goddess attraction.

As always Sue Wong brought in additional artists to augment her designs with Jewelry and headdresses that delighted and were extraordinary, including 31 headdresses credited to Maritza Regalado of Atzi Designs who confessed to me the theatrical nature of such an ambitious show had its dangerous moments. Backstage during the event drastic re-shaping of some of her head piece designs almost happened when last minute adjustments were required due to model's head sizes or hair designs that were unexpected. Fortunately for all, the back stage teams kept everything in perfect order as the models hit the runway and every design remain intact. 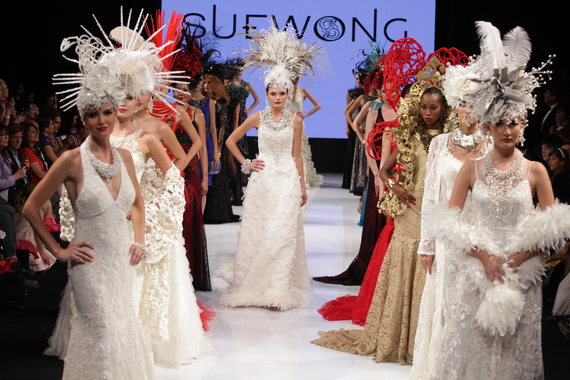 Sue Wong's show was introduced by British actor Max Ryan of "Sex and the City". And she received a pre-show honor from the the California State Assembly with a special recognition award in honor of her excellence in Fashion across the world. "I'm getting so many awards lately," she said, "you'd think my career is winding down, but I'm happy to announce it's just revving up!" she said to applause holding a framed plaque from the city. Her show ended with a performance by her friend pop opera star Michael Peer, who sang the signature song from Phantom of the Opera. Sue Wong continues to show her powerful artistry has perfected the balance between theatrical red carpet wear and artistic form fitting designs, with a career command of her craft unparalleled by many designers. 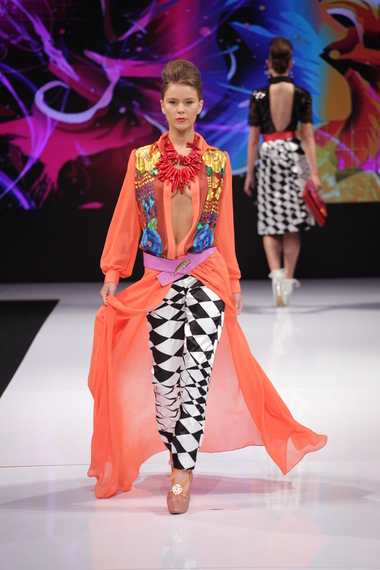 House of Li-Jon: once again impressed with striking metal and Swarovski crystal creations, which are intricately woven ring by ring to achieve graphic patters and art designs. Her shows last year with her intricate designs were stunning, and this year continues that work with her theme; "Armored and Dangerous", ready for war or peace if you mumur the right words to her sultry warriors as she takes fashion to the battle fields with a modern stance in the 'Art of Chainmaille'. 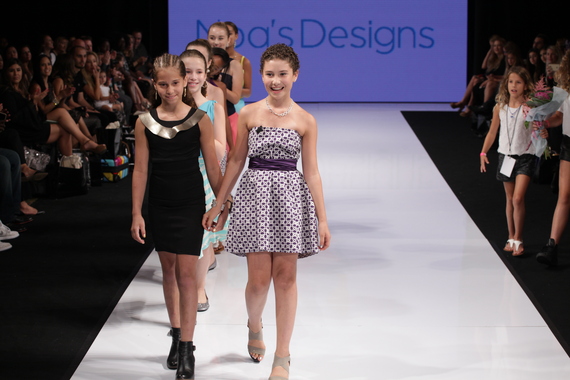 Tuesday brought an extraordinary turn as Noa Sorrell, who was diagnosed with Hodgkin's Lymphoma last January at the age of 11, was granted an extraordinary wish from "Make a Wish Foundation" and Arts Heart Fashion, and brought her fashion designs to life on the LAFW runway. An extraordinary story, but while Noa was undergoing three months of chemotherapy she began drawing and designing clothes in bright colors because it cheered her up. Returning to the sewing her grandmother had taught her, she began to create the clothes in her imagination. She reached out to Make A Wish, and Noah opened up Tuesday's show with her own collection of childrenswear, an impressive and spectacular feat; "Noa's Designs". She says; "I have worked very hard on a spring collection that that celebrates life with warm lively colors that can make anyone smile. No matter how grey you feel inside. I hope you enjoy it!" 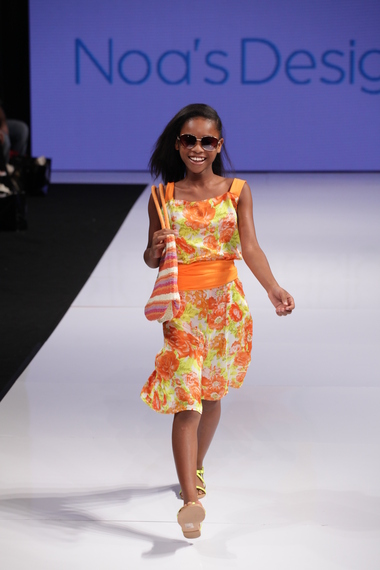 Noa's collection opened the Kidswear show, October 7th, a fan favorite which last season drew in celebrity 50-Cent to support his young son Sire's debut on the runway. Art Hearts Fashion has granted several wishes for Make-A-Wish kids during shows in LA, NY, and Miami highlighting the two producer's (Erin and Sarah Whitaker) commitment not just to emerging talent, but of working with many charitable organizations.

Nicole Miller, another fashion heavy weight, delighted on Wednesday with her spring line, a powerful collection of colorful, body conscious women's clothing, from evening wear to cocktail and wedding dresses. Playing with textures and earth tones, and a self professed fabric junkie, Miller's new designs were eye catching and sleek while remaining feminine. Best known for her timeless yet form-flattering dresses, Nicole Miller draws inspiration from both sides of the pond, as she studied at the Rhode Island Schol of Design as well as l'Ecole de la chamber Syndicale de la Haute couture Parisienne. Her progressive style of clothing has been worn by celebrities such as Angelina Jolie, Joss Stone, Jennifer Aniston, Beyoncé, Blake Lively and Eva Longoria among others. Her designs have forged a legacy in the fashion world, and always remain sexy as well as aesthetic. Her line is most notable for being so ready to wear.

Stello (formerly MTCostello) followed with a wild, bodacious boundry breaking line called "Hotel California" celebrating the body and dangerous liasons. The new "Hotel California" collections falls under the glamorous spell of Hollywood, while flirting with the dangerous rock'n'roll lifestyle. A beautiful guitarist in a black full length leather gown rocked a solo performance as models displayed designs that were daring full length evening wear, to sexy playful cocktail and bedroom attire, to couture that was more suggestions of clothes, ever defying the audience's expectations. 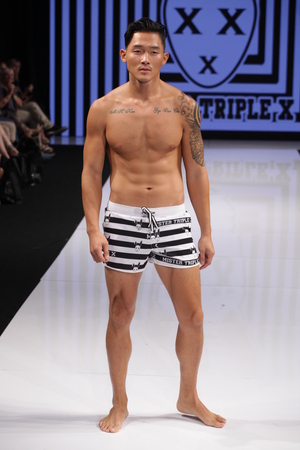 
Mister Triple X had two appearances, the Vortex swim/resort collection, with daring prints with metallic accents, and brought an exciting retro spin with his signature edge. And "One Rose", which was a more sophisticated expression of his aesthetic. Bold prints, and audacious cuts with metallic accents took the concept of sleek and racy into a high fashion expression. Erik Rosete who designs Mister Triple X is also the founder of Arts Hearts Fashion. 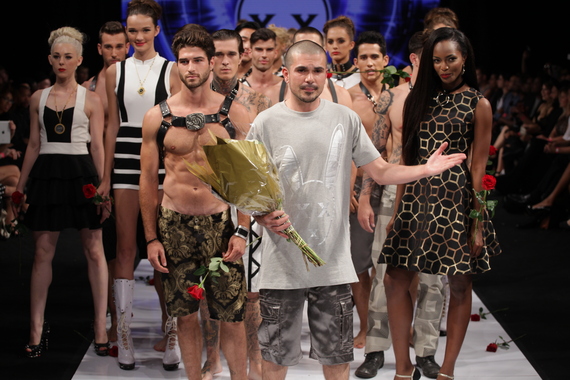 For more information on Art Hearts Fashion. Like the work? Hit 'become a fan' next to my name up top and receive notifications.