SANTA FE, NM- Whenever I wander through the halls of the historic La Fonda Hotel, the "inn" at the end of the Santa Fe Trail, I think of the 2006 film, Night At The Museum. When the exhibits come to life, the ensuing chaos scares the wits out of the new-hire, night watchman Larry (Ben Stiller), making him wish he'd never agreed to take the job. 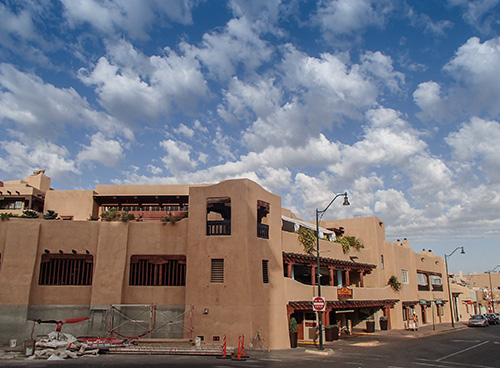 It's a bit like that for most visitors to La Fonda, except that once they've looked around they never want to leave.

According to La Fonda Spokesman Ed Pulsifer, not a day passes at New Mexico's oldest "inn," on the 400-year-old Plaza, that the reservations desk isn't besieged by hopeful travelers begging for a room, of any kind or size. No matter that the hotel is sold out. Or that the ghosts of gunmen and mountain men, mule-train drivers and fancy ladies linger in the Plaza after midnight. Everyone wants the chance to spend the night lulled to sleep in the reflected glow of the hotel's enchanting "relics" -- paintings, murals, Spanish Colonial figurines, pottery, hand-painted tiles, and Pueblo and Navajo motifs. 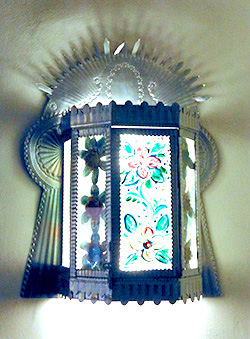 "We have dozens of guests who reserve the same room for the same dates every year," said Pulsifer. "They're like family, people that the staff know and look forward to seeing." Even during the recent renovation of the room and corridors upstairs, he explained, the hotel remained open for business and fully booked. "We couldn't really turn people away, especially for holidays and festival weeks, like Indian Market," he said. "You have to call months ahead for those dates. Summer and the Opera Season, it's the same. Even during the off seasons we average 89 percent occupancy."

Why? Because the La Fonda isn't just a hotel. It's an institution, a tradition, an architectural benchmark, a family vacation destination, and for local residents, a meeting place. More than any other single public or private building in Santa Fe - even the Palace of the Governors - the La Fonda's blend of Spanish Colonial, cowboy, Mexican, pioneer, and Native American cultures has defined what we think of as Southwestern art and styles. 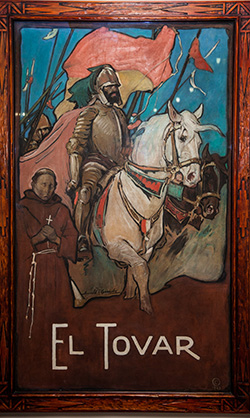 And this metamorphosis happened quite by accident. Built in 1922, La Fonda was just one of several hotels located on the same site since the year 1610, when Santa Fe was founded. By 1926, when La Fonda was just another hotel, the city, hoping to encourage tourism, leased it to the Fred Harvey Company, owner of the Harvey House Hotels, tourist inns promising good food and comfortable lodging to westward bound passengers aboard the Atchison, Topeka & Santa Fe. Calling upon Mary Jane Colter, the company's leading architect & designer, the Fred Harvey Company enlarged and redesigned their new property, with Colter consulting on both the interior and exterior decor. Her preference for folk and indigenous art and choice of artists to work on the project created the hotel's unique identity.

If you're visiting soon, you're in for a nice surprise.

In 2009, the Plazuela Restaurant was renovated, restoring many of Colter's original designs. The sky-lit ceiling was improved to let in more light and the tiled fountain was returned. The hand-painted windows surrounding the restaurant were also restored, and hand-crafted furniture and fabrics were chosen to match the original look. In 2012, the hotel's 167 guest rooms were completely renovated under the direction of Architect Barbara Felix. The renovation, which began by rebuilding the walls, permitted a complete upgrade of the infrastructure, from the air conditioning and new plumbing to the electrical wiring, communications connections and addition of top-quality insulation. 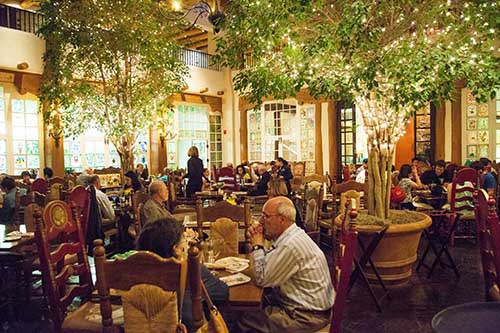 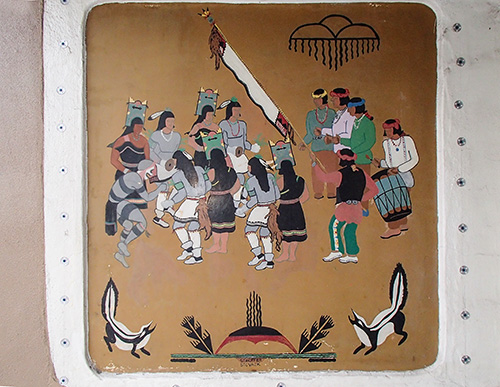 Restoration and maintenance in the lobby and main floor lounges is ongoing, as always. But for long-time guests who like it as it was, the best of the hotel's crafts and art remain in place. "Do You Wander?" asks the pamphlet describing the self-guided art walk, its cover featuring a photo of Concierge and Historian Steven Wimmer. If you do, waste no time, treat yourself to La Fonda's many treasures. And for more information and -- most important -- for the reservations office, go to www.lafondasantafe.com. 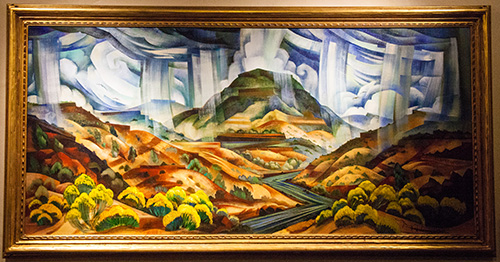