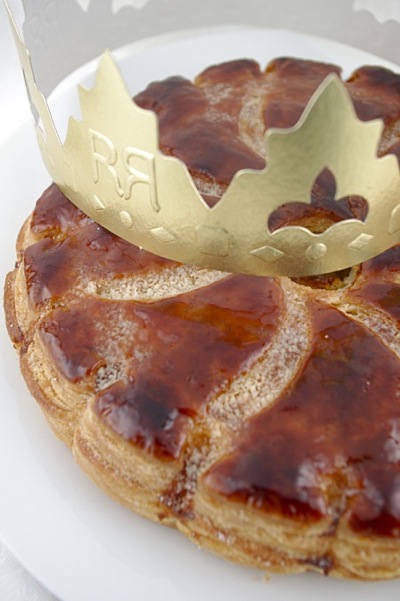 The plate is set before me, the aroma of warm pastry and almonds whirls up around my head. I inhale deeply and breath in all the goodness, the scent of cozy winter afternoons in front of a roaring fire, snowy days bundled up under a thick blanket, dog at my feet, a mug of hot tea in my hand and this delicacy, this thing of beauty placed before me. Layer upon layer of flaky golden pastry, its sugary, buttery flakes cradling a rich, rum-kissed almond cream in which hides a very special prize. And like all great French fashion, it comes with the perfect accessory: a golden crown.

Many of us are winding up the Christmas season by packing up the decorations, taking down the colored lights and disposing of the tree. The last of the turkey or ham has been sandwiched between bread and eaten, the fruitcake and Panettone, the cookies and the Stollen all devoured. The gifts have all been opened and enjoyed and the last card has been stamped, sealed and sent. Now we approach the 6th day of January, the Twelfth Day of Christmas, the Epiphany, Three Kings' Day, the day, as the story goes, on which the Three Magi arrived in Bethlehem and carried gifts to the baby Jesus. To celebrate the occasion, the French fete this joyous occasion with a very special pastry, la Galette des Rois, The Kings' Cake.

We all know that many well-known and loved symbols and traditions of Christmas are originally of pagan origin: the decorated tree, mistletoe, the Yule log among others. In fact, during the early years of the religion, the Christmas festivities were actually pushed up to the end of the year to coincide with the Winter Solstice and thus overlapped the pagan Saturnalia, a most popular Roman celebration marked by rambunctious behavior, overall silliness and fun and games, somewhat more joyous than the traditionally solemn Christian celebrations. Little by little, the Christians absorbed some of the practices that highlighted these non-religious pagan festivities. It is thought that originally the day of Jesus' birth, celebrated on December 25, was reserved for strictly religious observance while the Epiphany, January 6 was a day of celebration, the day of giving and receiving gifts, a day in which some of the less than religious practices were merged with the gift-giving of the Magi.

In France, this day, January 6, the Epiphany, is known as Le Jour des Rois, Kings' Day. And in France, this day is feted by the eating of La Galette des Rois, the Kings' Cake. This special cake of pâte feuilletée, puff pastry, filled with almond cream, frangipane, wasn't always reserved for this day, but was eaten on most festive occasions when frivolity was called for. Little by little it found it's way to representing the Epiphany and Kings' Day. But did this grow out of the story of the Magi, the cake representing the Three Kings and their gifts or did it come from the Saturnalia celebrations whose parties were characterized by the tradition of the reversal of social roles in which the king became servant and the servant became king? Either way, tradition has it that a lucky charm, originally a small fève or bean is buried in the almond cream before the top layer of puff pastry is placed atop the cake and then baked. When the cake is served, the youngest child of the party scoots underneath the table where he cannot see what is happening above and as the cake is sliced the child shouts out the name of the recipient of each piece. Why? Because whoever finds the bean in his slice of Galette is named King for the Day, the accompanying paper crown perched atop his or her head. And what is the role of the king, you ask? Why, to offer the guests another Galette! It's a day of indulgence, frivolity and merry-making! 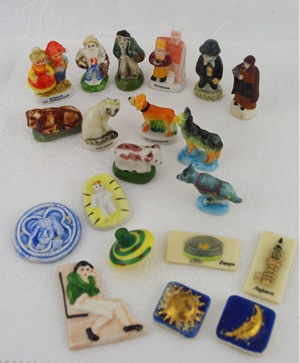 Our tiny collection of charms.

Legend has it that for quite a while the King, the person who had discovered the bean in his slice of cake, was obliged to buy a round of drinks for everyone in the room. But those who were too stingy to pay would often just swallow the bean with the cake to avoid being named, so somewhere during the 19th century the bean was replaced with a tiny ceramic charm, less easily swallowed, sometimes representing a religious figure but, more often than not, simply a tiny decorative charm, simple or fancy. Collecting these charms soon became a craze and people today are known to search far and wide and spend crazy sums of money buying special charms for their collections.

Beginning just after the New Year, glass cases in every French pastry shop are lined with Galettes des Rois, filled not only with the traditional almond cream but with chocolate or fruit fillings as well. Every year I buy one or two over the course of the week or two of their short-lived appearance and we all enjoy these wonderful, rich confections. But this year, I have decided to make my own! It starts with homemade puff pastry, easy to make although rather time consuming, or store bought if you like, and then simply filled with a luscious filling of ground almonds, softened butter, sugar and an egg and flavored with rum and vanilla, whipped together in the flash of an eye. And a fève of course, tucked inside for one lucky King.

Enjoy it, for the season is short. 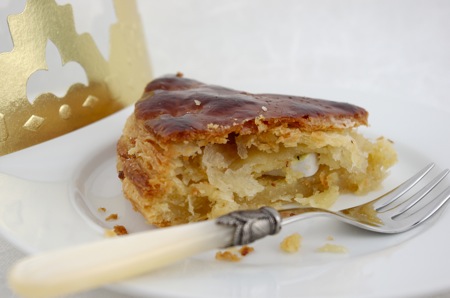 I referred to Julia Child's Mastering the Art of French Cooking for quantities and procedure and then adapted to my own taste.

* I followed this recipe which yields slightly over 2 ½ lbs (1 kg) dough and I used a tad more than half of the prepared dough.

Prepare the Frangipane filling:
Beat the sugar and butter together until fluffy. Beat in the egg, the ground almonds, the vanilla and the rum. Add more vanilla or rum to taste, if desired. Place the filling in a small bowl covered with plastic wrap or in a lidded plastic container and refrigerate until ready to use. It needs to firm up before assembly the cake.

To prepare the Galette des Rois:
Roll out the puff pastry to a thickness of ½ inch (1 cm) and not less than 3/8 inch, long and wide enough to cut out two 8 or 8 ½-inch (21 cm) discs. Using a cake tin or plate of about 8- or 8 ½-inches (21 cm) diameter and using a very sharp knife, trace and cut out two discs. Place each disc carefully on parchement-lined baking sheets, cover with plastic wrap and let rest in the refrigerator for 30 minutes. 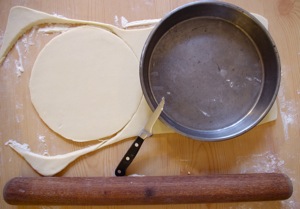 Stack remaining dough (don't mash together into a ball as you would other dough), wrap in plastic wrap and store in the fridge for another use.

Remove prepared rounds of puff pastry. Choose one to be the bottom of the cake a gently press with your fingers the edges out a bit to enlarge the circle slightly. Remove the chilled almond cream from the fridge and mound in the center of the bottom disc of dough. Press it flat and out, using the back of a soup spoon, leaving about 1 ½ inches (4 cm) border of dough free around the edges. Press a fève, a ceramic charm of some sort, or even an old-fashioned dried bean or a coin into the almond cream. 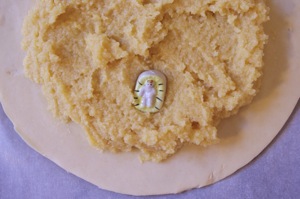 Paint this wide edge of the dough around the almond filling with the egg wash. Gently place the second disc of dough on top of the filling placing the top and bottom discs edge to edge (so the edges meet all the way around). Press to seal.

Place a bowl upside down on top of the discs - the bowl should come up to ½ to 1 inch from the edges. Using a sharp knife held perpendicular to the table, cut into the dough to create a scalloped edge to the cake. Now carefully carve a design into the top of the cake. Cut a small circle in the center of the top dough disc and insert a chimney (make a chimney out of parchment or foil or, as I did, use an upside down aluminum pastry bag tip). 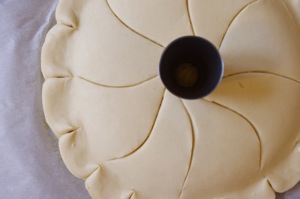 Brush the top of the dough with egg wash. Place in the hot oven and bake for 20 minutes until the pastry is puffed up and golden brown. If you think the pastry is browning too quickly, simply lay a piece of foil over the top.

Reduce the oven temperature to 400°F (200°C) and continue baking for an additional 25 to 30 minutes until the sides of the pastry are also golden and crisp.

Remove the Galette from the oven and move the rack up one notch. Generously dust the entire top surface of the Galette with powdered sugar then place the pastry back in the oven. Now bake for around 5 minutes until the sugar has turned to a golden and very shiny glaze. Stand next to your oven and watch because (as you can see from mine) it turns to the perfect glaze very quickly then in the flash of an eye burns! You must watch so you can pull it out of the oven just as the last of the top turns a gorgeous golden and not leave it one second longer. 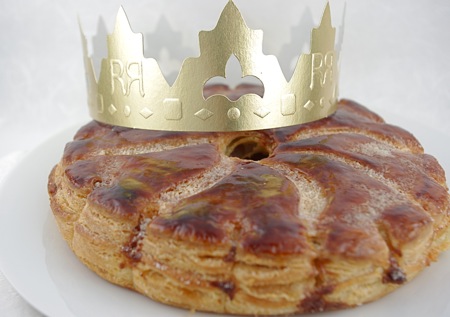 Allow to cool a bit. Serve warm (not hot) or at room temperature. Make sure there is a child under the table while the host slices and then passes each slice as the child calls out whom to serve. Have a paper crown ready to crown the King who finds the charm! And let the merrymaking begin!

Jamie Schler lives, eats and writes in France. To read more of her work visit Life's a Feast.