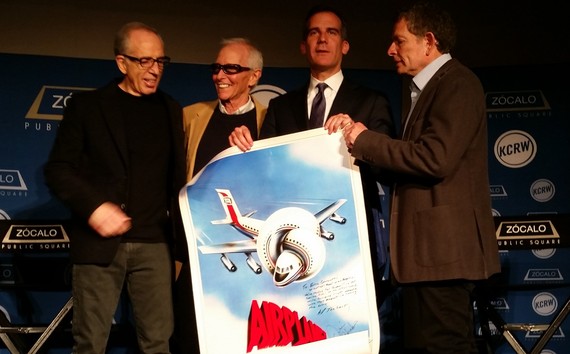 I've had a favorable impression of Los Angeles Mayor Eric Garcetti for some time. He's obviously well educated - a rarefied Rhodes scholar to boot. He's got a chipper, regular-guy demeanor, interesting Jewish and Latino roots, and a demonstrated affinity for pothole politics and the often unglamorous grind of governing a city, even a city renowned for glamor.

And now there's this: The 44-year-old mayor, elected a couple of years ago after a dozen years on the City Council, has very publicly declared his favorite movie to be - wait for it - yes! Airplane!, an icon of the unabashedly goofball genre.

Airplane! also comes loaded with a brand of shtick, which, 35 years after the movie's release, might make the more politically correct Angelenos feel, well, gagged with a spoon, to use some Airplane!-era phraseology of the San Fernando Valley, where Garcetti grew up.

Whatever you may think of the movie (and perhaps of Garcetti's parents for allowing him to see it when he was 9), give the mayor credit for a genuine show of cojones, considering the possible repercussions for any politician who says or does anything that might go unflatteringly viral and hyper-caffeinate the commentator class, as recently happened with President Obama's "latte salute."

Mayors are not presidents, of course, but as leader of the nation's second most populous city - and the world's entertainment capital, where countless media spotlights are ready to shine on any perceived gaffe - Garcetti has above-average reasons to be cautious about his every word and deed, although he did let that jubilant, seemingly premeditated, expletive fly last year at a Kings' Stanley Cup victory rally.

But his choice of Airplane! for a recent public screening struck me as refreshingly gutsy, and not just because of the 1980 film's potentially contentious content - you know, like the two black passengers who speak "jive," or the pilot's vaguely pedophiliac overtures, or the schoolmarm on the fictional Flight 209 who declines an alcoholic beverage in favor of snorting cocaine, or even a sight gag in which turbulence causes a mound of Jell-O on a tray table to jiggle along with the nearby bosom of a female passenger.

"I never looked at Jell-O the same way," Garcetti admitted, flashing a boyish grin, after having watched the movie from a front-row seat in the century-old, churrigueresque Million Dollar Theater at Third Street and Broadway.

The mayor had taken his place in a director's chair on stage, alongside Jim Abrahams and the Zucker brothers, David and Jerry, the trio who wrote, directed, and hit the stratosphere with Airplane!, and went on to make the Naked Gun comedies and other spoofs. The filmmakers and mayor spent a half-hour in light-hearted conversation with moderator Madeleine Brand, of public radio station KCRW, which co-sponsored the screening with the cerebral LA-based website Zocalo Public Square.

The sponsors had invited Garcetti to pick a film, any film, and - pundits and pollsters be damned! - the mayor chose Airplane! 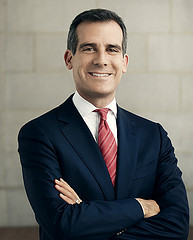 "Oftentimes you only see the serious side of people who are in public office," Garcetti said in introducing the movie. "My parents, Gil" - a long-serving former Los Angeles County District Attorney - "and Sukey, who are here, raised me with a good, goofy sensibility, that you have to be able to laugh at yourself, laugh at the world," he said, hailing the movie's makers as "three geniuses who reshaped what comedy meant - and for a 9-year-old it certainly was an exciting movie on all sorts of levels..."

The ornate 2,000-seat theater was just about filled to capacity, a testament to the film's enduring appeal and perhaps just a bit to the fact that the screening was free. The audience guffawed and applauded through the 90-minute movie, which surely has its share of zingers in the pop-culture pantheon (Robert Hays as ex-fighter pilot Ted Striker: "Surely you can't be serious." Leslie Nielsen as Dr. Rumack: "I am serious. And don't call me Shirely."). Garcetti's giddy mauve-and-navy-striped socks, plainly visible given the raised footrest of his director's chair, matched the merry mood in the theater.

"It's so funny to look back," Garcetti said. "I mean there's so many things you probably couldn't get away with doing now" - at that observation a knowing laughter rumbled through the crowd - "but at the same time it doesn't feel dated. It feels fresh, and everything about these guys' humor, which is what I love, is that it always seems well intentioned; there's nothing nasty about it. It always comes from a really good place. But it's sharp, too."

The mayor explained how picking a movie for the Feb. 26 screening had inspired a good deal of discussion in his office, with consideration given to selecting more weighty cinematic fare, like Chinatown or L.A. Confidential. If it was a film set in LA they were after, there is of course no shortage, and many other titles might have been safer choices, politically speaking.

Content aside, it was the context that also made Garcetti's Airplane! salute a PR risk because it coincided with an Academy Awards season rife with commentary about the need for greater diversity in Hollywood filmmaking. The latest cast of Oscar nominees was decidedly white, and such worthy contenders as Ava DuVernay, who directed Selma, which was up for best picture, and David Oyelowo, who starred in the historical drama as Dr. Martin Luther King Jr., were both left out of the nominations. (The night before the Airplane! screening co-sponsor Zocalo had hosted a panel discussion dubbed "Why Can't Hollywood Look Like America?")

Sure, Garcetti might have screened Selma, especially given its focus on the same tumultuous time as the Watts Riots. He might have invited director DuVernay (a UCLA alum, no less) to bring some color to the Million Dollar stage, which happens to be just a few blocks from where Garcetti was feted not long ago as a "Person of the Year" by the LA chapter of the NAACP, along with the Rev. Al Sharpton. Or if the mayor was keen on choosing an LA-based movie (the Airplane! flight departs from LAX), he might have selected such ruminations on race and class as Crash or maybe Grand Canyon.

But ultimately Garcetti really just wanted to show his favorite movie - his real favorite movie - and not just one that could make him look more, you know, mayoral. So Garcetti happily shared the stage with the three white men who made Airplane! About that choice some might have said: "Surely you can't be serious." What Garcetti was serious about, at least for this particular evening, was not being serious. And don't call him Shirley.