For many LA natives, the Los Angeles River was an eyesore, an afterthought or an embarrassment. Now, for the first time since the 1930s, a 2.5 mile stretch of the river is open to the public as a recreation zone for walking, kayaking or fishing without a permit. And a few Angelenos are taking to it like a fish to water.

Anthea Raymond of the Los Angeles River Expeditions and Kayak Club (and the former editor of Echo Park-Silver Lake Patch), was the third person to paddle on its waters last week. While she had done so many times before as a "guerrilla" kayaker, it was her first legal trek, reports CNN.

The river's revitalization project, decades in the making, does seem awesome. While the recreation zone is still paved in concrete, Malcolm MacDonald and his son show in a YouTube video uploaded Sunday that the waters are deep, fast and can support diverse wildlife. Of course, other parts of the river get so shallow that the kayakers have to step out of their boats.

Watch as the pair navigates between rocks (via LAist):

The river pilot program started Memorial Day Weekend and is set to end Sept. 2, Labor Day. Angelenos can play in the recreation zone from sunrise to sunset. Individuals can come for free, while organized groups who want to hold events or programs at the site must get permits first.

Take a look at where to park and where to start kayaking:

LA River Opens To Visitors, Angelenos Take To It Like A Fish To Water (VIDEO)
Evolution Of The LA River 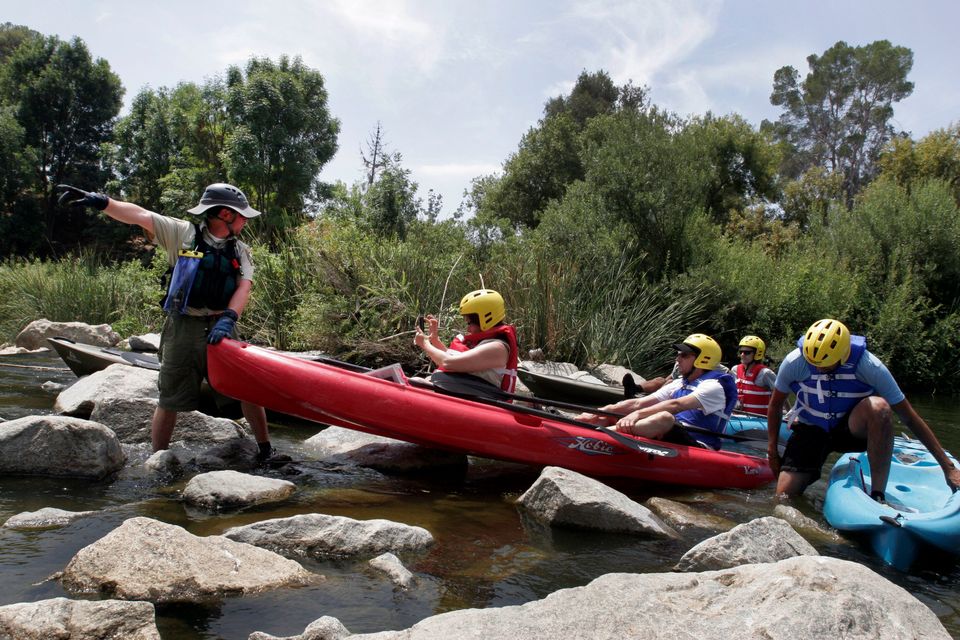 1 / 24
Tim Pera
This Aug. 12, 2011 photo shows Ranger Tim Pera, left, with the Santa Monica Mountains Recreation Conservation Authority, helps other kayakers over a rocky area during a kayaking trip along the Los Angeles River. For the first time ever a six week pilot program sponsored by the LA Conservation Corps will allow about 280 people to kayak one of the few stretches that actually look like a river in the Sepulveda basin. The effort was a decade in the making and required half a dozen local and federal agencies to sign off on the project. (AP Photo/Noaki Schwartz)
AP