We've come a long way L.A. since 2006, when pioneering river enthusiasts were forced out of the water with their canoes by helicopter cops who warned it was against the law to recreate in the L.A. River.

In the last days of the 2012 legislative session, Governor Brown signed SB 1201, legislation put forth by Friends of the Los Angeles River and California Senator Kevin De Leon that requires the L.A. County Flood Control District to include public access to the river for educational and recreational purposes in its management plan for the river. "It's a major step toward governing the river as a river rather than a flood control channel," said Lewis MacAdams, president of Friends of the Los Angeles River.

According to the bill...

... the river is subject to Section 4 of Article X of the California Constitution, which guarantees the public a right of access to the navigable waters of the state that must not be obstructed by any individual, partnership, or corporation, and to case law protecting the public trust. Therefore, the river must be held in trust for the public and managed for public access and use.

The flood control district is required to develop specific policies for improving access under SB 1201. That access is already opening. The summer of 2011 witnessed the first public kayaking tours on the river in the Sepulveda Basin region in Encino. The tours are operated by L.A. River Expeditions as managed by some of the original activists who boated the River to prove its navagability and importance as a public recreational asset.

In addition, the Glendale News Press reported on July 23, 2012 that officials expect to approve a set of guidelines for kayaking along a stretch of the Los Angeles River that flows near the Los Angeles-Glendale border by next summer. This natural bottomed stretch of the river runs from the Los Angeles Equestrian Center to the Golden State (5) Freeway overpass and is lushly green with views of the San Gabriel Mountains. "We certainly want people to experience the L.A. River in a different way than Hollywood portrays it," L.A. Conservation Corps spokesman Mike Mena is quoted as saying. "We want people to see the beautiful part, not the part that Arnold Schwarzenegger was blazing through in [Terminator 2: Judgment Day]."

Back in 2008, this author was among the supporters in Long Beach Harbor cheering the arrival of the first paddling pioneers to complete a public run of all 52 miles of the L.A. River. That expedition was carefully documented in photographs, film and in a 30-page report which became evidence for the EPA in its decision declaring the L.A. River navigable and therefore protected by the Clean Water Act. The EPA decision in 2010 released the river from the stranglehold of local agencies that had treated the river as a storm drain since the Army Corps of Engineers channelized it and lined most of it with concrete beginning in the late 1930s.

On Labor Day 2012, I had the privilege of joining an L.A. River Expeditions tour as an educator for a two-hour trip along a stretch of the river between Burbank Boulevard and Balboa Boulevard. It was a bit hard to find access to the river after I parked as instructed on the dirt along Burbank Boulevard. But after a short trip down a dirt path, I saw a cluster of brightly colored kayaks waiting for boaters beside a wide stretch of green water under the Burbank Boulevard overpass.

After some introductions, a river safety talk, and instructions on how to use our paddles, we donned our helmets and vests and walked our kayaks out into the water. The next two hours were sheer joy. Not only did I get to talk about the rich history of the L.A. River and the exciting developments in the current chapter of this great river, but I got to meet a wonderful group of adventurous residents of our fine city who shared the trip with me, and to encounter gorgeous wildlife and scenery. Not to say that the river doesn't need a lot of loving care to bring it back to a more natural condition after years serving primarily as a storm drain. We counted plenty of submerged shopping carts and other signs of careless consumerism like Styrofoam cups along the banks and the ubiquitous plastic bags that hang from the trees at high water mark like so much synthetic Spanish Moss. The abundance of plastic pollution was a sad reminder that two pieces of important environmental legislation did not survive this legislative session to make it to Governor Brown's desk. One law, SB 568 would have banned Styrofoam containers for take out food. AB 298 would have banned plastic bags from grocery, convenience and drug stores and required provision of recycled content paper bags for a fee. In jurisdictions that have adopted such laws, consumers tend to bring their own reusable bags. These two laws would go a long way to cleaning up both the L.A. River and the Pacific Ocean where the river dumps its load of plastic. Hopefully, California's state legislators will stand up to the plastic lobby and pass these vital bills next year, joining the many local jurisdictions that have already banned plastic bags and Styrofoam to-go-ware in our state.

Overall, my favorite part of the trip was the quiet time floating through our bustling city on a river that is really a river and could be almost anywhere far from the rush of city life.

My fellow adventurers, among the first couple hundred boaters to take this journey since the river was taken over by the Army Corps of Engineers in the 1930s, had the following observations about the outing:

Julius: When I pictured the L.A. River, I always thought of a long industrial bathtub best photographed in black and white as a backdrop for a film noir story. And since my only experience with being in, i.e. walking into, said so-called river was in one of those big, graffiti covered concrete basin sections (in Glendale), reality seemed to match perception. So, to paddle into a relatively narrow, tree and reed lined waterway where there was a perceptively yet gently moving flow where the river bottom was variable and thus actually affected the current, I was transported out of my Los Angeles reality and perception. This was a living, muddy, green river, which smelled of slightly fermenting vegetation and algae just like a river should. It cooled the air and balanced out the dry, arid plant smells from beyond the banks. Egrets, herons, minnows, tilapia, dragon flies were just the visible, obvious wildlife... the only marring of the setting was the surfeit of semi-submerged shopping carts and the periodic draping of the trees with plastic bags and rags at the high water mark.

Dakota: It was a good way to spend a holiday off work... something to talk about when I get back to work. Nature abounds in the city. Which brings the disappointment of viewing... all the trash, debris, garbage spewing out of tree limbs, water ways and banks of the river. Unfortunately , this was not appealing to my naturalistic senses. In fact, it saddened and reminds me how careless people are... The up swing of the trip was seeing thriving birds generally seen in zoos. There were moments of gratitude and peace floating back with the flow of the river behind us viewing the herons, guiding us ahead. The tour guides were wonderful. I felt secure with their knowledge... I hope in the future the authorities will see fit to clean the river and make it a more recreational space to cruise away from the city.

Richard: What surprised me the most was the amount of people already using the river for recreation.

I too was surprised when I discovered that our group of boaters was not the only human life enjoying the river. We saw fishermen catching small fish they intended to eat. We saw bathers splashing in the "waterfall" area where Balboa Lake overflows into the river. The people we encountered were just as surprised to see a group of boaters on the river, and many called out to us and even took pictures of our flotilla! Clearly, Angelenos are already using the river as a river, not just a storm drain, and we must demand that the river is restored within the full protection of the Clean Water Act to be safely "fishable and swimmable" as that act requires.

For more information on L.A. River Expeditions visit this site.

To become a Friend of the Los Angeles River visit here.

To watch a trailer and learn more about a prize winning documentary about the rebirth of the L.A. River see 'Rock the Boat.'

For a slideshow of photographs documenting the Labor Day 2012 1-3 p.m. river trip with L.A. River Expeditions see below. 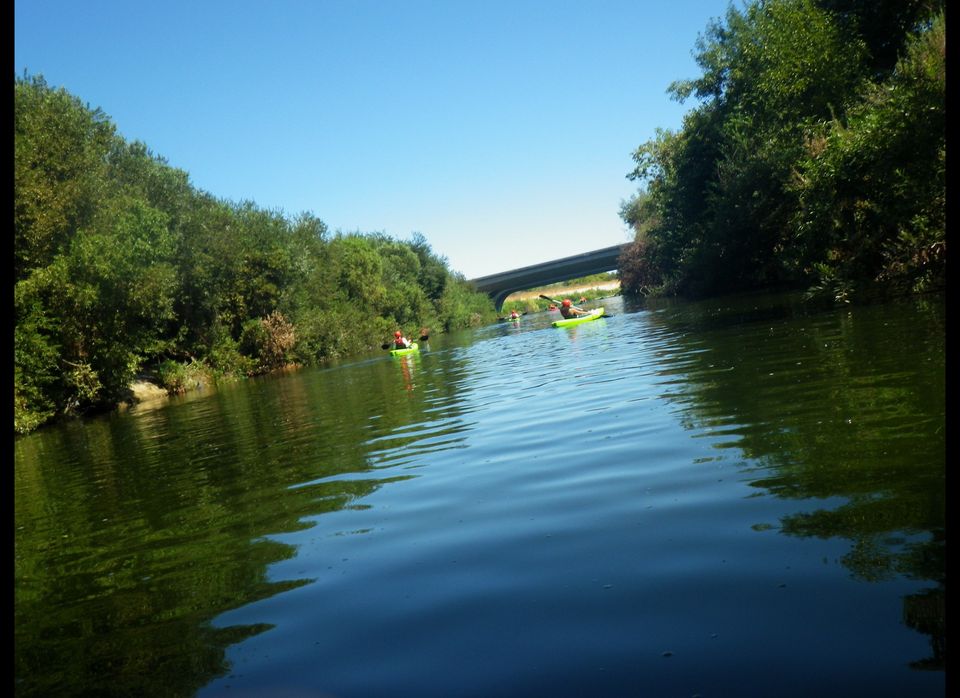 1 / 9
Kayakers enjoy a quiet ride through the city. Photo by Julius Galacki