The fight is on against possible Koch Brothers ownership of the Tribune papers, which include the Los Angeles Times and Chicago Tribune. 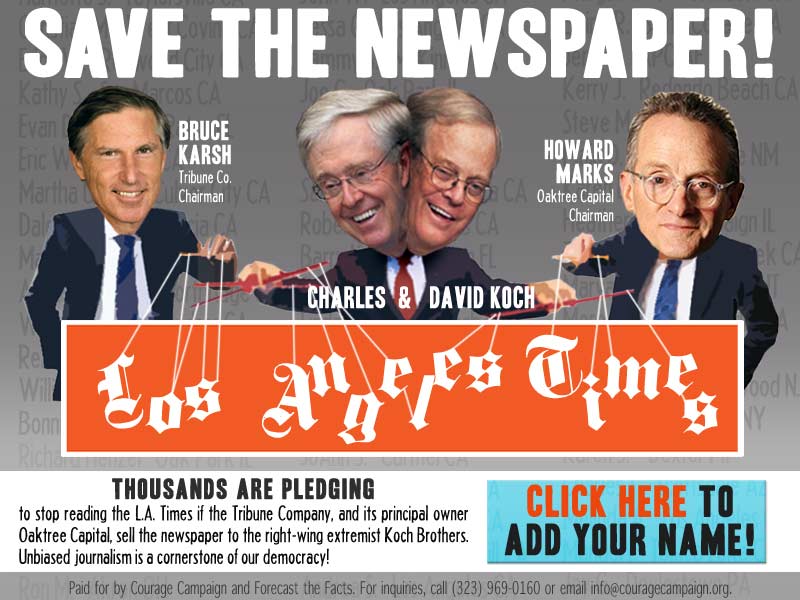 And they have the leaders of the California state legislature behind them. Darrell Steinberg, the California Senate President pro Tem, and John A. Pérez, the speaker of the California Assembly, said Wednesday that they would oppose the sale, the New York Times reports. Both men control seats on the boards of California’s major pension funds.

“I oppose it,” Steinberg said of a possible sale to the Los Angeles Times. “I believe newspapers are a public trust. The Los Angeles Times has a long and respected tradition of community leadership and impartiality. The Koch brothers have a long and demonstrated history of a rigid political ideology.”

About one-quarter of the assets held by Oaktree Capital Management, the leading shareholder in the Tribune Company, comes from public pension funds, Bloomberg Businessweek reports. In a letter sent Thursday to Bruce Karsh, president of Oaktree and chairman of Tribune Company, ten public employee unions warned that a sale to the Koch brothers “would be adverse to the retirement security of public employees whose pension funds you are responsible for managing and investing.”

The letter said the Koch brothers are “anti-labor, anti-environment, anti-public education and anti-immigrant.”

The LA AFL-CIO is planning a protest for next Tuesday in front of Karsh's downtown LA office. In addition to carrying signs, some of the protestors will wear Koch brothers masks, organizers say.

About 25 Chicago protesters gathered outside the Tribune Tower in Chicago Wednesday, the Chicago Sun Times reports. When their request to meet with Karsh was denied, they settled for presenting an oversized letter outlining their concerns about Koch ownership.

There are various online petitions against a Koch Tribune purchase, including by the Courage Campaign, by Common Cause, by Daily Kos/SEIU, by FreePress and by SignOn.org. There is also a letter to Peter Liguori, CEO of the Tribune Company, from Sen. Bernie Sanders, who claims in an email to have 65,000 signatures so far.

The Courage Campaign Institute and Forecast the Facts said that, with other groups, they delivered more than 250,000 signatures against Koch ownership to the Los Angeles Times headquarters in downtown last month.

LA City Councilman Bill Rosendahl also introduced a motion last week to pull city pension money from the investment firms that own the Los Angeles Times if they sell the publication to buyers who do not support "professional and objective journalism." The motion was also signed by Councilman Dennis Zine and Councilman and mayoral candidate Eric Garcetti.

In a recent in-house awards ceremony, half of the Los Angeles Times staff indicated that it would quit if the Koch Brothers bought the paper. The brothers are believed to be the only group prepared to buy all eight Tribune papers, including the Chicago Tribune, Baltimore Sun, Orlando Sentinel and Hartford Courant, as a package -- how Tribune would like to sell them.

However, a coalition of LA billionaires has also expressed interest in running the Los Angeles Times as a nonprofit, led by former Democratic mayoral hopeful Austin Beutner and including prominent Democratic donor Eli Broad -- but the group is not interested in buying all of the Tribune papers.

The Koch Brothers have not confirmed or denied their interest in the purchase. Melissa Cohlmia, a spokeswoman for Koch Industries, said in an email to the Los Angeles Times that about 30 percent of the company’s workforce -- 15,000 employees -- are represented by unions.

The Koch brothers have, however, sought to cut the benefits and influence of public unions, particularly in Wisconsin.

The union letter sent to Karsh Thursday said that selling the Tribune papers to the Kochs "would be akin to agreeing to selling your car to a buyer who you know wants to buy the car so they can run you over."