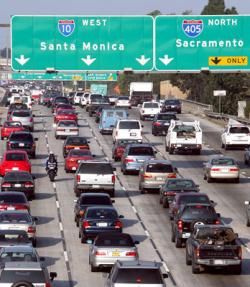 Before I moved to Los Angeles, I lived in Manhattan, where all I needed were my two feet, taxi fare or a metro card to get around. Then, I moved out to this traffic jam city and have been trying new ways to get to and from work ever since. I don't even have that bad of a commute ,as my office is only 9.2 miles away, but it still takes me anywhere between 45 minutes to an hour. I have found a few tricks here and there, but I'm not an expert, so I'm calling upon those who are. Maybe they can help us navigate LA better and hopefully save us a few minutes of our lives outside of our cars.

According to traffic information provider INRIX, the worst travel hour in Los Angeles is on Thursday's from 5 to 6 p.m. and not Fridays, which is nationally the worst day to commute. Also, if you can help it, avoid the Hollywood Freeway going Southbound approaching Vermont Ave., which INRIX found in their National Traffic Scorecard Report to be the city's nastiest bottleneck.

"I don't think there is anything typical any more for Los Angeles freeways. What once was called rush hour, turned into rush hours, then that morphed into basically one long, non-stop, never ending rush to stop or so it seems," says Kajon Cermak, Board Operator & Traffic Queen for All Things Considered on local NPR member station KCRW.

Advertisement
For the afternoon and evening commute, below are Kajon's tips on some shortcuts, preferred routes and secrets for driving in Los Angeles:

KTLA Traffic Reporter and native Angelino Ginger Chan says L.A. traffic is a tough nut to crack and that she uses seven different sources to help gather the most accurate and updated information for her viewers.

Advertisement
As a result, Ginger also shared some recommendations on how to avoid being parked on local freeways:

What are some shortcuts and LA traffic tips that you swear by?