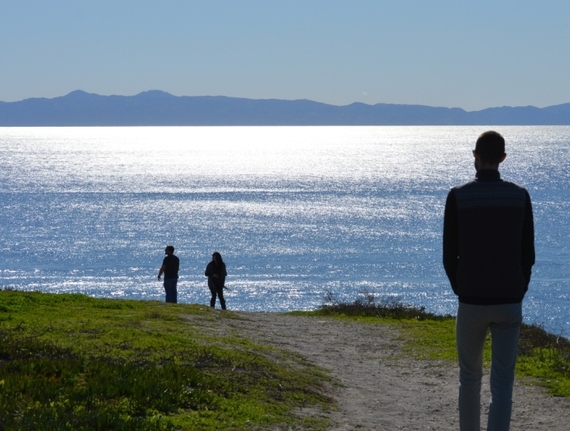 One of the biggest challenges of living in a city with 4 million souls is how to carve out a little piece of paradise where you can take a step back, take a deep breath and recalibrate your inner Chi. You don't need yoga or transcendental meditation to achieve harmony with the City of Angels. Sometimes the best spiritual connections can be had while going about your everyday life. Amazon notwithstanding, many workplaces are already using our mental well-being as selling points. The developers of El Segundo's elevon, where Big Block Media and other entertainment and tech firms have found a home next to the new L.A. Lakers practice facility, promote open green spaces with offices that extend outdoors. Hey, any environment that can potentially improve the Lakers' brain trust, I'm all for.

Most of us aren't lucky enough to have outdoor offices. No worries. Here are seven free refuges throughout the L.A. basin that are ready for your reflection when you are.

1. Angel's Gate Park in San Pedro - Most people know this park for its Korean Bell of Friendship, a Historic-Cultural Monument gifted by South Korea in 1976 that in itself inspires awe. Just south of the Bell Pavilion, the park slopes toward Point Fermin, affording majestic views of the shimmering Pacific Ocean with Catalina Island in the distance. This spot is extra powerful due to the fact that it contains old machine-gun nests that defended our coast when it was still part of Fort MacArthur. Model-plane hobbyists are drawn by the constant westerly breezes. You are too, but unlike them, you're riding your own spiritual plane.

2. Self-Realization Fellowship Grounds in Mt. Washington - Many Angelenos are familiar with Lake Shrine, the popular Pacific Palisades branch of this pan-religious organization, but its main headquarters are just as beatific. Spread out over 12 hilltop acres with stunning views of downtown, the grounds' spiritual core is the Temple of Leaves. Take the winding gravel path into its mini-forest and find a stone bench along the trickling stream as you channel the spirit of George Harrison's mentor, Swami Paramahansa Yogananda.

3. Sepulveda Wildfire Reserve - Enter off Woodley Avenue and find a sign in the far parking lot that declares this spot near Sepulveda Dam "A Symphony of Sounds." It's a laughable claim against the torrent of white-noise traffic from the nearby 405. But as you step onto a dirt trail that takes you toward a small lake, mellifluous bird sounds take over. Waterfowl like egrets and cormorants join in a harmonic convergence of chirps, trills and whistles, with duck and geese honks providing baritone notes - the Valley's natural philharmonic.

4. The Balcony at the Griffith Observatory - Dusk is the best time to decompress at Griffith Park's 1935 celestial citadel. Despite the ubiquitous crowds, a trip inside always makes you feel small and insignificant in a good way. But the Observatory's outdoor landings are just as uplifting for different reasons. Find a nook and take in the streets stretching toward infinity from your Art Deco aerie. The city's expansiveness beckons limitless possibilities. As a gentle breeze softens the sun's rays, it hits you that moments like this one are the reason you put up with this crazy metropolis.

5. Hansen Dam - No, that's not a misprint. This flood control basin is among the Valley's most popular recreational zones, but those are mostly confined to its swimming and fishing pools. In the center of the basin is a little-known lake surrounded by pine trees, accessible by a hiking trail from the dam. Genuflect on its sandy northern shore. Replace the noises in your head with the soothing sounds of rippling water and whistling wind through the trees.

6. Arlington Gardens in Pasadena - This little-known 3-acre sanctuary is designed to invite discovery. Wander its trails past vernal pools and lush succulents. Stumble upon labyrinths and hidden benches next to vine-cloaked statues. My favorite feature is the Wishing Tree, an idea popularized by Yoko Ono. Hanging from the branches of this crape myrtle are dozens of tiny papers flickering in the wind, each inscribed with often-poetic expressions of longing. Jot down your own wish and leave it in nature's hands.

7. The In-n-out Burger "Park" Near LAX- Many believe that biting into a Double-Double is a religious experience in itself. Now imagine taking your In-N-Out meal across the street to a small, unnamed park on the southwest corner of 92nd Street and Sepulveda Boulevard. It's where hundreds of people congregate daily to watch airplanes coming in for landings at Los Angeles International Airport. Loud? You betcha, but there is something spiritually rousing about being so close to a 747 you can practically touch its steel husk as it gracefully descends onto the nearby northern airstrip. The communal aspect is another plus. Ultimately, we're all on this mortal coil together, enjoying burgers on the grass as we forever gaze up at the heavens.