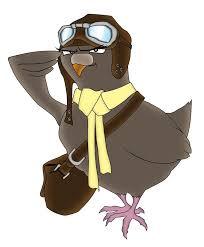 Interestingness is the instigator, the hardy pigeon that can carry your message most anywhere. Interestingness makes a message get heard above the noise. Money can't buy interestingness, yet vivid comparisons can create them. To make your self-label stick it must be more interesting than others' labels of you.

The good news and the bad is that reputations can be ruined or lifted by how most anyone labels something or someone - as long the label is as vividly indelible as India ink. More than money, title or even good looks, your capacity to craft the most vivid characterization will make it bob, like a cork, to the top of the water of alternative messages. A janitor can become more famous (and credible) than a CEO. Use the "Compared to What?" cue to stick your label in other's minds, whether they intended to remember or not. Make your comparison:

To nudge you to start crafting your "Compared to What?" label right now, consider the staying power of these real examples.

• Disparaging comparisons may be remembered, yet often make enemies:
"If you're watching cable TV to get the news, that's like going to Olive Garden because you want to live in Italy." ~ humor writer Andy Borowitz

"Patents, like plaque, build up in arteries, restrict flow of innovation in our economy. I'm worried about heart attack" ~ Venture capitalist, Fred Wilson, in a Tweet

• The more unusual the comparison the more it will stick in our minds:
"Parker has access to trends and signals that are invisible to many people. For him it's like hearing a dog whistle." ~ Shervin Pishevar of Menlo Ventures

• Make the comparison relevant for your audience:
"When we finish a storyline we let out little puff of white smoke like the Curia in Rome." ~ Leonard Dick, a writer for the TV show, The Good Wife and, previously for House, when interviewed for his Harvard alumni bulletin.

• The stages that something or someone undergoes can be grist for a comparison:
"The difference between salad and garbage is timing and chemistry. Perhaps the timing is right." ~ My friend Gary, when discussing a woman he'd recently met.

• A pithy "if-then" boosts memorability:
"If writing is a muscle, this is my gym" ~David Eaves, describing his blog

• Up the emotional wattage by tapping an emotion:

Startle: "In an age when more humans have access to cellphones than clean toilets..." ~ Anand Giridharadas

Poignancy: "When I was in the military they gave me a medal for killing two men and a discharge for loving one." ~ Leonard P. Matlovich's headstone

Like many of you perhaps I am drawn to some people because they are quotable, even if their topics are outside my usual interests. Who are some of the quotable people you follow? Some of mine are Atul Gawande, George Will, Umair Haque, Whitney Johnson, Roger Rosenblatt, Dorie Clark, Peggy Noonan, Nick Kristoff, Brad Thor, Olen Steinhauer, Michael Lewis Adam M. Grant and Dave Kerpen.