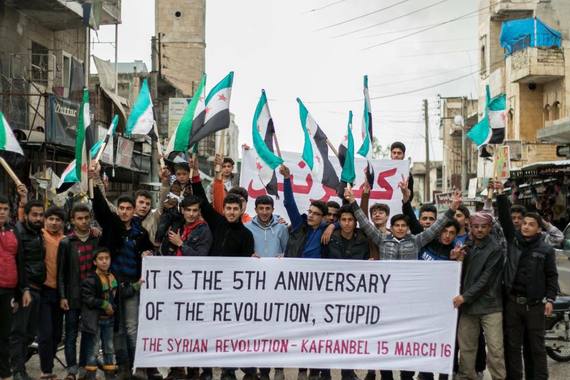 For five years, I have made a point of talking about Syria whenever the occasion arises, with people I know well and with many I barely know at all. I love being asked why I chose to become a lawyer so I can share stories of inspirational Syrian protesters who remain steadfast in the face of egregious human rights abuses. Politics and civil society, war crimes and acts of compassion, human suffering and absolute resilience - each of these topics has made for provocative and compelling discussion.

In the recesses of my internal psyche, Syria has become the axis of my world and the metric I use to gauge events around me; my belief that the Syrian street's demands are undeniably legitimate has not wavered. But in the media and the political sphere, as well as in my informal conversations, I have noticed the tone of conversation shift. The change in the narrative is especially important in the Syrian context because, since day one, there have been various competing versions of events: the Syrian people's narrative has been of a movement seeking freedom and dignity, the Assad regime's rhetoric has been of terrorists, infiltrators, and foreign conspirators, and the initial U.S. discourse was of support for the people.

On March 15, 2011, the first organized group of protesters took to the streets of Damascus calling for minor reform and chanting "the Syrian people are one" and "peaceful," indicating that their movement was wholly nonviolent. Three days later, the Syrian Army responded by killing protesters in Daraa. Over the next few weeks, Syrians organized peaceful protests throughout the country, making demands for essential reform that resembled the basic demands of Arab Spring protesters throughout the region: the release of political prisoners, a repeal of the emergency law, and the freedom of assembly and speech. Just like that, al-thawra al-sooriyyeh, thawret al-karameh: the Syrian revolution, the revolution of dignity, was born. And when I spoke of Syria, I spoke of revolution.

It was black and white: peaceful protesters seeking to live with basic human rights were being shot in the streets by the government and its mercenaries. Still, they were not deterred: "Death but not humiliation," they chanted. In 2012, even as the Syrian opposition began to take up arms, it was abundantly clear that the government, propped up by Iran and Russia, was the unlawful aggressor, and the defenseless people were desperately trying to protect themselves and their communities. Through the lens of Western media that seemed to echo the revolutionaries' narrative of nonviolent opposition turned reluctantly armed, the Syrian protesters were sympathetic.

Gradually though, the narrative in mainstream media and among policymakers shifted. Conflict or civil war, not revolution or popular uprising. Rebels or insurgents, not revolutionaries or freedom fighters. Al Qaeda's Syrian branch, Jabhat al-Nusra--an enemy of the revolution--somehow became synonymous with it. ISIS, which waged war on anti-Assad Syrians nearly a year before it began threatening the West, took center stage and became a primary global concern, eclipsing any discussion of the Assad regime's ongoing wholesale slaughter of the Syrian people.

And as the black and white merged into gray, this narrative being touted by Western journalists and diplomats permeated into my personal discussions. I grew tired of explaining to anti-interventionists that my people deserved to live without constant fear of barrel bombs, and that either a no-fly zone or anti-aircraft weaponry (or both) was necessary to accomplish that. I no longer wanted to explain that President Barack Obama's August 2011 call for Assad's departure did not transform the "revolution" into a U.S. ploy to effectuate regime change reminiscent of Iraq; that a popular revolution born in the streets of Syria was invariably different from a foreign occupation planned in the White House and Pentagon; and that President Obama's policies (especially his appeasement of Iran and his chemical weapons "red line") breathed life into Assad's killing machine.

It exasperated me that I had to justify the demands of the Syrian revolution to people who robbed Syrians of their agency, who dismissed the revolution without ever speaking to anyone from Syria because leftist "intellectuals" who barely spoke a word of Arabic convinced them it was a conspiracy. While I had grown accustomed to policymakers' simplistic reduction of the revolution to a foreign plot, I boiled with frustration when I had such discussions with educated individuals, many of whom are generally wary of imperialist overtures and firmly believe in a people's right to self-determination in every context but Syria.

I became more cynical, angry, and jaded than I ever could have imagined, and I knew that if I spoke of al-thawra al-sooriyyeh to anyone watching mainstream media in 2015, I would come off as a lunatic. So I too began referring to Syria as a conflict, not a revolution.

Late last month, the International Syria Support Group (ISSG) negotiated a shaky (and extremely flawed) "cessation of hostilities" in Syria. Although the Assad regime, its Russian ally, and opposition fighters violated the agreement (to varying degrees), the decrease in violence was tremendous. Most notably, the barrel bombing all but stopped, and Syrians felt free to protest en masse for the first time in years. On March 4, a Friday named "The Revolution Continues," Syrians held 104 peaceful protests throughout the country, renewing their basic demand for Assad's departure. On March 11, protesters once again came out to "Renew Their Vows" to the Syrian revolution. And on March 15, Syrians celebrated the fifth anniversary of the start of the protests.

The people of Kafranbel, a town in northern Syria renowned for its witty posters, sent a very clear message: "It is the 5th anniversary of the Revolution, stupid." While the English-language message was very much directed at Western commentators and journalists (who wrote about the anniversary of the "civil war" and "conflict"), it may as well have had my name written all over it.

History will not be kind to those who abandoned the Syrian people, and the Syrian people will not look favorably on those who conveniently and lazily reduced their revolution for dignity to a civil war. Revolutions are messy, and they parry with counterrevolutions such that they often descend into war, but the war in Syria would not be without the revolutionary spark that ignited it. So I have resolved to stop being stupid. From today onward, it's a revolution, never a conflict.